The ancient Greeks did not have a word for blue, and therefore, had a limited perception of it. They identified blue as a shade of green rather than its own color. This doesn’t mean blue was any less real; the ancient Greeks simply did not have the language for it and thus were restricted in their understanding of it.

But blue is everywhere we look: besides the obvious sky and ocean, there are also fluttering birds and butterflies, blooming flowers and berries. Surely the ancient Greeks were aware of some of these things. How did they not distinguish blue from other colors? Or at the very least, how did they never question the categorizations?

Being queer was my blue.

I was unaware of sexuality as a concept until I was about 12 years old. I spent my first dozen years experiencing the world through what I now know to be the confused lens of a repressed identity. Heterosexuality was as inherent and silently understood as my Mexican heritage: it’s what you’re born as and what you’ll always be. But as the ancient Greeks taught us, being unaware something exists doesn’t cancel out its presence.

My queerness has been part of my story since the beginning. It’s the easter egg of every chapter, only discoverable after getting through the chapters about self-discovery and growth. My queerness was confined to the background of every moment I’ve ever lived, waiting for me to look at it long enough to ponder its nature. My queerness was the understudy of my identity, standing behind the curtain, hoping to be called onstage.

My sexuality was never a question until nearly three years into adulthood. I spent over two decades in my “ancient Greek” phase. I came out publicly at 21, but more importantly, I came out to myself. And while that explained a lot, it also revealed more complexity.

Oppression. Discrimination. Scapegoating. And as I came to realize, erasure.

Now, as an out and proud 25-year-old individual, I’ve begun to reframe my childhood as one where I was always queer, even when I didn’t know what that meant and when my subconscious didn’t feel safe enough to acknowledge it. Reprocessing my most prominent memories in the context of repressed sexuality has immensely changed how I look back on my life.

I’m from a town on the southernmost border of Texas, which is predominantly Mexican, patriarchal, and Catholic. It’s also one of the poorest and most underrepresented regions in the U.S. Despite its growth and vibrancy, most of the population lives each day simply trying to make it to the next.

According to psychologist Abraham Maslow’s hierarchy of needs, humans must fulfill their basic physiological and safety needs before they can fulfill more complex ones of love, belonging, esteem, and self-actualization. We can’t develop intimate relationships, confidence, and creativity if we don’t have a solid foundation for survival, stability, and security. As you create that foundation, you can work toward the higher needs. If your base is wonky, reaching everything else will become more difficult.

While this isn’t a definitive structure for every human life, it helps conceptualize unfamiliar experiences. Thanks to systemic oppression, communities of color have struggled throughout U.S. history to meet their basic needs. Families of color disproportionately face poverty, illness, violence, and a myriad of other disparities. This means that not only do people of color have to spend so much of their lives focused on survival but reaching said higher levels becomes a luxury.

Imagine generations of working every waking minute simply to afford to live. Generations of fighting institutional oppression from all directions just to be allowed to exist. Generations of learning to dress, speak, act—to be a certain way to avoid harassment and being told: “Go back where you came from.”

This intergenerational trauma within families of color—mine included—inhibits our ability to understand our needs beyond survival. Any internal turbulence or uncertainty becomes an afterthought.

That’s why having the space to process, collectively and individually, diversity such as gender and sexuality is much more challenging. When your skin color already puts you in danger, having another identity to compound with that danger is terrifying. So terrifying it can lead to internalized and cultural stigma, which manifests as homophobia, misogyny, transphobia, and even racism and xenophobia. Anything besides “normal” is not socially acceptable and is considered “unnatural” because assimilating is what kept our ancestors alive. 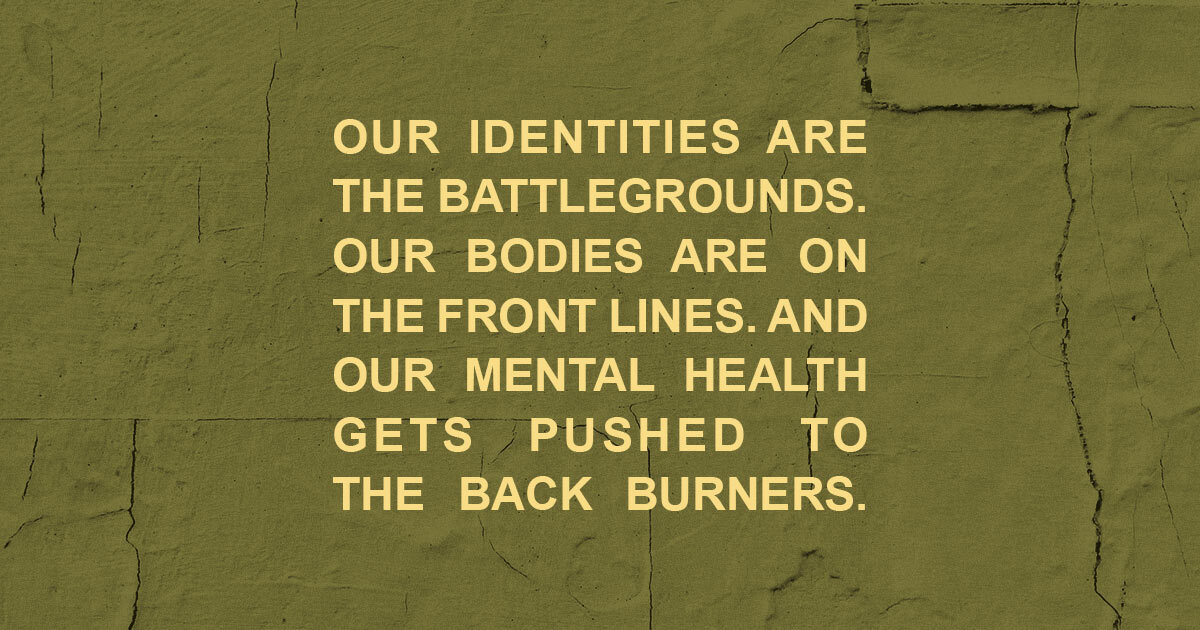 The parts of ourselves that take time to understand are suppressed by the lessons we’ve learned to live by. Many communities of color are held up by pillars of persistence, community, and strength. But these pillars often cast shadows of exhaustion, codependence, and repression.

We’re frequently unaware that those shadows follow us, even when we “break the mold” and rise to places that aren’t always welcoming. And sometimes, those unwelcoming places are within our communities.

This means that being queer is another way my life is at risk. For many like me, the phobia and hatred of stigmatized identities are partially rooted in a fear of how the world will treat us for defying expectations more than we already are.

This isn’t to say I’m always in life-threatening danger; I still have privilege as a cisgender, able-bodied, financially-stable person with the ability to be openly bisexual. My point is that the world is not as safe, welcoming, or navigable for me as it is for someone with more privileged identities.

We do not have the luxury to leave this fight, to stop thinking about it, to remove ourselves from oppression. We fight because we have no other choice. Our identities are the battlegrounds. Our bodies are on the front lines. And our mental health gets pushed to the back burners.

So to those with more privilege, know that we cannot march forward without you. Nor should we have to. True progress will never come to fruition without active effort from those around us. If you consider yourself an ally, consider what that means. It’s not enough to put a rainbow on your profile photo one month each year. If your allyship does not include consistently examining and leveraging your privilege for progress, it’s not allyship—it’s performance.

You need to know that being an LGBTQIA+ ally means being a BIPOC ally—because pride wouldn’t be possible without Black and Brown trans women.
You need to know that pride began as a protest and in order to honor that you need to march with us.
You need to uplift our voices in all spaces where voices can be heard, and actively listen when we speak.
You need to shut down ignorance when you see it, whether or not we’re around to praise you for doing so.

You are not weak for wanting or needing support. If you’re seeking professional help, we encourage you to use TWLOHA’s FIND HELP Tool. If you reside outside of the US, please browse our growing International Resources database. You can also text TWLOHA to 741741 to be connected for free, 24/7 to a trained Crisis Text Line counselor. If it’s encouragement or a listening ear that you need, email our team at [email protected].

In the aftermath of tragic events, it’s more than OK to lean on others for support to process what happened and all the emotions that will come in the days, weeks, and months to follow. You deserve space to start finding healing, no matter how long that journey lasts. These are a few local resources […]