We believe the stories we’re told as children—the pretty girls in white dresses whisked away by Prince Charmings, the simple resolution of true love’s kiss. As we get older, we learn that castles come with things like property taxes, and “happily ever after”s aren’t always a given. So, we set out to replace those fairytale endings we once held as truths with our new understanding of the world—our innocent eyes scanning our surroundings for evidence that we are loved, that we are worthy of the space we take up, and that even without magic, everything will be okay.

I could retreat back to the story of my childhood, the pain I suffered at the hands of those who were meant to protect me, or the eight addresses I called “home” before I was 11. I could talk about a lineage of Jewish anxiety that, at the very least, did not set me up for success, or the challenges that came along with growing up as a twin, my worth inherently made up in the negative space of another. But telling that story alone would imply a simple cause-and-effect relationship between what happened to me and what I later became. And, while I certainly believe that our past shapes the stories we tell ourselves about who we are and what we are worth, I also know that stories don’t exist without endings. And we get to write them.

I was 15 years old when my doctor told me I was dying from my anorexia. I stood five foot five and weighed less than my nine-year-old brother. My liver was failing, and my heart rate was so low that standing up too fast would cause me to faint. And yet the rules that circulated my brain, masquerading as my own thoughts, were relentless. Over time, hunger became an addiction far greater than my ability to maintain the weight of a child, its painful persistence a plot point I would come to rely on. Growing up, I feared that I would always be simultaneously far too much and not nearly enough for anyone. It was with my gradual disappearance that I hoped to prove to myself that it was possible to subsist on nothing at all.

I suppose I won, in that sense anyway. I managed to continue on with this charade far past the date I was told I would expire, another chronic case cycling in and out of treatment centers when it was determined that I was in need of around-the-clock supervision. I would allow myself to touch the very edge of self-destruction before turning myself in, only to begin the cycle all over again upon my release. But after a decade of systematically wasting away, the starving and purging and pills, the needles and threats of feeding tubes and medical scares, I found myself staring at that blank piece of paper at the end of a story—my story.

Perhaps in the freedom that comes with realizing you have truly nothing left to lose, I understood that I had a decision to make. The letting go was hard, but it was also easy. I was living out a story that had been designed for my protection but was now killing my chances at ever seeing a life I so desperately craved. So I chose to leave it. 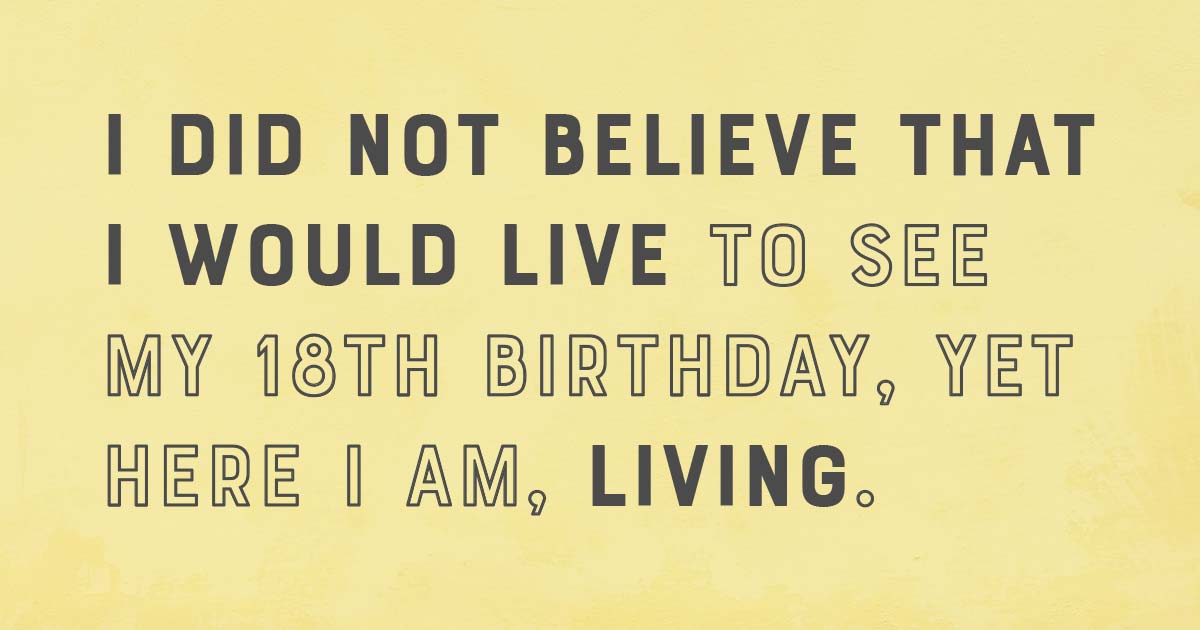 Just as I coveted that sense of control that drove me to sickness, I craved a perfect path to becoming well. I wanted to dispose of the person that needed so much, the hunger that drove me to my disappearing act in the first place. But life, I have learned, does not work like that. Along my journey of recovery, I have not become a noticeably less intense person, nor have I lost the desire to fill the emptiness my sickness had so masterfully disguised. Instead, I’ve started to acknowledge that perhaps my brokenness is not a flaw that needs fixing at all, but rather the cracks make room for growth that is only possible through overcoming.

In sickness, my words meant nothing—a sort of ironic consequence of trying so desperately to be heard. I was not trusted to eat on my own, sharp objects were hidden, and although I had proof of how much I was loved and cared for through the incessant surveillance of loved ones, I was trapped in a world that no one could relate to—and I felt incredibly alone.

Today, I share my story of survival. I did not believe that I would live to see my 18th birthday, yet here I am, living.

There’s an old Cherokee proverb that was shared with me at the beginning of what I hope will be my very last treatment stay: A grandfather says to his grandson, “A fight is going on inside me. It is a terrible fight and it is between two wolves. One is evil—he is anger, envy, sorrow, regret, greed, arrogance, self-pity, guilt, resentment, inferiority, lies, false pride, superiority, and ego.” He continued, “The other is good—he is joy, peace, love, hope, serenity, humility, kindness, benevolence, empathy, generosity, truth, compassion, and faith. The same fight is going on inside you—and inside every other person, too.”

The grandson thought about it for a minute and then asked his grandfather: “Which wolf will win?”

The grandfather simply replied, “The one you feed.”