This piece was originally published here. Please note that it discusses and addresses the topic of suicide and has the potential to be triggering. We ask that you use your discretion.

Before 2017, when I began regularly volunteering as an advocate in the local mental health community, I referred to my suicide attempt as weak. That was until a co-volunteer encouraged me to do otherwise. She told me, “Other people have died from less.” This person was an experienced facilitator of mental health services in the community. So, I valued her experience as much as I respected her opinion for the empowerment. By shedding light on why I viewed my attempt as weak will allow me to reveal more about surviving suicide than is typically discussed.

In the years before my attempt, I recognized how fragile life could be. During my senior year in high school, I lost a former classmate in a tragic car accident. I prayed and prayed with every fiber of my being that she would recover. She fought hard but unfortunately succumbed to her injuries. A few years earlier, during 1997, I lost a fellow 9th-grade classmate to suicide. The next day, when everyone found out, the hallways filled with so much tearful sorrow it was unlike anything I had ever experienced. I remember asking a teacher if it had been me would everyone be as distraught as they were about him.

By the time I graduated, I viewed the concept of suicide as a one-way trip. You make your choice, commit the act, and that was it. No do-overs. No second chances. It never occurred to me an attempt was survivable nor why my classmate wanted to end his life. While attending college the following year, my own mental health began to decline. “If I cannot decide whether or not to live my life, then no one can make that decision for me.” I felt powerless to stop losing my will to live despite being surrounded by dear friends who cared about me very much. I was also deeply conflicted.

I longed to settle down, eventually to marry and perhaps have a family of my own. I had some aspirations for success, financial independence, maybe some sights to see. All I wanted was to have my place in life with a genuine sense of belonging and happiness. Instead, women never seemed interested. Some even retreated from me on dance floors as if I had a dreaded plague. I was also unable to choose a career without feeling I had no idea what to do with my life. Eventually, by 2003, without a direction or purpose, I was willing to let go. How did not matter as much as when or why.

I tried to rationalize the decision itself. I would either be successful, and my suffering would be over, or I would have a near-death experience that would force me to learn from my mistake. Years earlier, I had heard about Dannion Brinkley’s brush with death after being struck by lightning. Beforehand, he was an uncaring person and often mean to others. Fortunate to survive the experience, Brinkley had a complete change of character and became a much more considerate person. What more could I lose? No note could begin to explain what I felt. So, I did not leave one. Who would care or understand?

There was no way to know whether specifically what I chose would cause any serious harm. Although I knew what would, I no longer cared about my safety and blindly took the chance anyway. Because of how I carried out my attempt, I felt every bit of my experience and was wide awake the entire time. Regret, anxiety, guilt, fear, anger, misery, all incredibly strong. For five to six hours straight, my mind defied the limits of sanity. I survived. No one could see it in me that I had given up. I still looked the same. However, I felt terrible guilt not just for what I did, but how poorly I did it and for still being alive. I felt like a coward.

Why? I survived when others had not, such as my fellow 9th-grade classmate. Neither did I lose consciousness or suffer serious injury compared to other attempt survivors such as Kevin Hines. Therefore, I regarded my suicide attempt as weak. Was I being hard on myself for failing to carry it out? Perhaps. I was still responsible for the decision to attempt. No life-changing near-death experience. It was nothing more than a sleepless night wracked by pain and guilt. Either way, this was now my burden to bear.

Less than a year later, in 2004, a familiar type of tragedy tested my fragile recovery. A childhood friend and next-door neighbor perished in a car accident not far from where we both lived. Unlike my former senior high classmate, he did not suffer. Where I had been selfless and more concerned with praying for her recovery, my reaction to his passing was drastically different. I wanted nothing more than to take his place despite knowing he was already gone. I was still willing to throw my life away. Eventually, I moved on. However, I refused to face my past or what I had done to myself.

It took me four more years before I finally came to terms with my suicide attempt. My paternal grandfather lived with my parents and me for one year before passing away in 2008. I had only ever seen my grandparents once or twice a year before then. One night while eating supper, my grandfather and I made childishly funny faces at each other across the table. In that moment, I made a one-of-a-kind connection with both him and my dad. I now saw undeniable value, happier memories, and positive personality traits that defined who I was as a person. I no longer felt disgraced about my past or undeserving as a human being.

I now valued myself and my life for both the bad and good.

For 14 years, I considered my attempt as weak. Regardless of the outcome, I should have been more concerned about the choice and effort to harm myself. The best course of action would have been to seek out some form of treatment, counseling, and psychiatry. The mental health co-volunteer was correct to encourage me to reconsider how I felt about my attempt. She turned this powerful negative into an empowering positive experience I could share with others. She also helped me believe I was not an unwanted recovery story.

Being alive is not something to feel ashamed of. You are meant to be here just as much as me. If you are comfortable and willing to, you can share your story as I have and should not be misjudged or feared. As sharing mine has shown, there is someone very special at the heart of the story: You. You own this moment of your life and can do so many good things with it. If by few others, I will always hold a special place in my heart for you. Why? Because I do not hide from who I am anymore. I respect the journey that led me to be who I am today. And I will never stop caring because you are why I am still here. You are my reason to be. 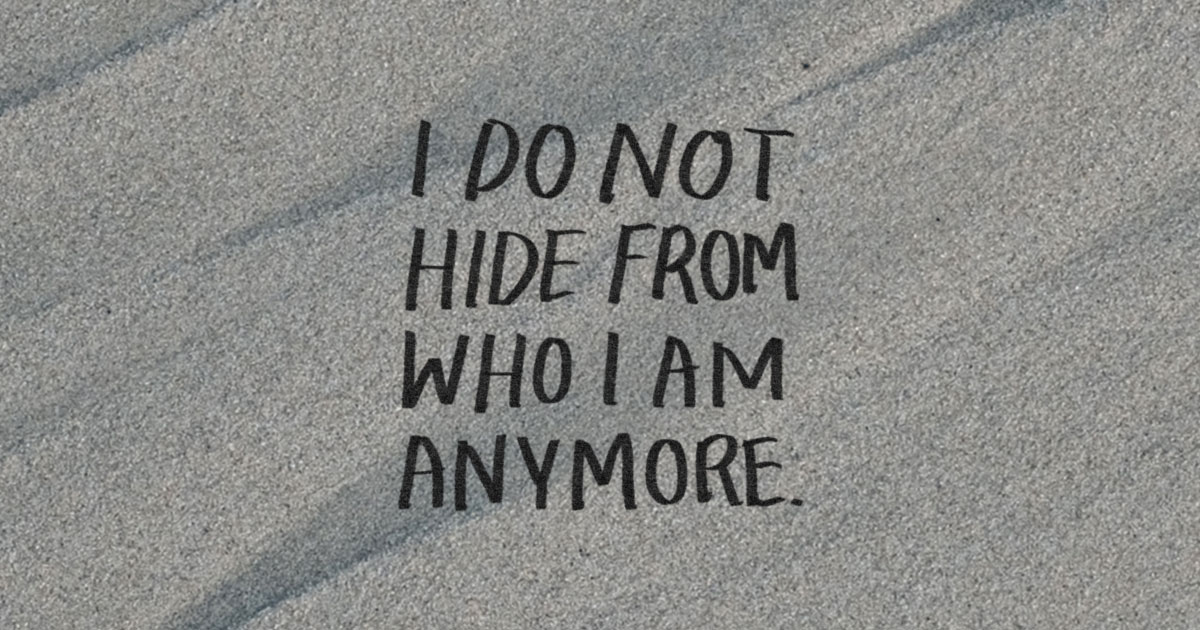