This piece discusses the topics of suicide, suicidal ideation, and sexual assault. Please use your discretion.

It was October of my freshman year of college when I lifted my foot off the curb, tears in my eyes, and walked into the path of an oncoming car. A couple of weeks prior, I had been diagnosed with depression and anxiety, but I had been hiding my symptoms since I was in the eighth grade.

I was one of the kids that was always cooed at, always told how mature I was, how great it was that I wasn’t loud and rambunctious like my classmates. I loved getting these compliments, loved feeling like an adult. It was because of this desire to be seen as mature and put together that I think I started hiding my emotions. I rarely saw adults cry, and it made me uncomfortable when they did, so I started crying in the shower to hide the sounds. I never heard adults talk about feeling bad for no reason, so I told myself to ignore the heaviness in my heart. And adults were always so busy that they never painted, or read books, or rode their bikes to see the cows down the road—so when I suddenly lost all desire to do these things that I loved, I thought it was just a part of growing up.

My junior year of high school was my first tip that maybe something was off. I had gotten into a fight with my boyfriend, and in classic rom-com fashion, I drove away in a fury as it started to rain. But what I hadn’t seen in the movies was the little voice screaming in the protagonist’s head telling them to drive into a tree because dying would show him and no one can be mad at you if you’re dead. When I made it home, I went straight to bed and cried. I was terrified. For the first time in my life, I was scared of myself.

Not long after this, I had a regular check-up with my doctor. I gingerly mentioned how nothing felt exciting anymore, and the world seemed gray. My doctor told me I was describing something called depression. I recoiled. This wasn’t something I was taught to talk about, and when my doctor asked if I wanted to get help, I said no, and that it wasn’t that bad. I never mentioned it again.

Fast forward a year, and I’m on the verge of graduating high school. It was surreal. I was about to go from my small-farming community to the largest university in the state without any of my friends. I couldn’t wrap my brain around it. Sure, I had committed to a college, and I had talked excitedly about pursuing biology, but I never thought it would actually happen. I had this scratched record in my brain telling me that if I wasn’t 100% certain of the purpose for my life, then I simply wasn’t meant to live that long. My intrusive thoughts told me not to plan ahead because at any moment disaster could strike.

But that summer, I began to plan. I had a mile-long packing list (I’m a sucker for a good checklist) and there was shopping to do. When family would ask if I was excited about college, I gave them all the same answer: “I’m a little nervous, but it’ll be fine.” That was it. Hardly any real excitement, but a vastly understated feeling of anxiety. This feeling only grew as move-in day edged closer and closer.

When I finally got to college and moved into my dorm, it felt like a death sentence. I spent an hour sobbing and saying goodbye to my parents, and the moment the door closed behind them, I had a panic attack. And then another and another. To be honest, the first two weeks of school felt like one long panic attack with the occasional pause to shower. I was always exhausted, my body heavy. When I managed to sleep, I was plagued by nightmares and sleep paralysis. I’m not sure when I stopped eating, but it couldn’t have been long after. I felt guilty spending money on food when I knew I would just throw it up later due to anxiety.

I’m a goofy person. I love to laugh, and when you get me going I have this horrible snort that I love. But I hadn’t laughed in a long while and smiles felt forced. I wasn’t myself—that much I knew. So I called the counseling center on campus and told them that everything was just wrong wrong wrong.

I remember the man on the other side of the call asking the intake questions. I remember the army green jacket I was wearing to wipe away my snot. I remember how I collapsed in on myself when he asked if I had ever been suicidal or made any attempts to take my life. I remember the resulting panic attack, and the way my voice broke when I said I didn’t want to die. I remember his voice telling me I was going to be okay.

The weeks that followed, however, remain a blur, as if I’m trying to read a road sign through heavy fog. I started therapy right away, and for the first time in years, I said how I was feeling. I spoke the truth. And it was the scariest thing I have ever done, to sit there and tell a stranger that ‘sometimes, I wish I was the victim of an accident so that I’d have a reason to feel the way I did.’ But my therapist validated me and all that I was going through. She didn’t think that I was crazy or a failure or that I needed to suck it up. She wanted to help me heal when I didn’t even know I was wounded.

But the thing about therapy is you don’t see changes right away. I had asked for help, but I wasn’t feeling better. It was October of my freshman year, only a couple of weeks after starting therapy, that I lifted my foot off the curb and into the path of an oncoming car. There was a screech and a scream and a honk, and my next memory is of me sitting in the courtyard of my building sobbing and trying to call someone who would understand, but I had no one. There was, however, one thing I was suddenly sure of, more than anything else in the world: I didn’t want to die, I just wanted the pain to stop. I called my therapist and told her I was ready to take the next step.

She sent me to a psychiatrist and I must have asked her a thousand questions about antidepressants. I was scared they would change me. And then, it hit me: that was the point. They would improve my mood and help me find who I used to be before the fog rolled in. The side effects wreaked havoc for two weeks. I had to get extensions on every assignment because my hands were so shaky that I couldn’t hold a pencil. My mom came to stay with me for a week and very nearly withdrew me from school. But slowly, I started to feel better. It was subtle. Less crying. A more genuine smile. I started making friends and going to socials. I even went to a formal, alone, and danced alone, and I was so genuinely happy. I realized this was the life I wanted and that I’d do anything to hold onto it.

A week after the formal, I was sexually assaulted. Once again, my world shattered, and I felt unsafe in my own body.

The recovery time from this violation was somehow short and easy. As horrific as the experience was, I used it to fuel my healing. I was determined to take control of my life, to learn how to love myself, and to unlearn all of the unhealthy coping mechanisms I had been surviving on since the eighth grade. I decided to stop surviving and finally start living, and that I needed to help other people live too. I got involved with mental health advocacy on my campus, began mentoring incoming freshmen on how to cope with the transition, starred in student films about depression, and became a confidante and a friend. I even began working at a nonprofit that focuses on supporting sexual assault survivors and sharing my story.

I was in therapy for fifteen weeks, called the crisis line six times, and made one attempt to stop the pain. But these numbers are not the ones that define my experience. I am defined by the 883 days since first calling the counseling center that I have woken up and made the choice to heal and to help others heal. I am defined by how I choose to live the life I almost lost. 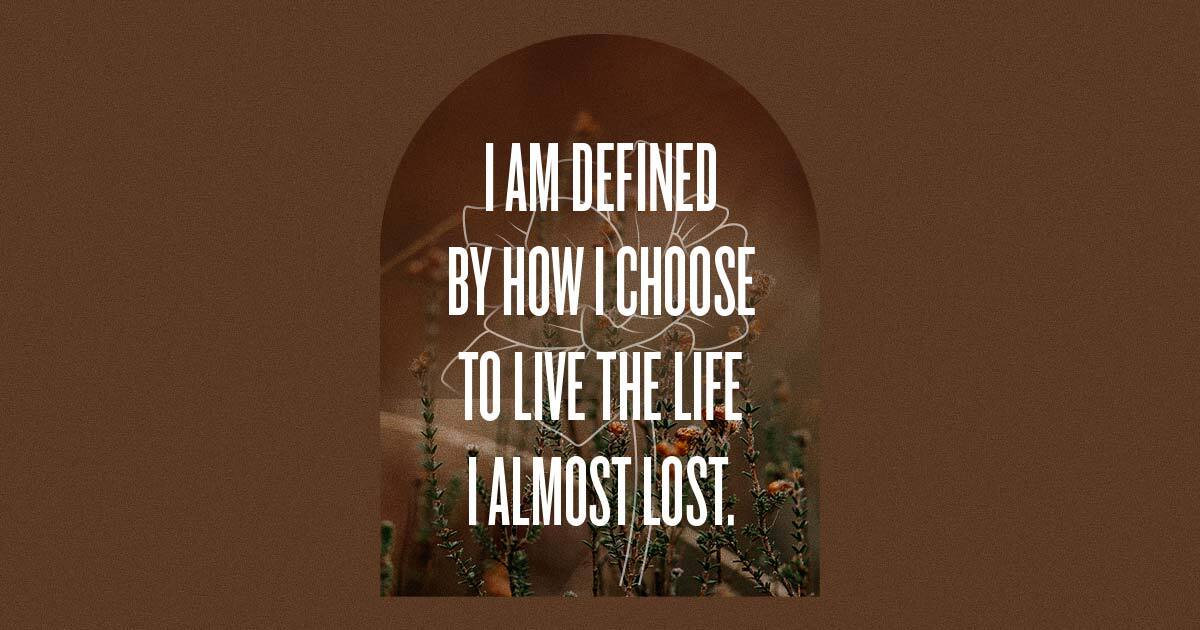