Before I came out, I felt like I couldn’t take a full breath. I was constantly on high alert. As if I was carrying around an explosive device that could go off at any moment. And if people somehow found out my dark secret my life would be over. My world would implode in a way I could not survive. I would lose everything and everyone that I loved.

It was a terrifying way to live. And an awful way to feel about yourself. I wasn’t worried people would find a body I had buried. Or money I had embezzled. The only crime I had committed was not being who everyone expected me to be. And to feel as though that’s a punishable offense is horrible. My chest was always tight, my shoulders hunched up around my ears. Every good thing that happened was tainted by the knowledge that these people did not know who I really was.

This experience was made trickier as I have Borderline Personality Disorder. A few characteristics include intense fear of abandonment, extreme mood swings, and suicidal ideation. All of which were exacerbated by harboring this secret.

I haven’t always known I am non-binary. For the longest time, I just thought there was something inside of me that was broken. I did not have the language to describe it, so I eventually resigned myself to the fact it would always be there. And I could live with that.

When I ultimately found the language—and more importantly, examples of people who identify in the same way—I was initially filled with such joy and excitement. To finally be able to put a name to those feelings. To read about other people and discover I am in fact not broken. What a relief! A wonderful result of BPD is that although I feel the lows deeply and painfully, I equally feel the highs wholly and intensely.

Until I fully contemplated what it meant…

That I—a person living in a rural Scottish fishing town—am transgender. That I was surrounded by traditional people who have little exposure to queer culture and identities. At that time, although I had found relief in finding out who I was, the idea of sharing that with the people I love was terrifying. It would mean the end of life as I knew it. The end of everything.

When the paramedic, my parents, and the crisis counselor asked me why I had tried to kill myself again I could offer them no answer. I could not possibly tell them the truth. I just lay there listless and defeated.

Three weeks later one of the first friends I had confided my identity in—following her question of why I had ended up in hospital—introduced me to a local minister. As an outspoken atheist, I could not understand this decision. I just rolled my eyes and humored her.

This is not a ‘Christ healed me’ story. Instead, this is the story of two queer people who connected that day. He told me about his past. About getting kicked out of his church and his home when he came out. About the friends he lost. He put experiences and feelings into words that I had been enduring for years. We sat there for hours getting to know each other and reveling in all that we shared.

In the months that followed, he and his husband gave me a safe haven. Somewhere I got to actually be myself. They called me by name, they used my pronouns—and it was incredible.

I then came out to my parents, which at first did not go very well. They struggled to understand and to grieve the loss of the daughter they thought they had. This knocked my emotions into a downward spiral again, but the redeeming grace was that safe space. I spent the majority of my days there, working through the mess of becoming.

I then moved into the spare room of that safe space. Which greatly aided my mental health, and allowed my relationship with my parents to start to heal. Then, in a day of courage and readiness, I came out to my community—the community I was terrified to lose. To my shock and surprise, I was accepted with open arms. The outpouring of love I received from all corners still brings tears to my eyes months later.

I now get to live out and proud as myself. I am known. It is a magical and euphoric experience. One I would never have lived through if I had died that day mere months ago. I am in no way totally sorted. I am in therapy, still working to manage my BPD. But I can take a full, deep breath. My chest and lungs no longer weighted by confusion, fear, or loneliness. I am happy to still be alive, even when things are challenging. Because I am me. A gift I am grateful I get to experience. A gift worth staying alive for. 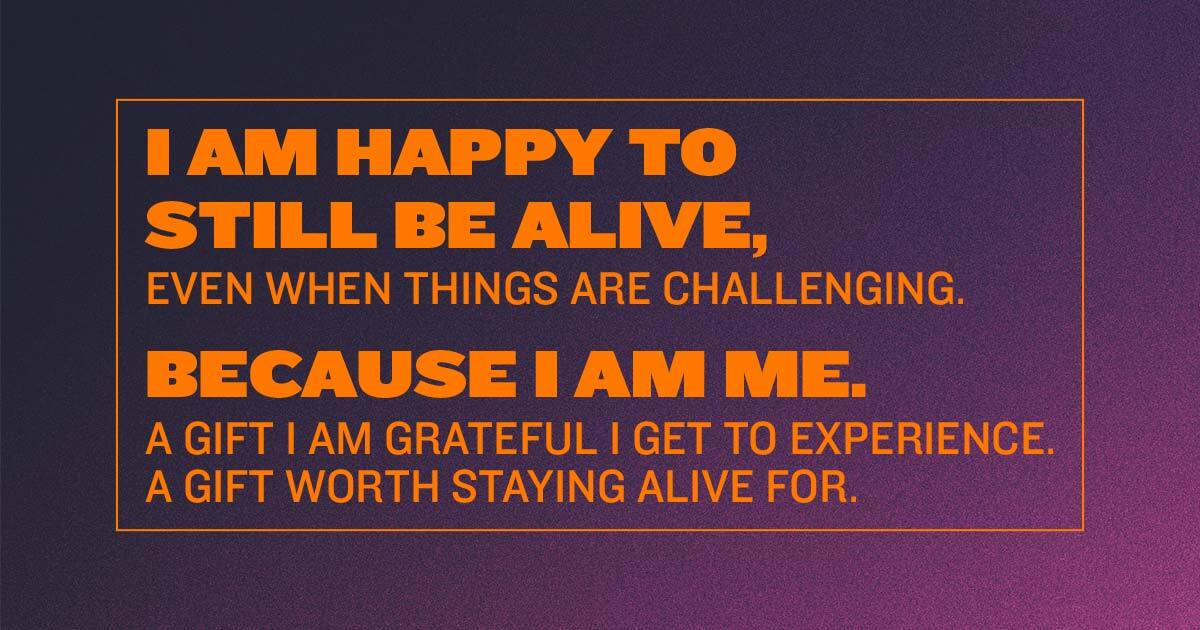 People need other people. You are not weak for wanting or needing support. If you’re seeking professional help, we encourage you to use TWLOHA’s FIND HELP Tool. If you reside outside of the US, please browse our growing International Resources database. You can also text TWLOHA to 741741 to be connected for free, 24/7 to a trained Crisis Text Line counselor. If it’s encouragement or a listening ear that you need, email our team at info@twloha.com.

Beyond the Rainbow: Exploring Queerness and Mental Health

Seeing a rainbow flag on the front desk of my therapy practice felt like a weight had been lifted.

It’s OK if you don’t know who you are from this moment to the next.