When you’re in the midst of a storm, nobody wonders what caused it. There’s only one thing on their minds: How can we help? There is no right or wrong answer. It varies depending on every individual’s personal needs. However, when the storm is inside of you, their reactions aren’t so clear cut.

Why do you do this?

Why can’t you accept the help that you’ve been given and stop hurting yourself?

Why isn’t anything we do enough?

I feel guilty, as if I’ve created it. The emotional undercurrent is too strong to ignore. It pulls me in and drags me away.

There are winds picking up speed. Dinner-time conversations about how you can’t change your DNA. You will always be XYZ to me. It’s a mental illness.

I am 14 years old. I choose a new name and am met with refusals. Silence.

I will not protest, even though the storms that are raging inside me are made worse by this reaction. It will take years to revisit, which is my fault. I’m afraid. I have two coming out stories. One ended in tears and prayer and the other would never be acknowledged, not even when I bring it up at a bar 12 years later.

A moment of courage and dashed hopes. The conversation continues as if I haven’t said anything at all. I shut down. I don’t know how to put on a brave face.

When I have only myself to consider, it’s OK. I can be a man who is mistaken for a woman and not the other way around. I start small and give myself permission to accept what I’ve always known, what I tried saying all those years ago.

When I start factoring in everybody else, it’s an illness. It’s a burden my family doesn’t deserve to carry.

It’s the silence as people lock their doors, board their windows, and I’m forced to push this so deep inside myself that it may never come to light again.

I was a child who didn’t know any better. I was confused, but then I grew up and everything was all right. Everything except the depression, the urge to hurt myself, the tumultuous thoughts and what-ifs.

The body that has never failed me. It’s done everything it’s supposed to do but still feels as if there’s something amiss.

It’s replacing the need to hurt myself with alcohol and never even realizing it. The luxury of being able to hide my pronouns on a website. Anonymous surveys where I can be myself. The thrill of it, the fear, the guilt, the persistent longing. I was told I couldn’t be this person. No, I was told that I wasn’t.

Though the storms have mostly passed, I can see where they once lingered. I can see scars. I can count four bottles of alcohol one month into a new year and the sudden urge to do better. The incessant need to tell somebody. Anybody. But the fear that they wouldn’t understand. I have more to lose now.

Nothing is different. Nobody wants to ask how they can help when they believe if I just did something differently, thought the way they did, I would be all right. That as I grew and my body changed and I did everything society expects from a woman that those things would just fall away.

Nor does it stop the knowledge, the dread that comes with it, the desire to hurt myself in order to not be seen or heard. I could shout these words from a rooftop, but it would all come crashing down around me because my emotions have always been too much. Because I’ve been taught that how I feel is wrong.

It’s an illness. Something I need to manage, not dare to embrace.

A storm will strike again. The wind, the rain, the heaviness. The guilt that everything I have isn’t enough. The name that belongs to me, that I’m familiar with and yet have nothing in common with.

I can be a man. I am a man, even if nobody else sees it. I see so many people coming forth and their family and friends or internet strangers helping them change the narrative.

They’re my beacon of light. Mixed in with all the pain and shame, there is hope. Love. Acceptance.

One day the storms won’t seem so threatening. I won’t count on what I have to lose, but everything I have to gain.

Slowly. Surely. I will find the people who have endured similar storms and who are willing to help and I’ll find my voice.

I’ll be all right. 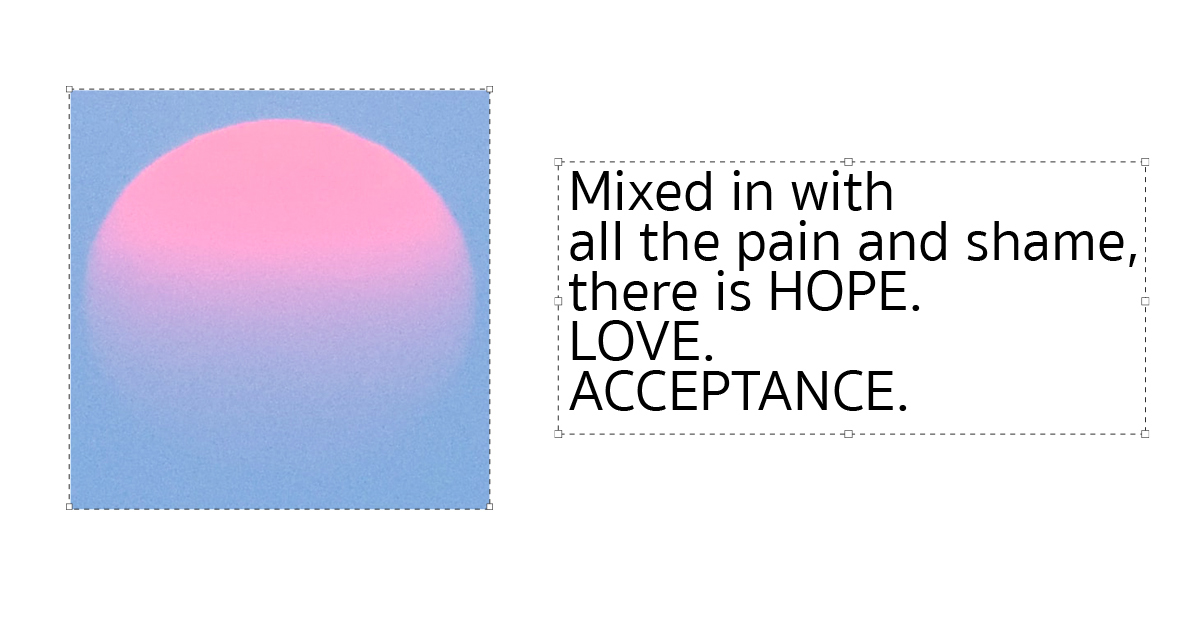 In honor of June being Pride Month, we’re sharing the voices and stories of people from the LGBTQ+ community. We know that the stigma and discrimination this community faces makes them almost three times more likely than others to experience a mental health condition. And, LGBTQ+ youth are four times more likely to attempt suicide, experience suicidal thoughts or engage in self-harm. We believe the message that “hope is real and help is real” is for everyone. We want to be a part of making sure those who need life-saving support, regardless of sexuality or gender identity, have access to resources.

That’s why we’re partnering with two outstanding organizations that are working to connect members of the LGBTQ+ community to help in their moments of need. TWLOHA is honored to supply grants to The Trevor Project, a leading national organization providing crisis intervention and suicide prevention services to lesbian, gay, bisexual, transgender, queer & questioning (LGBTQ) young people under 25, and the Trans Lifeline’s Hotline, a peer support service run by trans people, for trans and questioning callers.