Maybe you know the feeling of walking down the hallway or the street and seeing someone you know only fairly well out of the corner of your eye—someone stuck in that odd state of “acquaintance.” Do I really have to say hello? you nearly grimace. Ultimately, you do or you don’t, and then maybe you take a shaky breath, and finally, you move on—until the next one.

I’ve been in that sort of a season lately. My logic has been a little bit distorted by anxiety, and it’s made it difficult to put in perspective what people feel about me—what I feel about myself, even. I don’t know if I ought to take those risks of trying to meet people’s eyes and smiling, considering that the image I plant inside their heads might be less than desired. And besides, I don’t know how long my eyes should stay fixed on theirs and it seems like my hands have no real place to go and my lips are either too big or too small for this whole smiling-without-teeth business. It’s so awkward—I’m so awkward!

Sometimes, I wish I were invisible, just to avoid the whole charade.

Overall, though, I think my troubles boil down to this thought: People have better things to spend their time on than me. Upon reconnecting with someone I hadn’t seen in a while, the only thing that crossed my mind was whether she was as excited to see me as I was to see her—or if, in fact, I was wasting her lunch hour with my trivial questions, occasional stutters, and awkward silences. Surely, her time was more valuable than mine. I was inferior, superfluous—and guilty. Guilty for being there, guilty for stealing her attention, guilty for even existing, a little bit.

And it didn’t seem irrational then. Anxiety has this really funny way of distorting not only what you see, but how you see, and I was seeing myself only as an extra in everyone else’s lives: never worthy enough to meet the stars, the key players, the ones I admire from afar. But as soon as I became conscious of that, I realized I was wrong. Who am I to decide that other people don’t need me? Am I not just as worthy of comfort and love? They are only human, the same as you and I—and maybe the only thing left in their lives is to improve someone else’s, to know, too, that they are on someone’s mind and in someone’s heart.

You don’t have to feel guilty for being around, for taking someone’s time, for being alive. You are not a burden. After all, time with those you love is always time well spent, and by golly, you are loved. You are loved by people you don’t even realize—people who are walking down the street, hoping that you’ll stop for a minute to say hello, wondering if they are allowed to take a moment of your precious time. And if you do the brave thing and try to meet their eyes, finding they don’t look back at you, maybe it’s not that they don’t like you, or that they don’t remember—maybe they’re worried too, wondering if they’re welcome in your mind, and avoiding the possibility of that rejection themselves.

We are all confused and a little lost, and all a bit worried about that harmless little four-letter word. But before you say otherwise, you are not the exception to the rule of love. What we feel is only the guilt talking—the guilt that comes with the awkwardness of being human: the constant interruptions and the poorly-timed jokes and the we-said-goodbye-but-now-we’re-walking-in-the-same-direction mishaps. Well, now I say: bring it on. It’s our imperfections that make us likable protagonists in our own stories anyway. So, let’s be human and let’s love, and let’s find a way to love being human together. 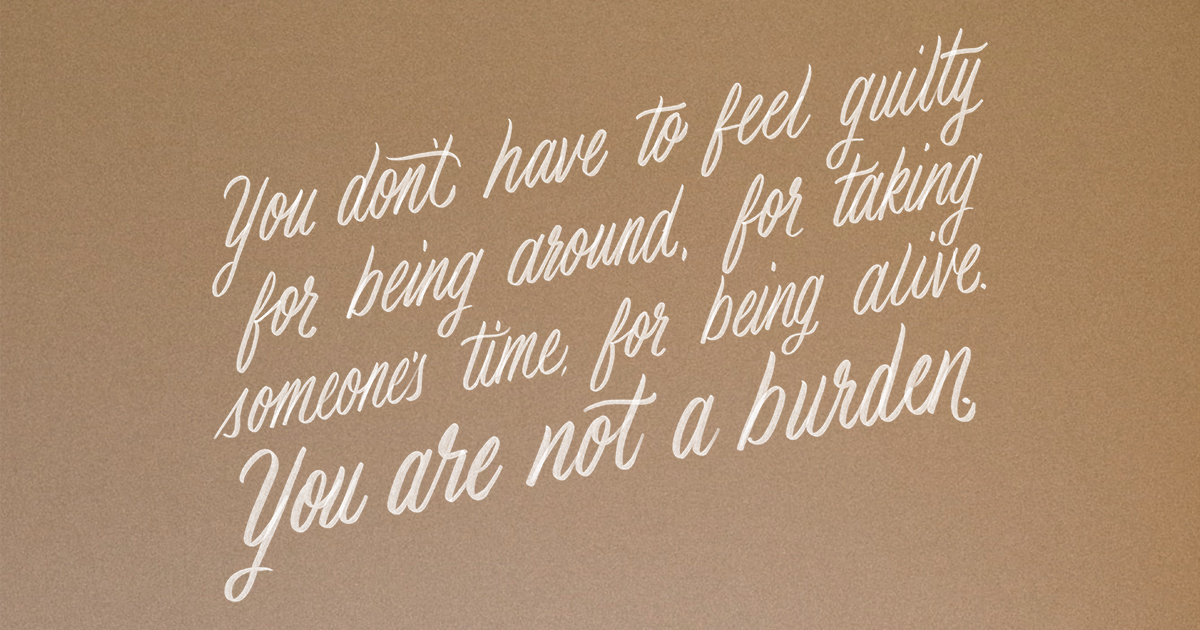 Mystic: Not Perfect But Better

The depression I suffered my whole life has since become a symptom of a very manageable problem, not an innate part of me.

There’s No “Right Way” to Heal

Every day people are prescribed medications to help combat infections, diseases, and physical ailments. And yet, there remains a stubborn stigma attached to medication intended to treat mental illnesses.

It’s All Still Me

Presenting these stories separately creates three unique images: the one healed, the one fighting back, and the one struggling to survive.