The topic of suicide and detailed attempts of suicide are discussed throughout this piece. Please use your discretion.

This post has also been edited. You can read the piece as it was originally published here.

I came home in the early hours of Saturday morning. I was as quiet as I could be, not wanting to wake my dad with the sound of my footsteps or the liquor on my breath. Part of me wanted to wake him—to collapse before him and share all the things I’d heard, like a child who chooses to speak up when they know a friend is being hurt.

Have you ever seen a man die? What about a man dying inside?

My friend locked eyes with me. Usually, his gaze flits about, anxiously coming up with a funny joke to counter the silence. Now was different. Unyielding, his eyes met mine and tears formed freely in the sockets.

“When I was 9, I walked in to find my dad with a gun in his mouth,” he said, “and for some reason, my 9-year-old self prevented him from pulling the trigger. We never talked about it again. It was like it never happened.”

His eyes were now engulfed in tears, as were mine.

It may have been several minutes before I answered. I was walking through my memories and trying not to envision his. I’ve been to his house. I’ve met his family, his dad. They’re kind and quiet. They mind and tend to themselves.

My resolve was shaken. Ten years of sharing life and laughter with him, and I had no idea. I’d always assumed that he was untouched. He was one to bring others out of darkness. I knew such because he always offered a reprieve from my own ups and downs.

Before this moment, he was the safe and controlled space that enveloped me whenever we were together. Now, our souls were spiraling at an unbearable speed.

My heart broke to bits knowing that he was not untouched after all. I realized so very quickly that none of us are. We are all desperately broken. Together, but ever alone.

I took his hand in mine and tearfully pleaded that he not use his dad’s choice to inform his own, that he speak with him about the experience that has impacted him for the last 20 years of his life.

He dismissed it. I countered. He countered. I felt the bondage. I felt it so thick around him. I was listening to both his admissions and to what his heart was saying in the silence between them. I fought the urge to rip myself from my seat and collapse into a hug as I mourned these two lives, two who walk the earth now as dry bones, rattling beside each other—together, but ever alone.

Our hands held firm, we were steady in the unsteadiness of the moment. I asked that he promise to never end his own life.

“Is there anything at all that would keep you from doing it?”

His mom and his dog, he answered.

He could only promise that he would tell me “when” he considered suicide. He was giving me the best he had to give, but my heart was grieving for the future. Maybe I wouldn’t pick up the phone, or a minute too late perhaps. Maybe the distance would keep him from calling at all. Should I stay? Move home to be near him?

I would hold out his broken pieces if it ever came and say to others, “I knew. I knew he was hurting and it wasn’t enough. I didn’t do enough.”

I asked to see him again the next night. It was the only way I could stomach walking away.

We laughed over dinner as if nothing was amiss, talking about alien probes, the paint colors of the restaurant resembling a no. 2 pencil, and the food we were eating. Finally, I asked if his cheerfulness was somehow deflecting, if he was compensating for the heaviness of the night before. Avoidance, you know.

Following dinner, we went to his office with a bottle of wine and settled in for another long night—we weren’t finished.

As we talked, we leaned in and out and beat around all kinds of topics before I asked if I could read him the notes I’d filled my phone with over last night’s conversation. I’d written as much as I could in as many details as I could remember because I couldn’t sleep after walking away from him.

When I read him the transcript, we both wept. I was trying to look up at him from time to time as I spoke, but I could only make out his general shape through the tears.

“We can fight hard for others, but we cannot fight their battles. We are enough. They are enough. But what we do for them, sometimes, is not enough to save them.

If we do not stand up and fight for them, they won’t find any strength at all to fight these gruesome battles. In this war against themselves, we are their weapons. And we, loving them well and without fear, are loaded and ready to disarm this evil. They cannot bring capable weapons to the fight without our giving ourselves up for them, pleading for and with them, loving them…

We all meet the end, but it does not have to be by the edge. How can we believe that this wildly messy experience is not the end or the edge?

We intercede: in these hills and valleys, call out to dry bones, ‘come alive.’ We are an army surrounding you, behind you, in you, for you.

Moments of ‘too hard,’ ‘too much,’ ‘too great,’ will not be removed from our path. Time and time again, the brokenness of this world will cause our feet to slip. It will not go away, but if you don’t go away—I will not go away.

I will not jump into the void, I said to him. I will not, and I will be damned if you jump, truly.

I love you. You are my heart and always have been. I am and always will be FOR you.

You are not alone.

You are not alone.

Please, do not believe it for a second,” I finished.

I knew I would read it all to him. I’d been preparing for it all day. Still, it was difficult.

We stared at one another, blotting our eyes with our shirts. And I could feel the intensity increase as his lips repeated a pattern of moving to speak and stopping.

He quit resisting and began to tell me the story of his attempted suicide. Could I break any more than this?

He’d gotten a doctors note, stayed home from school, and tried to hang himself in the shed behind his house.

As if reading my mind, he asked, “Do you want to know how I got up there?”

It was his dog who stood on all fours beneath him, obediently. He’d been used as a stool to reach the noose.

By this point, I’d moved from my chair across his desk to sit at his feet, holding his hands as he buried his face in them. Something in me knew this part of the story may have been his own subconscious creating a barrier for him, because perhaps in his heart of hearts, he didn’t truly want to die.

“He just… took it,” my friend wept. “But I couldn’t do it. I could feel him nudging me. He’s such a good dog. He has never looked at me any differently.”

He whispered, “he is such a good dog,” over and over.

By that, he meant “friend.” This dog was the only friend who knew and carried this devastating truth, who’d shown love and care for him in his darkest moment—and then forgot about that darkness as it was happening and after the moment was released. The dog saved his life. In Greek, the meaning of his dog’s name is “the one who heals.”

As we were chatting yesterday, I shared this and he asked if I thought that he had been named that as a puppy because someone knew that he would be used to heal.

“Cosmically, I do. Very much so,” I responded. This statement meant something to both of us since he’d been aware of how my faith had crumbled over the years.

“I think I might be coming around too,” he said.

There’s an Easter phrase, “It’s Friday, but Sunday’s coming.” It alludes to Jesus’ death on the cross…the darkest Friday in spiritual literature, a day when no one knew that resurrection would come, that healing would come, that Jesus would come. On the other side of the resurrection, believers can see how riddled Jesus’ followers were in the days before Sunday, broken and confused.

When we met on Friday, I did not know that my friend and I would walk through the heart of death together over the next two days. We didn’t know as we navigated through it that we would both wake up Sunday emerging from tombs, freed and alive. Resurrected in a way.

Sunday came. Monday came. It is Tuesday, and we are still alive. We will take each day, one at a time, and hold onto each moment with these promises in mind.

If you find yourself where my friend has been, where I have been, he and I share this story for you. We hope that by opening up, you will find the courage to; that something in this story gives you the strength to approach your friends or be honest with yourself.

You are truly loved. We are an army around you, behind you, in you, and for you.

With time and space, things change.

With love and mercy, lives do. 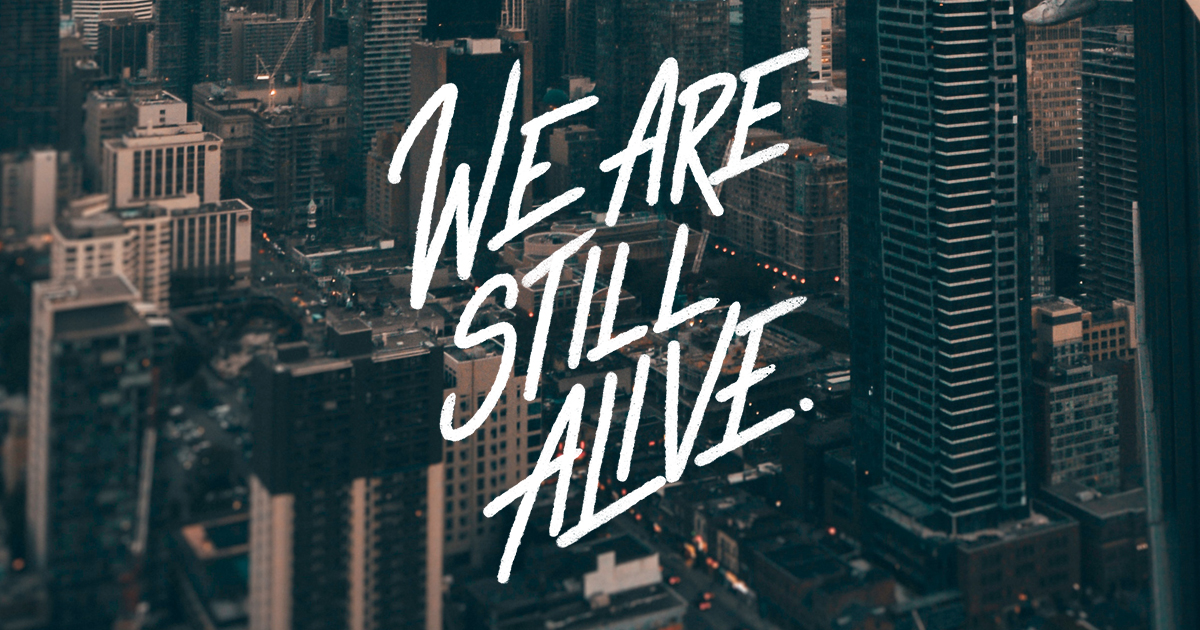