A couple of years ago, I started having the most intense panic attacks. Sometimes I couldn’t do anything but lay still on the hardwood floor. Paralyzed by what I wanted to be and the reality of who I was, I plotted how I might take my life.

Turns out, I was really anxious.

Turns out, I was in a mixed-orientation marriage that wasn’t working.

Turns out, I’m not straight.

The process of coming out wasn’t easy and there were several complicated layers involved.

First and foremost, I needed to come out to myself.

A lot of the turmoil in identifying as queer had to do with growing up in a somewhat conservative, Evangelical household. The Church told me indirectly (and sometimes very directly) that queer people were bad. So I grew up truly believing that God hated us, and if the god of the universe hated people like that, people like me, then I had to as well. And I did. I learned how to hate myself very well.

Coming out to myself meant I had to face that hatred as well as some pretty intense questions. If I accept myself as this person I’ve just found myself to be, will God hate me? Am I willing to be who I am even if God hates me?

I felt this painful ache. I wanted to run the other way and never think about it again, but I knew running only brought me to the brink of suicide.

So instead of running from it, I stared it in the eye. I dared to look back. I named it and said it out loud: “I am asexual.” And the weight from those twenty-seven years fell off of my back.

It was one thing to accept this identity on my own, but what would happen when I verbalized it to those closest to me? Would they leave?

Coming out to my friends and family also meant sharing the news about my divorce.

A few of them were happy that I was finally able to be myself, but most of them didn’t understand. What I wanted to be a kind of “courtesy call” turned into a series of very uncomfortable conversations explaining what asexuality is, that it isn’t a flaw, and that I’m just fine.

I felt as though I was the captain of a sinking ship in the midst of a storm.

One family member suggested seeing a doctor to make sure it wasn’t “something else.” I asked her if she had to see a doctor to know if she was straight. She didn’t. We didn’t talk for months.

The relief that I had in coming out to myself suddenly felt contrived and far away. The panic attacks continued as polarizing reactions from my family hit from all sides—a rollercoaster I’m still on to this day.

Once I had come out to my family, addressing the rest of the world felt like the easy part—I was actually looking forward to it.  As I do with most things, I came out through writing. I wrote a piece for the TWLOHA blog and shared it on my social media. The response was, as expected, overwhelmingly supportive.

I’d like to say that, two years later, everything is perfectly normal, but that isn’t the case. It’s an ever-changing situation and learning process. Whenever I talk with the family members I’m unsure about, I panic. The panic has lessened each time, but it’s still there.

Telling my family that I was engaged to my dream girl felt like coming out all over again. They weren’t overwhelmingly excited. They didn’t rush for the champagne. It was more like telling them I’d bought a new car. I often wonder how much different it would be had I gotten engaged to a man or had I never come out at all.

My fiancee and I experience times of uncertainty, wondering what people will think of us. What will people do if we hold hands? Can I kiss her? At the beginning of our relationship, before attending any social gathering, we’d ask each other, “Do we need to be ‘straight’ here?” And after being harassed by a group of men for holding hands at a park in a St. Louis, we now google LGBTQIA+ right before traveling to a new place.

We shouldn’t have to ask ourselves these questions, but we do. It’s the reality we live in.

For me, before I started this journey to understand and accept myself, every comment of heteronormative standards, of having children, of having sex, every dirty joke or sexist comment, made me believe there was something inherently wrong with me. It tore me apart for so long and brought me to consider suicide. Living authentically and freely was my only option if I wanted to stay alive.

So I did it. I put my worth, my livelihood, above the hurtful opinions of others.

To those of you who aren’t out, I want you to know:

You don’t owe it to anyone. You can take your time until you feel safe, and even then, you don’t have to come out at all.  You can simply live as you are.

If or when you come out—with a parade or a whisper or somewhere in between—I’ll be here, ready to love and celebrate you. 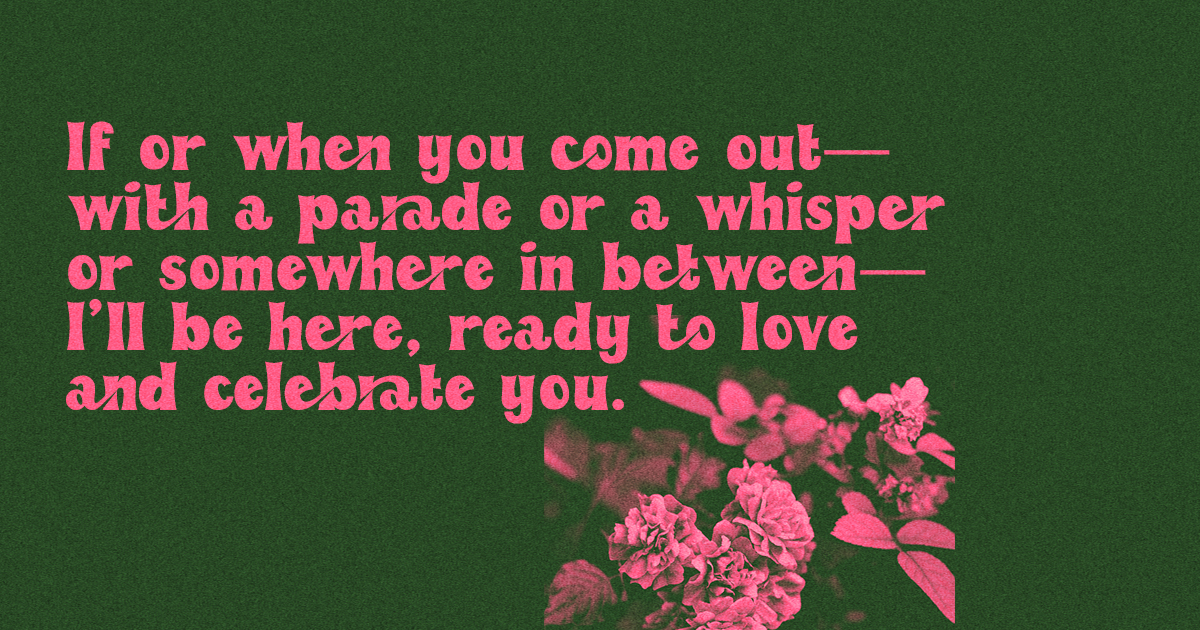