I was three years old the first time I remember feeling lost and alone. I was in pre-school and found myself thrust into a world I felt like I didn’t belong in. But at three years old, you can’t really understand that kind of pain, let alone express it. So I stayed silent. For over a year I did not speak at school. Not to the teachers. Not to the other kids. Not to anybody. They assumed it was a developmental delay, but really, I was just, taking it all in. Not wanting to open my mouth for fear I’d say the wrong thing. I felt lonely and I just wanted to disappear.  The more people tried to get me to talk, the worse it became. I was taunted. My parents pushed me every night at home—where I had no problem speaking my mind. Over and over I would say, “We’re not talkin’ about the talkin’.”

In the fourth grade, the “popular” girls all wore these Airwalk sneakers. I, on the other hand, had dopey white Keds. Trying to fit in, I begged my mom for the Airwalks. When I went to school with my new shoes, a girl said, “You finally got the shoes. Welcome to the cool kids club.” That day I was invited to sit with them at lunch, usually a dreaded time, but I finally had people to sit with—a first for me. This was my first experience actively changing something about myself just to fit in.

The years since have been a constant back and forth between retreating into my pain, or bending to fit the mold of what I thought was expected of me. I finally realized that the covering up, the shame, the hiding, it was all feeding my depression. My brain would tell me that I had nothing valuable to say, or that in order to be well received, I had to put on a mask because nobody was really interested in the human being underneath.

It’s like being stuck in a game of hide and seek, wondering why no one has found you yet—but maybe I was hiding so well that nobody could find me. I thought I yearned to be seen, but if I was afraid to even look at my own reflection in the mirror, how could I expect anyone to find me?

When my depression took a nosedive and I was in and out of treatment programs, I learned to say what I knew would get me discharged. I felt so much guilt about the devastation my illness caused my family, that I wanted to get better just for them. When I did get discharged from various programs, they were proud. Perhaps for a moment, they took a sigh of relief that the storm was coming to an end. Little did they know, I had a monsoon raging on inside.

I kept ending up back in the same position: Sad. Alone. Hopeless. Angry. I was so mad at the world for not understanding me. Everyone wanted to fix me, but the more they tried to fix me, the more broken I felt. Underneath all of those walls I had spent years building up, I was still the scared and lonely three year old on the playground, only now the pain had decades to grow and the loneliness was deafening.

My relationships, my job, everything in my life fell victim to my depression, my inability to see value in what I had to offer the world. I wanted to disappear, but that’s what I’d been doing for years and it hadn’t gotten me anywhere. The worse my depression got, the more I fell into cycles of self-hatred, worthlessness and suicidal ideations. I didn’t know what it was like to want to be alive.

After everything that didn’t work, it was time to get real. Time to peel off the layers, to raise my voice and finally get brutally honest about what I was feeling. With the removal of each layer, I felt more naked and exposed. I wanted my security blankets back. There was no way anyone was ready for the real me, I wasn’t even sure if I was ready.

But it was time to live for myself, not for what I thought the world wanted me to be. It was foreign to open myself up to the idea that the person I’d been wishing into non-existence was actually a whole, valuable person who deserved to be alive. The small candle that was flickering deep in my heart was growing and expanding into the light I had been searching for; I could finally see my way. This wasn’t the end of my road; it was just the beginning of my rising. Now, the healing could begin.

There’s nothing easy about learning your true self. It is full of discomfort, shame, pain, and guilt—all of the feelings I had spent 30 years running from. I’d throw on a smile, hoping nobody could see the tears building up behind my eyes. I never realized that if I stopped running from my pain, or took down my walls that I would find joy in living my truth. It took sitting with my pain, working through it and not around, but now my path is no longer about fitting in, or being accepted or even comfortable. It’s about leaning into the discomfort and learning to accept myself without worrying if I’m too much or not enough for some people. I may be flawed, but I am not broken. And each day I can remind myself of that, I’ll be moving closer to the beautiful life that has been patiently waiting for me. 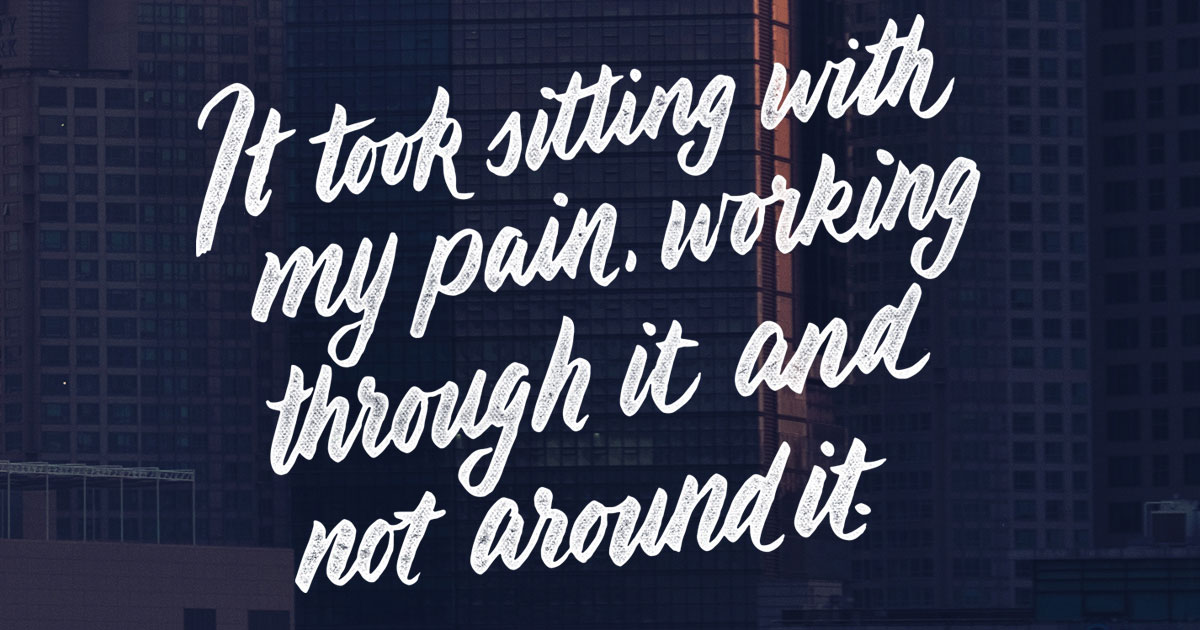 Using My Anxiety as a Superpower

My mind is racing, constantly trying to regroup, because I like to color inside the lines, but the lines are all gone.

Making Agoraphobia Part of My Past

I accept that right now agoraphobia is part of my present, but one day, it will be part of my past.