This week, I exhorted my Sailors to live out their day with courage and compassion.

I did so, knowing that not 24 hours prior, we had told them that their coworker, their brother, their friend—he had taken his own life. There were no signs. There were no indications, no opportunities for “bystander intervention.” No chances to implement the infamous “Ask-Care-Treat” method or any other clever acronyms.

Leading up to his passing, we held weekly awkward Zoom calls, teasing him for his blue flannel pajamas.

“You’re supposed to not let people know what’s under the polo.”

We point-blank told him, as well as the rest of our younger crew, that we were worried. Worried about their well-being, worried about their mental state. We told this Sailor that his life mattered. That we cared. That we, that I, had gone down dark roads ourselves, which is why we were reaching out. “Give us the opportunity to earn your trust,” my Chief asked, broaching, as always, her own vulnerabilities. Just the week prior, she had shared with this young man how she, his “superior,” had gone to counseling, had sought help. He didn’t engage; he asked for her burrito instead.

And yet I couldn’t.

What does it mean when they give it all up?

What does it mean for us?

I exhorted my team to live with compassion and courage.

Well, compassion is taking that time for the park. It’s allowing our human need to cry out—in pain, in confusion, in anger. It’s putting aside our independence to reach out to one another—for guidance, for support, for a listening ear. Compassion is allowing our weakness, our imperfection to shine through; to set aside our pride enough to admit we just can’t get through this alone. 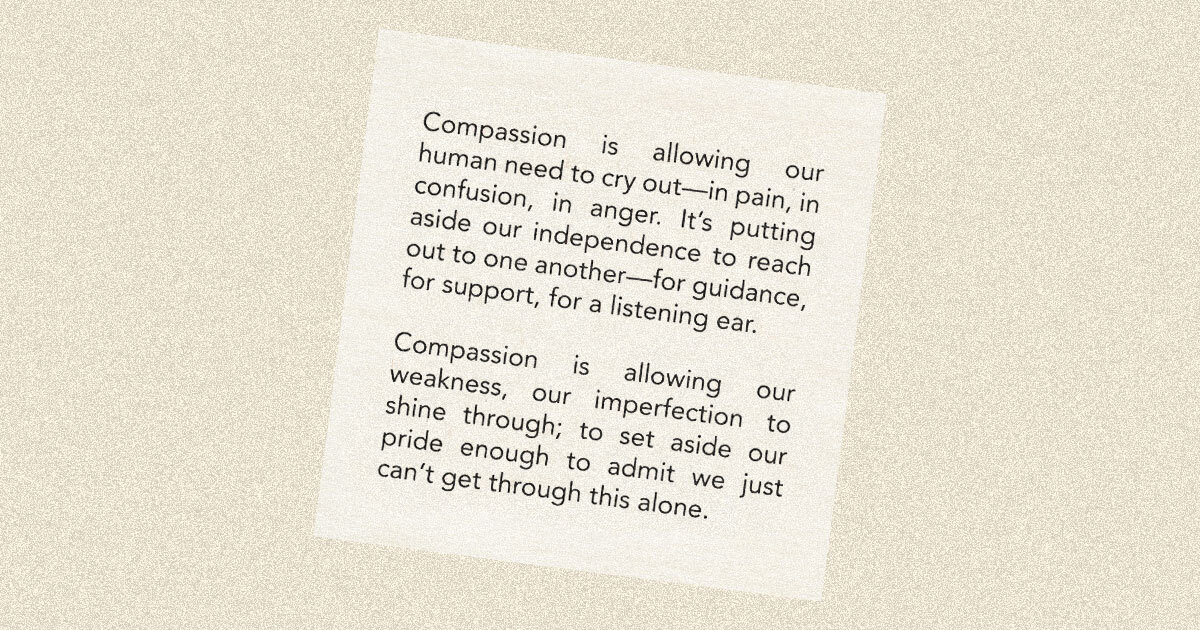 Compassion is not judging my fatigue of yesterday, a suffocating blanket of heavy that settled over me, a weight no sleep or coffee or heart-pumping music could pierce. Compassion is sitting with our grief, not wishing or willing or distracting it away. Not eating until we puke. Not drinking until we blackout. Not “doing” in a rush to escape—even, and perhaps especially, when we dress the busyness in the deceptive cloaks of “must,” “should,” and “legacy.”

Compassion is holding space for our own emotions to run their course, whatever the timeline, however they appear. Compassion is coming to believe, truly, heart-knowingly believe Leonard Cohen’s assertion that “there is a crack in everything: that’s how the light gets in.”

And then there’s courage. Where does courage fit in?

J.R.R. Tolkien’s The Fellowship of the Ring sets the stage with a grim, foreboding outlook. Mordor grows stronger; its armies grow larger. The “Eye” looms closer. The embattled crew has just barely escaped from Moria, a horrifying tomb splattered with menace and gore; they have just lost their leader, Gandalf. All the land seems broken, and the current “reality” deeply affects Merry, a younger, starry-eyed hobbit who had insisted, just insisted on joining the crew.

Now, only a few weeks later, he observes, “I have never been out of my own land before. And if I had known what the world outside was like, I don’t think I should have had the heart to leave it.”

On one level, I would argue there is courage to be found even in this statement—the emotional courage required to admit that we aren’t impervious heroes, to admit our weariness, our disillusionment. It is the response to Merry’s pain, however, on which I would place emphasis:

“The world is indeed full of peril, and in it there are many dark places; but still there is much that is fair, and though in all lands love is now mingled with grief, it grows perhaps the greater.”

Although Tolkien’s book is fundamentally a work of fantasy fiction, its author was far from naive. Serving as a lieutenant during the First World War, he faced the horror of the Western Front. He suffered through the Battle of Somme and a four-month stint in the trenches; all but one of his closest friends were killed. This was a man who knew despair. This was a man that knew pain, knew loss.

And yet he spoke of love anyway. Or, in other words: he asked Merry to hope.

And that takes courage.

How do we hold onto hope, when everything seems bleak?

In my opinion, the answer comes down to raw courage. Not every day; not on the days when the sun is shining, or friends visit, or the river flows quite serene. But in prison, in war, in hunger or debt or a worldwide pandemic. When everything that can go wrong does; when our failures loom large, the difficulties insurmountable. When the voices in our head whisper unceasingly of “not enough,” of our stupidity, our ugliness, our foolishness.

I don’t claim to know of all the factors affecting him, and I will never discount the incredible, insidious role of mental illness, of its all-consuming chains of heartbreak. I know well the feeling that my life doesn’t matter, that my death wouldn’t affect others. As one forcibly summoned to the school psychologist for just those thoughts, I empathize deeply for any in that situation.

But just as a Christian might boldly declare, “as for me and my house, we will serve the Lord,” echoing the Old Testament despite all scientific and cultural counterarguments—so, too, would I aver, again and again: “Hope is defiant.”

Hope is defiant when bills keep coming, when I fall, when I’m angry.

Hope is defiant when every single logical, factual, numbers-based law/theory/assertion tells me I am wrong.

In that moment, I asked my Sailors to live with compassion and courage. I hardly knew myself what I was asking at the time; the news was too new, too fresh. I hadn’t had time to process myself. But I trusted my instincts, and I wrote the words anyway.

After having some time, some space to think, I’m glad I did. We need compassion to allow ourselves to be fully human, but we need courage to hope.

I can only hope they listened.