When I was 16 my younger sister, who was probably 10 at the time, asked me, “Anna, why are you always sad?” I was so shocked that she had even a sliver of awareness of my emotional state, that I didn’t know how to answer her question. Well, technically I did, but I wasn’t sure if I was allowed to.

I’ve dealt with mental health problems for a long time. I’m 21 now, but the first time I remember having suicidal ideations was at 10 years old. I had a panic attack for the first time in 7th grade, in the hallway at school. Over the past 11 years, I’ve had more breakdowns and therapy sessions than I can count. But if someone were to ask me what the hardest part of living with mental illness is I would say, “Not talking about it.”

I don’t know the exact statistics, but I am sure that more likely than not, you or someone you know suffers from a mental health problem of some kind. As I’ve grown up and seen the signs of depression and anxiety in so many people around me (my friends, my parents, my teachers, even casual acquaintances), I have been bogged down by the question: if so many of us are hurting, why aren’t we talking about it? Sometimes I am still frozen by the memory of a classmate whispering the word depression as if it was a bad word.

I know we try. We have mental health awareness days and we hear speeches about the warning signs of suicide (usually after someone has just died). We post about “self-care” on Instagram and joke about seasonal depression. But when will talking about mental health stop being a bold statement, a joke, or a pointed conversation and just be… normal.

I started talking about mental illness openly, unintentionally. It just kind of slipped into my daily conversations. I would say things like “Oh shoot, I forgot to take my medication” or “I can’t go out right now, I’m having a panic attack and I need a safe space to calm down” without thinking about it—I said those things just because they were true. Very quickly I got used to getting strange looks from, well, everyone. My brief, but apparently marked language, always conjured discomfort and uncertainty (similar, I’m sure, to how I reacted when my younger sister questioned my mental health when I was 16). I watched my friends cringe when I mentioned depression or anxiety around people who didn’t know me very well. I saw my parents squirm when I brought up my latest psychiatry appointment at the dinner table.

Quite a few people have told me that they were surprised when they found out I have a mental illness. They say things like, “but you don’t look depressed.” That used to offend me, because what is a depressed person “supposed” to look like? But then I started thinking about all the people I would’ve never known were struggling with something if they hadn’t told me.  I thought about all the people who’ve told me that hearing that someone they knew was also dealing with anxiety made them feel less alone, or that they decided to give therapy a try because they heard me talking about it. 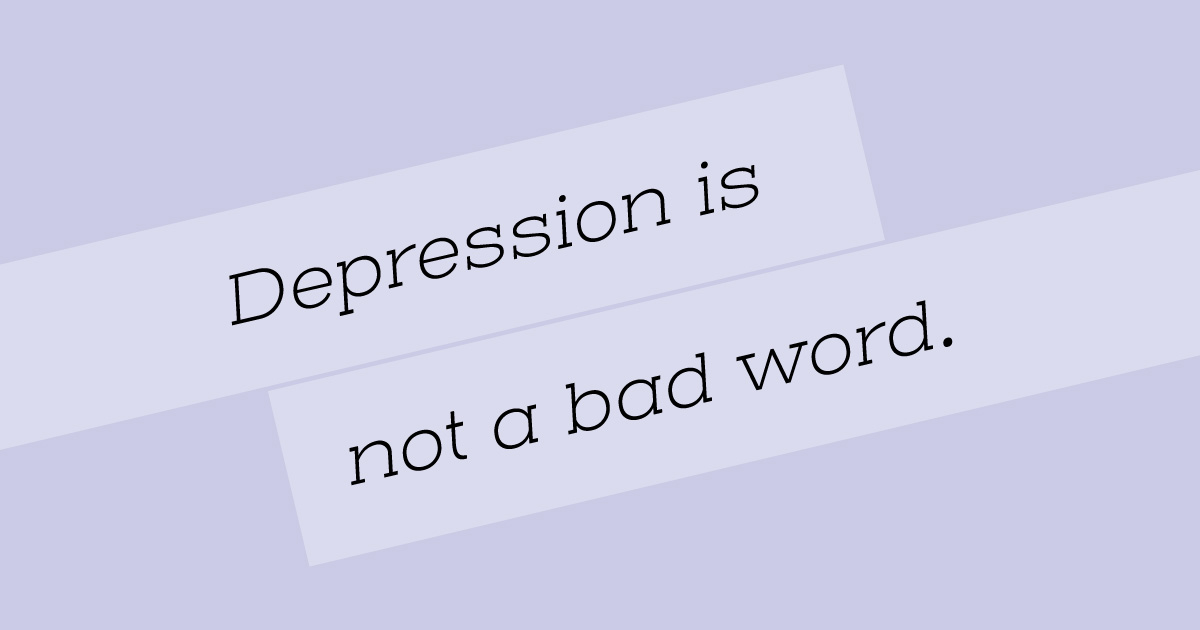 It didn’t happen overnight, but after a while, my friends stopped cringing at every mention of my mental illness and started asking about my experiences with therapy and psychiatry. My parents stopped squirming when I mentioned antidepressants and instead started telling family members how proud they were that I was taking care of my health. I can’t even count the number of people who have asked me to forward them the intake form for my therapist’s office.

There is so much power in talking about the things no one talks about. So many people are suffering in silence, simply because they’ve never been given permission to voice the things they’re going through. And sometimes if we are able to share our own story, we can help someone else understand theirs.

Years after my sister asked why I was “always sad” she, herself, was diagnosed with major depression. After her diagnosis, I started noticing signs of her depression that I had been oblivious to before. I sometimes wonder how things might have been different if I had been able to answer her question. Maybe she was asking about my sadness because in it she saw some of her own. If I could go back, to when I was 16 and very deep in my sadness, I would tell my sister that I have an illness called depression and that this illness is genetic in our family. I would tell her it only sometimes makes me sad, and other times it makes my chest feel empty and my hands go numb. I would tell her about things that help; like therapy and journaling and good music and taking deep breaths. I would tell her that if she ever feels like she can’t breathe, it’s OK and not to be scared. I would tell her to come to my room and climb into my bed, and we could relearn how to breathe, together.

Everyone, at some point in their life, struggles (in some capacity) with their mental health. Having depression, or any other mental illness, does not make you weak, or broken, or crazy. Even having trouble expressing or identifying your emotions is a normal thing to struggle with. Most of us have just never been taught how to have healthy conversations about mental health. I know it’s hard, but if you are struggling it is OK to talk about it. I promise depression is not a bad word.