There is no possible way I can touch on every detail of the rollercoaster I rode for years, nor do I want to relive it, but I am ready to write about it because I am no longer ashamed.

I am a recovered anorexic. At only six years old, I noticed my body shape—the squishy parts of my little legs, and the jiggles when I would jump up and down in front of a mirror in my bathing suit. At 10, I created an unrealistic exercise routine (which didn’t last). Years went by, but the downward spiral was unexpected and fast. By age 15, I was close to being admitted if I didn’t begin recovering quickly.

There were warning signs, but that doesn’t mean other people saw them. That doesn’t mean you can recognize the warning signs within yourself, either. For the record, I wasn’t an overweight child. Physicians never reported to my parents that I needed to lose weight. I believe some people are just born with a predisposition to mental illness. I am also a firm believer that certain life events can trigger suppressed mental illnesses. After years of therapy and self-reflection, I believe there were two possible triggers.

I may never know the reason why I had triggering thoughts as young as the age of six. I may never know what ultimately caused the downward spiral of anorexia. All I know is that it was vicious. It was an addiction like any other. 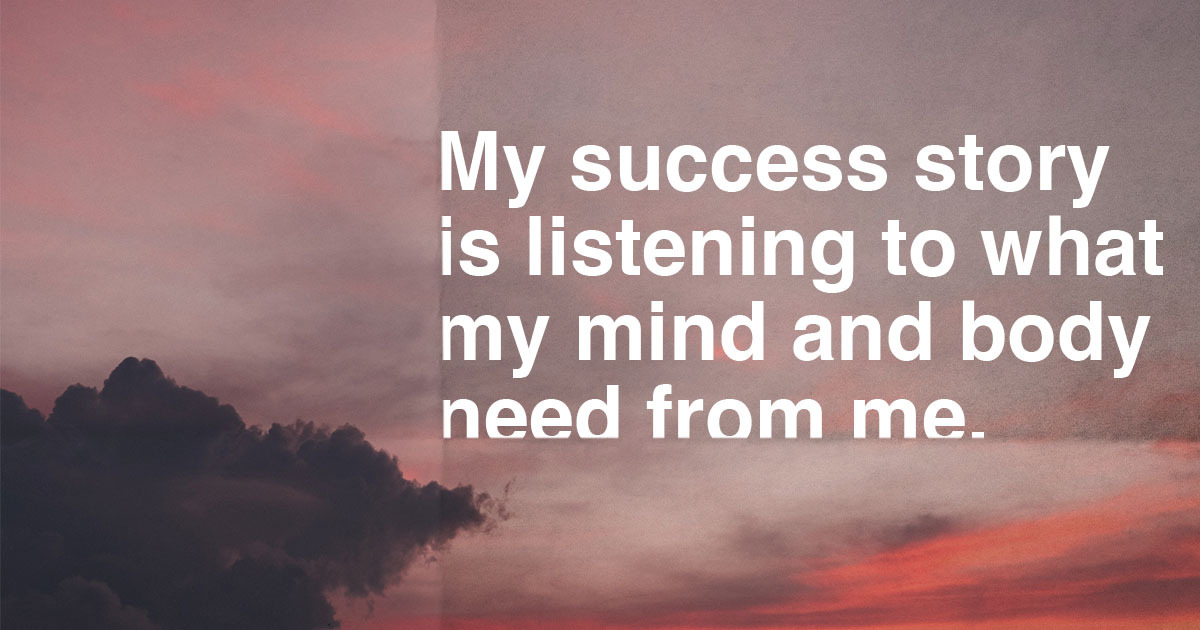 That is my story but that is not my success story. My success story is: fighting my ass off every day until I could eat a full meal without crying, without weighing myself after it, without trying to throw up. Having an incredible support system between my mother, a couple of friends, my psychiatrist, my psychologist, and my nutritionist. My success story is graduating from a vigorous medical imaging program at 20 years old. Moving out and getting my first apartment. Choosing to go for my bachelor’s degree in an accelerated program while working full-time because I knew I could do it. Crawling out from under the debris of a toxic relationship because I was strong enough to stand up again after being knocked down without relapsing. My success story is having the confidence to continue to progress in my career, to learn more every day, and maybe even sit for another board exam.

My success story is listening to what my mind and body need from me.

Being recovered doesn’t mean I am perfect. It doesn’t mean that I never have negative thoughts. As my psychologist taught me early on—even when you recover, you will still face some demons, but you can tell them to go away and keep them on the back burner of the stove instead of having the pot boil over.

That pot is on the back burner. It’s been there for years now. Some old water remains but it is mostly stagnant. I am in control again. I know how to keep it from boiling over.

You are more than a number on a scale or a measuring tape. You are human. Messy and whole, capable of so many good things, regardless of your body’s shape. We encourage you to use TWLOHA’s FIND HELP Tool to locate professional help and to read more stories like this one here. If you reside outside of the US, please browse our growing International Resources database. You can also text TWLOHA to 741741 to be connected for free, 24/7 to a trained Crisis Text Line counselor. If it’s encouragement or a listening ear that you need, email our team at [email protected].