This piece mentions the topic of sexual abuse of a minor. We ask that you use your discretion.

When I was a little girl, I used to play pretend in the fort my dad had built for me in our backyard, imagining the ground beneath me was an ocean full of crashing waves. I would climb the ladder and settle inside those four walls, waiting for someone to save me. I would do this for hours, fantasizing about a struggle and a resolution—a happy ending, if you will. At some point there came a time when I realized that no one was going to come for me. No one was going to rescue and take me away from this fort in the middle of a pretend ocean.

I was six when my dad first touched me. Years would go by until it happened again. But by the time I was 12, I had started barricading my bedroom door shut every night. It was late April and two months before I turned 13 when my mom passed away. My dad sent me to stay with my grandparents that summer and I used it as an opportunity to tell them what was happening. I never had to barricade my door again but I did find something else to build walls around: myself.

Inside those walls, I created a narrative—one that said I was alone. Over the years I wrote and collected more narratives: You are a burden and must take up as little space as possible. You must earn love in order to deserve it. You are worthless, you are disposable, and you do not matter. But the worst story I told myself was that happiness was not something that was possible for me—that all the good in this world was reserved for everyone else. And in part because of these stories, I allowed myself to be mistreated and used and hurt over and over.

There came a time when I found myself exposed. My fiancé had taken down my walls and began to write new narratives. In the beginning, they were good—ones that told me I could be loved, that I could have a partner and all the things I never dared to dream of like a family. But in the year leading up to our wedding, with alcohol on his breath, he began to tell different stories: I was weak. I had nothing to offer. No one would ever want to marry me. I should kill myself.

I thought this would destroy me and it almost did. But somewhere buried deep inside was that little girl playing pretend in her fort—wanting to believe in happy endings. I still hadn’t convinced myself I deserved something good, but I knew I deserved more.

Instead of retreating even further into myself, people who I did not expect to show up, rallied around me. They listened, they talked, and they made me laugh. They showed me how to depend on others without the fear of being dropped.

But now, I’m trying to create a new reality—one where happiness exists, one where I can erase the false narratives and write stories that are true. Stories that say I am enough and that I am not a burden; that I am not only deserving of happiness, but that it is possible. It’s hard to say these things and even harder to believe them. It goes against everything I’ve learned—everything I built over the last thirty years. There are times when I feel like it would be much easier to put the walls back up. But then I think of the friends who met me where I was and walked alongside as I climbed my way out of heartbreak, who exposed the lie and replaced it with the truth: I am not alone. So I go down the ladder and into the ocean, taking with me the little girl who believed in happy endings.

The waves come and they hit hard. But I hold tight to whatever I can find, and with each passing wave, I find myself that much closer to shore. 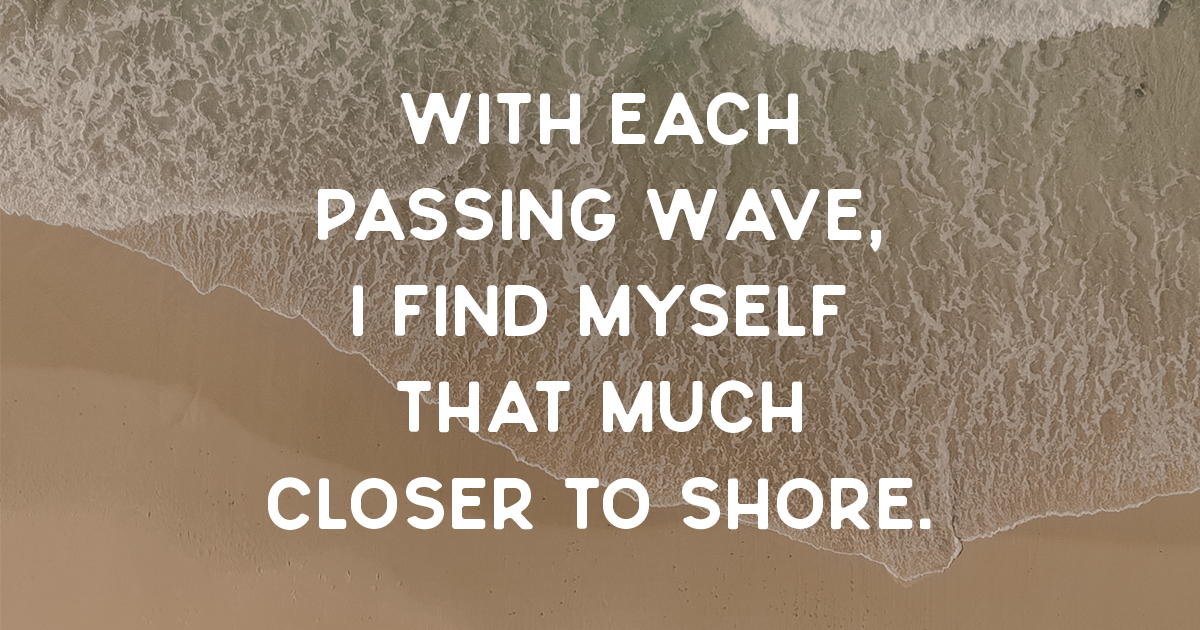