One of the earliest memories I have of my dad addressing my mental health happened when I was a freshman in high school. We were at church when I became overwhelmed with anxiety; I felt trapped and sick to my stomach—I was sure I was suffocating. I rushed out of the sanctuary and after a little while my dad came to check on me. At 14 years old I didn’t have the language to convey what I was experiencing, and I don’t know if he did either. The only thing we both knew was that I attempted suicide three days earlier. As my dad tried to console me, he suggested I take a raincheck on the plans I had to see friends that evening, and instead stay in. “Anna, you’re in that place, so I think it’s best if you take it easy tonight.”

I can clearly recall the feeling of confusion at his use of the phrase “in that place” but I didn’t ask for clarification. Instead, I took his advice. My best friend and I stayed in that night, watching movies and eating snacks in my living room. This proved to be the kind of self-care I needed. It was that day, and many others, when my dad did his best to protect my mental health, in his own special way. My best friend and I still laugh about my dad’s language for my depression and anxiety—all through high school we adopted the phrase “in that place” whenever we wanted to let each other know if we were feeling particularly depressed or anxious.

At the time, it was almost endearing, a funny-kind of dad-thing. But as I got older I noticed that the incident was not isolated and my dad used “coded” language a lot. I assumed this was because his view of mental health was heavily stigmatized, and as a result, I often felt discouraged from talking to him about my mental health. For a while, this was a point of strain in our relationship—as a young, highly-emotionally, hyper-sensitive girl dealing with severe depression and anxiety I struggled to comprehend the way in which my dad handled emotionally-charged situations. I didn’t understand why he fell silent when I cried or the blank look that overtook his face when I had a breakdown. I didn’t understand his resistance to things like therapy and psychiatry.

Growing up as a Black American, I often heard the phrase: “Therapy is for white people.” While this might represent a misguided mentality, for many underprivileged people it is an unfortunate reality. Quality care for mental illness is not built into the fundamental structure of the healthcare system in the United States, and in places that it does exist, it carries a heavy financial burden. Most people of low socioeconomic status do not have access to treatment—let alone the time or money to properly care for their mental health. After having conversations with my dad I realized that this, more than anything, was why he struggled to address my mental illnesses. He told me that he never felt the stigma around issues of mental health, but instead what he felt was dissatisfaction and frustration with mental health care. 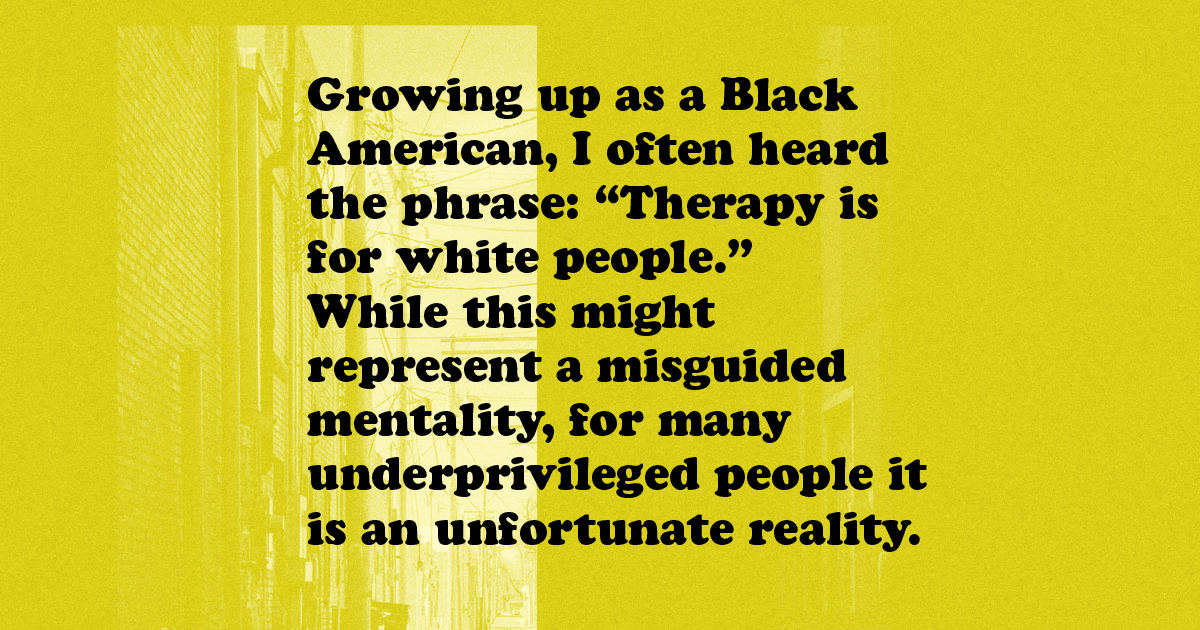 He grew up seeing the people around him seek treatment only to be treated extremely poorly, resulting in irreversible damage to their health and quality of life. Almost all of his experiences involving the mental healthcare system have had, as he put it, no “good endings.” These negative experiences, combined with not knowing the proper language of mental health care (and, at times, not having access to even learn it), put my dad in a position where he felt helpless; unable to articulate responses to my mental struggles and unable to help me acquire adequate care.

My first summer living away from home I suffered from a severe breakdown. My dad contacted the counseling center at my university to make sure I would be able to get in touch with a therapist. “I talked to them and told them that you were my daughter and that you have a history of suicidal ideations…”

I honestly don’t remember what he said after that. Between the ages of 14 (when I was “in that place”) and 19, I had attempted suicide at least once a year. But that day, at the age of 20, was the first time that I had ever heard my dad use the word “suicide” in relation to me. Surprisingly, hearing him say it was comforting—it nearly brought me to tears. There was something about my dad truly naming and acknowledging what I was going through, what I had been going through for so long, that made me feel validated and safe. For the first time, I didn’t feel like I had to tiptoe around my mental health. For the first time, I was sure that my dad saw me fully and had accepted the past decade of illness that had, in many ways, consumed our lives.

That was two years ago and the beginning of a more complete understanding of all the hard work my dad has put into ensuring I am cared for. Since then I have committed to being transparent about my mental health. It isn’t always comfortable. Sometimes I feel that when I use words like “anxiety”, “depressed”, or “trigger”, I’ve done something wrong—as if I’ve spilled a secret I swore to keep. I imagine it’s also uncomfortable for my dad; his daughter constantly injecting new concepts like “self-care” and terms like “trauma response” into his vocabulary—terminology he has gone nearly 60 years without.

However uncomfortable it may be, I am dedicated to continuing these conversations because I think they are a critical part of a journey toward healing, not only for me but for my entire family. After so many years of believing I had to deal with my illnesses alone, I want my dad to feel supported as he navigates the best ways to find and afford quality care for his family. And I hope that as my younger sisters see the way my dad supports me, encourages me, and consistently checks in, they feel comfortable talking about the things they’re dealing with, too.