The following is the condensed transcript of Danielle Hark’s TEDx Talk from March 7, 2017. The original post can be found here. You can also watch the video in its entirety here.

Have you ever felt scared and alone? Helpless, hopeless, or worthless? Like everything is suddenly out of control?

I was in the shower when it happened to me. Water was rushing over my body, when suddenly I started shaking and sweating. Feeling unsteady, I grabbed the clear shower curtain and fell to the floor of the tub. I started crying and sobbing uncontrollably.

I had experienced mood crashes before, having suffered through depression and anxiety on and off throughout my life, but nothing like this. I mean, this was a full on crash from outer space to the depths of the earth. It was scary. I was a wreck. I was inconsolable. I couldn’t breathe. I honestly felt like I was dying. On the floor of my bathtub. With my 6-month-old daughter a few rooms away.

I needed help urgently. So I grabbed for my cell phone, but when I went to dial 911 I accidentally took a picture, and then another, and then another. The corner of the room. A cracked mirror. The ceiling.

And the strangest thing happened. I started breathing a little easier. Suddenly, the tears slowed down. It was miraculous, or at least it felt that way. I wasn’t healed, but I could imagine getting up and getting dressed. I could imagine calling my therapist to figure out what the heck was going on. 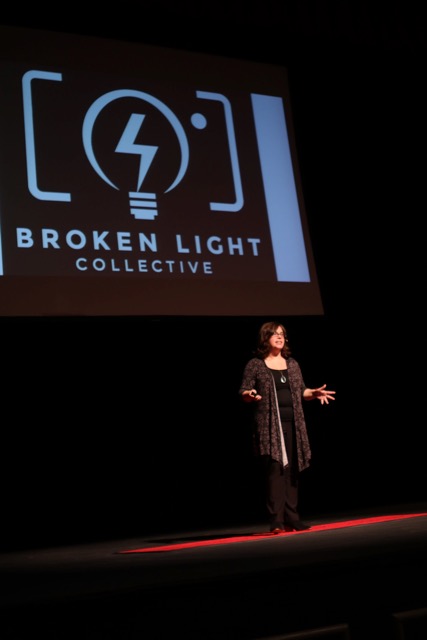 There were a lot of things I didn’t understand about what was going on that January day, but there was one thing I knew for sure… When I picked up my baby that night, and when she looked up at me with those big brown eyes, I knew I couldn’t leave her. I knew I couldn’t miss her life.

So, I had to face it head-on, whatever it was—depression, anxiety, bipolar disorder, borderline personality disorder—all of the above? This was life or death, and I wanted to choose life. I just didn’t know how.

Thankfully I had a therapist I trusted. So for about a week straight I talked to her for long periods of time while I was in crisis. And there was something we really connected on…and that something was photography, and those pictures from the bathroom floor. She was a budding photographer and was starting a photography class, and I had studied photography. I was a photography major at Ithaca College and I had actually started my own photography business.

So what she had me do was she had me follow along as she went, and I did the photography assignments that she was doing for her class, and that gave me purpose in my extremely dark days.

And it got me out of my house, even if that was just around the corner. Even if that was just to the end of my driveway or just outside my door. And we used those photos in my therapy sessions. They gave me a voice. They allowed me to express my thoughts, feelings, and emotions when I couldn’t do so with words at that time.

They helped me to express my dreams…

They allowed me to express feelings about abuse I had experienced, and not having a voice…

And feelings about mania and confusion…

It was a long way from the shower floor back to a somewhat balanced state. It took a couple years, and to be honest I haven’t quite made it there, but it’s not for lack of trying. And I’ve tried a lot of things, not just photography. I’ve tried doctors, medications. I’ve even been hospitalized a few times, where I’ve tried magnetic and even shock therapy, ECT. But I must, if not for me, for my husband and my daughters, now two of them. Because they mean everything to me. And I made a decision. And that decision was that ending my life was and is not an option for me, and I make that decision again each and every day of my life. And I will continue to make that decision, and I will continue to try, and I will continue to use photography as a tool during my darkest days.

But let’s go back… Join me if you will, back in 2012, in the months following my crash. I spent a lot of my time in my bed. So let’s go back to my bed. On one of those days, I decided to visit a site called WordPress.com, and for those who do not know, it is a wonderful platform for making blogs. I wanted to make a blog that would be a collaborative blog where myself and other people affected by mental illness, both themselves and through people they love (because there are so many of us), could come together and have a place, a safe place, where we could create, and we could put our photography and our stories, and support each other and feel less alone. And by putting our stories we could raise awareness and fight stigma.

I wanted to call it Broken Light Collective, because so many of us feel broken, but there can be a beauty in brokenness, and we can share this beauty and spread the light. A light of hope, a light of inspiration, a light of healing. In the words of my favorite band, the Beatles, “images of broken light which dance before me like a million eyes, they call us on and on, across the universe.” 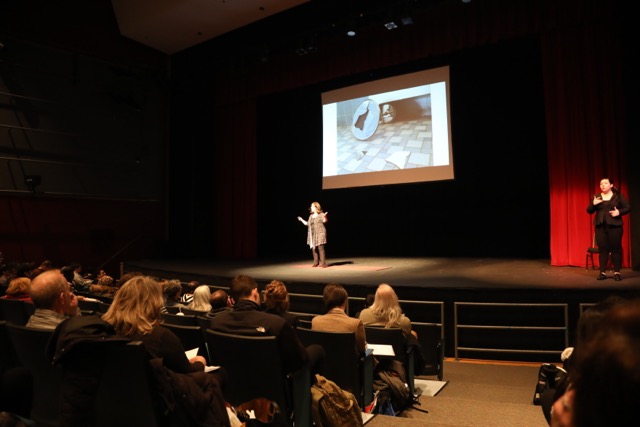 The first image ever posted on the Broken Light Collective was a self-portrait.

My head in my hands, with words written upon my arms. Words of pain and words of insecurity. Words such as: Fat. Vulnerable. Humiliated. Hurt. Unworthy.

And that Broken Light Collective community now has over 50,000 people, contributors and followers, from 181 countries around the world!

But it’s not the scale of our movement that’s most amazing to me, it’s the messages we get. It’s the emails. It’s the Facebook and Instagram messages, about the daily victories…

“I would not be out of my room if it wasn’t for Broken Light. It has changed my life.” – Colin

“The two photos you posted from me, wow, I don’t fully understand the magic it worked, but you publishing them lightened my load emotionally. A lot! It’s as if being connected via your blog was the final step in my healing. Both issues—the dissociative disorder and the battered woman syndrome—have improved greatly. THANK YOU for being there.” – Mary

“I just wanted to quickly say thank you, because I have been wishing something like this existed. I feel like I have come home.” – Jen

We cried together with BPD as she lay in her hospital bed with her head in her hands in the Middle East contemplating her existence.

We empathized with Kait as her diagnosis changed from Major Depressive Disorder to Bipolar Disorder.

And we cheered with Brandon as he overcame anxiety and self-harm, and he went to college where he started a peer group that was inspired by Broken Light Collective and the experience, so he could share with other people the experience he’s had with Broken Light.

Because 1 in 5 of us is affected by mental illness in a given year. Look around you, 1 in 5, that’s a lot of us. And every day, each and every day, there are about 121 suicides. That’s over 44,000 in a year, in America alone. We need to do whatever we can do. Whatever we can to help support each other and save lives. We need to use whatever tools we can. And photography and Broken Light Collective those are tools we can use to support each other and save lives. Lives like these lives. Like your lives. And my life.

I will continue to use photography therapeutically, whether I am coasting or crashing, and to encourage other people to do the same. To see beauty in the world around us, especially when we’re surrounded by darkness.