When I got the phone call about Preston, I was woken up amid deep sleep several hours before my standard morning alarm was to ring. The news was so nightmarish it felt like a dream. Suicide? Unlikely. In my family? You’re mistaken. And Preston… out of all of us 10 siblings? He’s always been even-keeled, emotionally stable. He doesn’t ask for anyone’s help; he never seems to need it. He’s fine, this is just a sick joke…or a dream. I even called him after the news, sent him a text telling him to reply back, so sure I had imagined it in my stupefied haze. But it wasn’t a dream, and I sometimes wonder if the intense craving for sleep following Preston’s suicide was my subconscious response to being jolted awake to the news of his death.

As many who have encountered grief can attest, the Kubler-Ross Stages of Grief are all-but-guaranteed to transpire when processing a loved one’s death. However, the ways in which denial, anger, bargaining, depression, and acceptance all occur are unpredictable, elusive. The intensity of each stage depends entirely on the person experiencing it and the event itself; it’s not atypical to experience a stage more than once during the grief process, and there’s no defined period for how long each stage might last. My initial shock and denial lasted for nearly three months before becoming depression. Even as the depression took hold, I re-encountered denial and shock—but this time, it was directed at myself. My internal script was the same: “I’m not depressed, I’m just tired. Preston isn’t coming back, I know this now. I’ve accepted this, and there’s no basis for any depression to occur within me. Everything is as okay as it will be, and we all just have to keep going. I’m not depressed. I’m just…tired.”

What happens when you’re tired all the time? For me, it meant withdrawing from numerous social communities because I couldn’t muster the energy to laugh, fake a smile, or respond about how I was doing for the millionth time. It meant isolating from my family, who were encountering their own unique grief processes, because I couldn’t stand to keep talking about “what happened” with them. It meant no appetite, but continuous weight gain because when I did eat, I chose the easiest food to consume and never followed my newfound convenience diet with any sort of physical movement. What was perhaps the most indicative of the fatigue engulfing me was my complete loss of interest in music. Despite a lifelong passion for songwriting, playing music, and a career in music therapy coupled with weekly performance gigs, I wrote one song, “Lullaby (to Preston),” the week after Preston died, and spent the next several months avoiding listening to music, let alone writing it. It required more creative and emotional energy than I could manage, and I was “just…tired.”

Major sleep pattern changes, vanished appetite, social withdrawal, loss of interest…I was checking all the boxes that would identify someone with depression on a clinical Mental Status Examination. Yet, I insisted—to others, sure, but most vehemently to myself—that I wasn’t depressed. “I need a break. I’m just…tired.”

But I didn’t feel better with a “break.” Four months into life without Preston, I felt overwhelmed with every task, from deciding on clothes to wear in the morning to thoughtfully signing a birthday card. Sleep became an enemy, because the thrill that once came with going to bed was replaced with the anxiety of knowing I would wake up the next day.

While it wasn’t the pivotal event that motivated me to seek help, co-writing a song, “Free,” with a beloved musical confidant did help me to feel less alone, and to admit that this was more than being “tired.” Kristen, a practicing clinical music therapist like myself, had also lost her brother to suicide shortly after I lost Preston. We could not have been aligned more similarly in the aftermath of our griefs, and the reprieve in sharing social space with her was what I had longed for: No explanations necessary, no well-meaning, but anxiety-inducing, questions about how we were holding up, no attempts to deflect the conversation had to be made. It was okay to be tired, overwhelmed, withdrawn, and simply, sad. So, when we were paired through a songwriting group to write together—which, admittedly, was a lofty project given our emotionally-fatigued states at that time—the collaboration flowed effortlessly.

Kristen came to the session with lyrics that had permeated her mind since her brother passed:

where no one sees,

where I am free…

Almost as soon as she shared her words, the song was finished. We both identified intensely with needing a safe space to feel our hurt, our sorrow, without questions from others, and to finding amnesty from the pervasive mental anguish that accompanied each passing day. The very first lines of “Free” begin:

I can’t explain where I’ve been,

and though everyone wants to understand,

it doesn’t mean they comprehend…

they can’t grasp where I am.

We didn’t fault anyone for being unable to empathize, but at least in this musical moment we were able to relate how heavy it felt to bear this unique sadness. And as we wrote the song’s final lyrics:

I thought I could find relief in my sleep,

but I’m not safe even in my dreams…

I was forced to admit that the mental script I’d been defaulting to was never true. I was not tired. I did not need a break. I was deeply depressed, and if I tried to keep going it alone, I was going to break. Fortunately, I wasn’t alone. 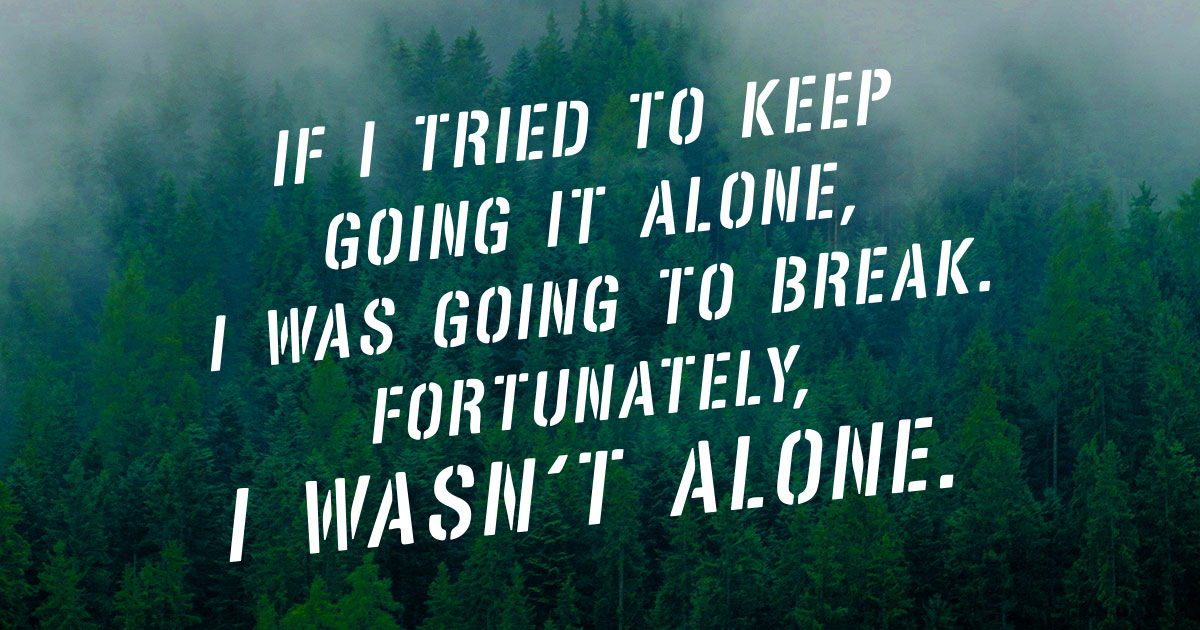 If you or someone you know is struggling with mental illness, please visit our FIND HELP page for local resources.

You can watch the music video for “Free” here.

A Letter From a Therapist: I Struggle Too

In a way, it’s a good thing—you don’t want a therapist who hasn’t been on the other side of the couch themselves.