Although Jared Padalecki just launched his Represent campaign last week, the “Supernatural” actor has already sold more than 24,500 T-shirts and sweatshirts. In this Q&A, we wanted to give Jared a chance to explain why he chose to support TWLOHA and what he wishes he could say to those struggling with thoughts of suicide.

TWLOHA: Why did you choose to support TWLOHA? Can you share how you first heard about us?

JARED: When I first decided to do this T-shirt campaign through the Represent company, I knew that I wanted to work with a charity (or charities) that dealt with the specific issues of mental illness, depression, addiction, and suicidal thoughts. There are a lot of wonderful charities out there that are tackling this issue head-on: Attitudes In Reverse, Wounded Warrior, and, obviously, To Write Love on Her Arms. After a bit of further research and reading, I decided that I wanted the majority of the money to go to TWLOHA (though I do intend to make donations to WW, AIR, and to a fund in the name of my friend, Matt Riley, who died by suicide on New Year’s Eve).

TWLOHA: Where did the inspiration for your “Always Keep Fighting” design come from?

JARED: The actual words on the shirt were a bit more difficult to commit to. We toyed with “never give up,” “never stop fighting,” “keep your head up,” and all sorts of iterations of the same message. I guess what ultimately made me settle on “Always Keep Fighting” was that I felt it was a proactive approach to these issues. “Never give up” or “never stop fighting” seemed (to me, at least) to have a bit of a negative connotation. Maybe it’s the word “never”? Whatever the reason, those slogans seemed to put the individual in a defensive position. I think these issues need to be tackled and dealt with head-on. For those who struggle, these things might not ever fully go away. THAT is why I think it’s important to acknowledge, to yourself, that you are in a fight. And, that’s OK. There are some lucky folks out there who don’t struggle with these issues, and I am truly happy for them. But, for those that do, it’s important to approach each day with the mindset of, “This might not be easy, but I am going to give it everything I’ve got.”

TWLOHA: If you could see anyone in one of your “Always Keep Fighting” shirts, who would it be and why?

JARED: I would love to see EVERYBODY in one of these shirts! Hah. Honestly, while it would be tremendous to see public figures wearing this shirt and sharing this message, I made it for the people out there who might sometimes feel like they are fighting this fight alone. I really went into this with the hope that people who are struggling would connect with it. So, I guess, I’d like to see somebody random wearing this shirt. Someone in an airport. At a restaurant. Walking down the street. I’d love to see them wearing this shirt, and then I’d love to go give them a hug and tell them I admire them and their strength and hopefully get to hear a little bit about them.

TWLOHA: What’s the scariest thing Sam Winchester has had to fight on “Supernatural”? How does that compare with what you have had to fight in your life?

JARED: Funnily enough, I feel like Sam struggles with the issues of depression and self-doubt. He also has, literally, tried to end his own life. In the Season 8 finale, Dean tells Sam that if he goes through with something then Sam will die, and Sam’s response is, “So?” That was a very powerful moment for me. I read it, and it made me cry literal, actual tears. I knew people who had that feeling. I, personally, had had that feeling. I think Sam understands that the most difficult or scariest fights aren’t the physical ones and that the scariest thing you can encounter is your own mind. Luckily for us (and for me, so that I can still have my job!), Sam has been able to persevere and stick around. But NOT without a little help!

TWLOHA: You wrote on your Represent campaign page that you’ve lost several people to suicide. If you could say one thing to someone who is struggling with depression or thoughts of suicide, what would it be?

JARED: I think people who are dealing with severe depression or having suicidal thoughts often believe that the world would be better without them in it and that the people around them would be “relieved.” I wish I could tell them that they are mistaken. It’s extremely painful to lose somebody to suicide. The pain and the questions don’t really ever leave. I still can’t talk or think about my most recent encounter without breaking down. To those who are struggling with suicidal thoughts, I would beg them to continue their brave struggle, and I would implore them to seek help.

TWLOHA: Finally, what inspires you to always keep fighting?

JARED: I am a very lucky man. I have many things to motivate and inspire me to keep fighting. My family, my friends, my work. I have been lucky enough to be in a place where I have asked for help and received it. I know that there are so many people out there who don’t have the same luxuries. This T-shirt, this campaign, is for them. My most sincere hope is that this will let people know that there are more people out there fighting similar battles. That they’re not alone. That people care. I hope this inspires people to ask for help. I am helped every day of my life. If somebody tells you that they have never been helped by anybody, then they are either lying or short of memory. We all get help in some way, shape, or form.

I’d also like to say that the fans of “Supernatural” and of Sam Winchester inspire me to keep fighting. I get to meet fans face-to-face several times a year, and they always amaze me and inspire me. They are, by and large, smart and strong, and their stories motivate me to be a better actor and person. I wish I could tell each and every one of them “thank you.” I hope this campaign is a step in that direction.

You can order one of Jared’s “Always Keep Fighting” T-shirts here. 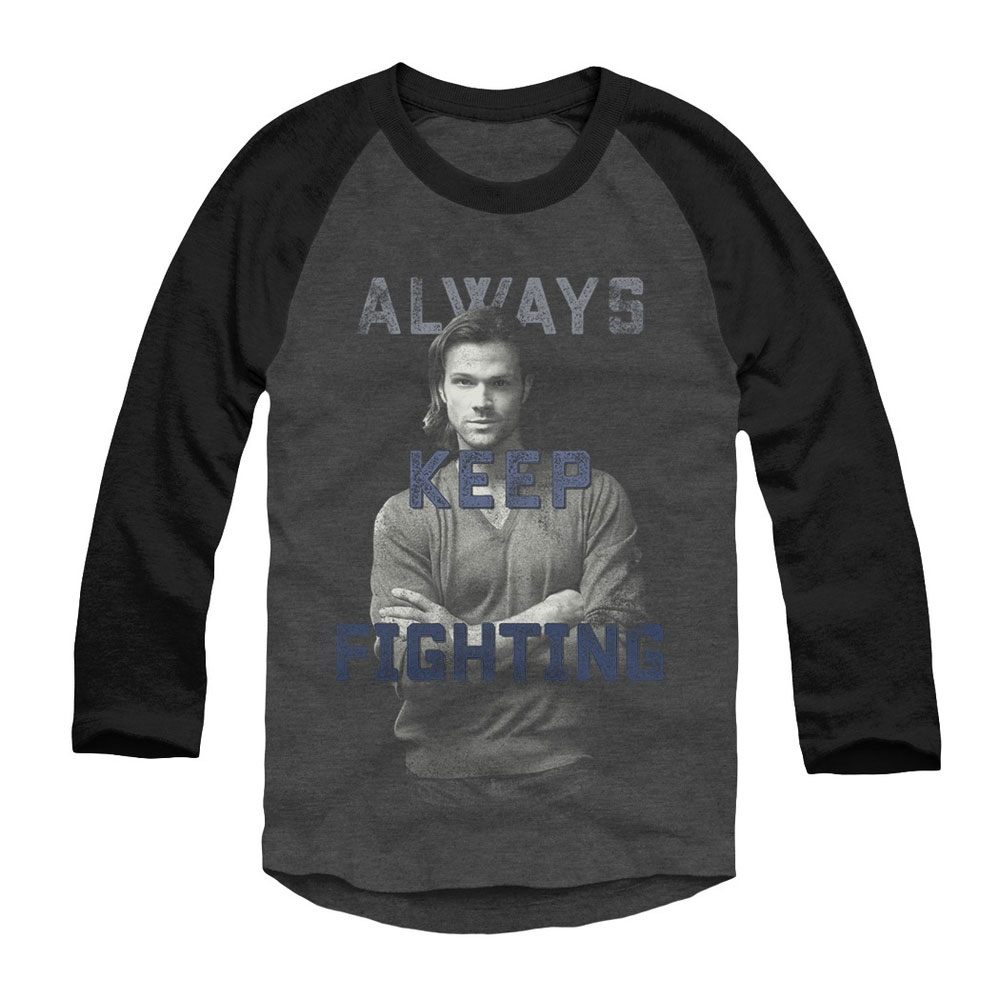