I remember the morning of October 5, 2010 perfectly clear. I was sitting in my apartment in New York City, annoyed and tired because I was getting the flu. I had gone to bed the night before thinking of all the things I had to do: the emails, homework, laundry, and birthday cards to send. So, when my phone kept going off at 11 am, my level of annoyance only rose. My best friend Astacia knows not to call me during work hours. But finally, I read her texts.

I rolled my eyes, picked up the phone, and called her back. She didn’t even say hello.

In those minutes, or what actually felt like hours, we were just silent. Because of my job with TWLOHA, I am prepared to respond to those words and unfortunately have had to many times. But when it’s a loved one telling you about one of your childhood friends, all the words seem to disappear.

We have to change those numbers.

We too believe suicide is preventable, and it’s something we focus on every day. We are joining AFS, IASP, and several other organizations to honor 2012’s NSPW (September 9 – 15) and WSPD (September 10). We’re also inviting you to join our efforts in raising awareness, building community, and sharing hope and prevention in several unique ways:

1. Get the Limited Edition Orange Title 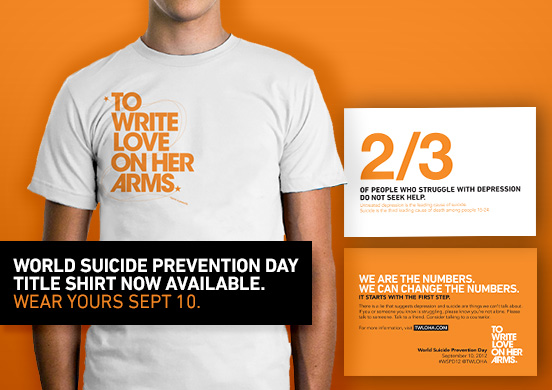 On September 10, join us in wearing this shirt proudly. Pass out the info cards to people in your community. Pin them up on bulletin boards, place a stack in an office, or put them anywhere people might need a reminder that hope and help are real.

From now until September 5, you can fill out the questionnaire here. During NSPW, we’ll be posting your answers to five very important questions. Each day, you’ll see a new blog on Tumblr featuring one question and responses from our supporters.

From September 9 – 15, all donations from our NSPW StayClassy page up to the goal will go directly to suicide prevention. We’re aiming to raise $7,000—$1,000 for each day. This money would contribute to furthering suicide prevention research, expanding mental health resources for military personnel, providing additional staffing for a 24-hour hotline, funding crisis counseling training, supporting awareness walks, and other preventative efforts.

Throughout NSPW and on WSPD, we’re asking you to get involved in your community and on social media. We’ll have an orange TWLOHA logo you can make your profile photo on Facebook, two hashtags to use on Twitter, Tumblr, and Instagram, and a special album on Flickr. We want to see what hope looks like to you, what suicide prevention and mental heath awareness are doing in your community, and photos of you and your friends wearing TWLOHA shirts.

We are inviting you into this because your voice and your story matter.

So I made a promise to myself that no matter what, I would wake up each day and keep trying to be a part of the solution—to look for answers to the questions, to try to stop another life from ending. I would do it for Charlie and for every one we have lost. I will keep fighting for this with you. I hope you will keep fighting for this as well and join us during September 9 – 15.

We’re all in this together.