November 11 is Veterans Day in the US. Less than 50 percent of veterans receive any mental health treatment despite their increased risk for depression, suicidal ideation, post-traumatic stress disorder, and substance use disorder. It is our hope to spotlight some of these experiences through a conversation we had with Chris Coyle. Chris is a US veteran who left the Navy in 2020 and is the brother of TWLOHA team member, Sabrina.

After nearly 12 years, you medically separated from the Navy in 2020. How did you feel entering versus exiting?

CHRIS: Entering, I was extremely proud, a little bit anxious. But I was happy to be following in my dad’s footsteps. And I felt like I was actually doing something bigger than myself, you know? Compared to when I left—a bit jaded. I had been physically and kind of mentally, emotionally injured, if you will, a little bit through the years that I was in. So it was a bittersweet exit, in some sense, because I felt the Navy had taken certain things from me. And now I have things that I have to deal with because of the time that I was in.

How did being in the military affect your personal life?

How would you describe your mental health at the start?

CHRIS: It was reasonably stable because I had this idea that ‘I gotta be tough, I gotta keep going,’ you know? ‘It’s more than just something for myself—it’s for my family, it’s for the rest of the people I serve with, it’s for the country.’

Did you ever feel that there was a lot of weight on you to take care of others?

CHRIS: Yeah, especially in situations where I became a supervisor. You’ve got people who rely on you and it can be quite a bit of pressure.

Was there a notable moment that motivated you to seek help?

CHRIS: There was a time when I was basically waiting to find out if I was going to stay in my squadron or get transferred because of medical reasons. And I had just gotten told that my [now] ex-wife wanted a divorce. And that absolutely threw me for a loop. I felt like I was spiraling. But I used a resource that the Navy has—their chaplains. They’re typically of particular religious faiths, but they’re also there to help. So I went and discussed with the chaplain what was on my mind.

I just didn’t really know what else to do so I started talking to somebody and despite feeling that once I go through this path there’s gonna be a stigma, I finally put into perspective that the only person who is gonna care about you the most is yourself. You have the most interest in getting yourself right. So I just put my pride aside and said, ‘You know what, I need to get myself right for myself and for my family and my friends.’

Did you feel stigmatized at any point?

CHRIS: I did. The military, it’s definitely more modernized today than, to a certain extent, when I was in. So there’s a lot more progressiveness, acceptance, or different lifestyle choices, and everything like that. But it’s still the military, there’s still the idea that you can get through it on your own. But sometimes, that’s not the case, sometimes you might need help.

If someone breaks their leg, they don’t just brush it off, they go to the doctor, and the doctor puts a cast on. Well, it’s the same for your mental health.

Did you ever feel that you could call out and just take a mental health day?

CHRIS: Absolutely not. That’s not part of the military. You can’t just take a day. 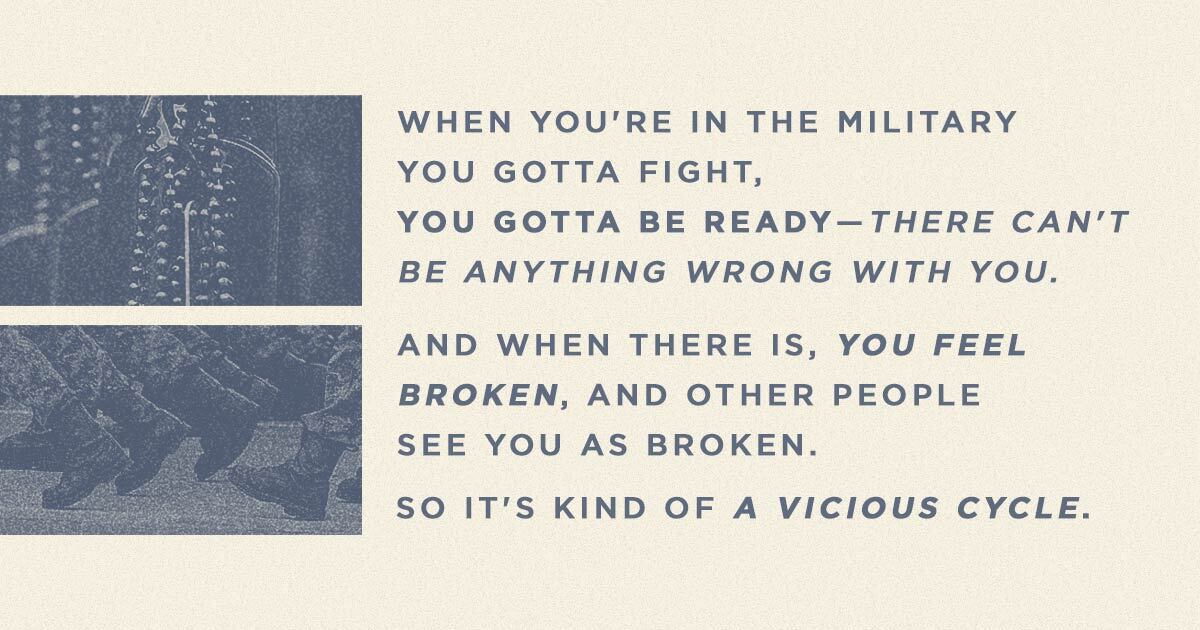 Say you’re dealing with depression, how does that work compared to if you’re, for example, sick with a cold?

CHRIS: Well, the unfortunate thing is, if you have a cold, you can go to the doctor, and the doctor will say, ‘You know what, you’re sick, here’s the medicine, you need to go lay down for the day.’ Mental health is a little bit different because it’s not something you can really see. I don’t think people take it as seriously, especially when they’re not going through it or never have gone through it or dealt with somebody who has gone through it.

In the military, everyone has a job to do. Your outside, personal lives don’t really enter that environment. Do you feel that separation causes even less understanding?

CHRIS: Yeah, I would say so. People are easily ready to scoff at things they don’t understand, especially as a collective. And who wants to defend that one person and get a bunch of flack for trying to care about a sailor, you know?

Now, there were definitely people who were there for me and genuinely cared and wanted me to be able to get help. And so I definitely appreciate those people, but there were also others who absolutely didn’t understand. And to some extent, they abused their power and their authority to belittle what I was going through.

Would you say that you had to keep your treatment a secret as you were seeking professional help?

CHRIS: First, I was not excited to have the idea get out that, ‘Oh, he’s got issues. He’s got stuff going on. He’s not stable.’ Because you can’t have anything wrong with you. When you’re in the military you gotta fight, you gotta be ready—there can’t be anything wrong with you. And when there is, you feel broken, and other people see you as broken. So it’s kind of a vicious cycle.

What resources were offered internally for mental health?

CHRIS: So in acute instances, you can go right to the mental health area, at least on my base, I’m pretty sure it’s pretty much like that at most places. But there’s family support and then there’s a medical clinic where you can set up appointments to talk with somebody. And if it gets to the point that they feel you need it, a psychiatrist will speak to you about medicine that can help. So there are resources, but you’ve got to put your pride aside and not really listen to what other people are saying and do what’s best for you.

Do you think there’s more the military can do to decrease the stigma and increase the awareness of mental health? If so, how?

CHRIS: Yeah, I feel in most things there’s always room for improvement. And probably by taking people’s cries for help a little bit more serious. Not just brushing them off. Just as if you’re a decent person in the civilian world and a friend or co-worker seems as though they’re going through something, your reasonable, natural instinct is to say, ‘Hey, what’s going on?’ That’s not always the case in the military. So the people, as time progresses, that are going to be in charge, it’s important that they recognize certain signs and encourage people to get the help they need to get. Not be discouraging and macho about everything and just brush it off.

How did what you struggled with in the military impact you and those around you at home? For instance, being a spouse and a parent.

CHRIS: As a husband, when when you work between 12 and 13 hours a day, it’s really hard to have a lot left to give to your wife and your kids. And it’s hard for them to understand because they’re not there with you working the whole time. And then, in turn, it makes you feel guilty that you’re not more involved. I don’t know how other people did it because to me it was exhausting mentally and physically a lot of times, and it makes it overall a tougher experience for the whole family.

Lastly, is there anything you’d like to say to other veterans or current military members?

CHRIS: To current members or veterans, remember: you’re your biggest advocate when it comes to your health in general. And your mental health is really important. Because not only does it affect you but it affects everyone around you. And just be more humble, just learn to be more humble so that you can put your pride aside and go get the help you need. Brush off the people who disregard you because they don’t know what you’re going through. They’re ignorant of the situation.

You are not a burden. The heavy you carry deserves to be shared, to be seen, to be known. We encourage you to use TWLOHA’s FIND HELP Tool to locate professional help and to read more stories like this one here. If you reside outside of the US, please browse our growing International Resources database. You can also text TWLOHA to 741741 to be connected for free, 24/7 to a trained Crisis Text Line counselor. If it’s encouragement or a listening ear that you need, email our team at info@twloha.com.

I am not ashamed that I endured an unsafe childhood and came out of it with some scars.