I have a terrible habit of standing in front of full-length mirrors.

Oh, and photos, photos are just digital mirrors, with the added horrible-ness of being shareable. And don’t even get me started on videos.

I have a complicated relationship with reflective surfaces. We are not “friends.”

There’s something oddly seductive about thinking you’re ugly. It’s comfortable and safe. Nobody can knock you down if you’re already lying on the ground. Standing tall always means risking injury.

I’ve architected a set of aesthetic rules that only apply to me. They are the universal rules for Sam. I assume the whole world inherently knows them, and judges me according to its scale, and I must abide by them.

I’ve never looked at a stranger and thought “Dear lord, sir, your nose is just unacceptable for society—please find the nearest cave and live the rest of your days in it.” But still, it somehow makes perfect sense that I shouldn’t look like this, that my eyes are, as a matter of fact, too big and protruding, like a crab.

There are similar facts applied to my ears, nose, jawline, entire skeletal structure, wrists, knees, and hands, to name the biggest problem areas.

I couldn’t tell you what I did last Friday, but I could tell you the first time some shitty kid made fun of my eyes. I remember the shock of it all, like I’d just been told the earth was flat, and I had to remap everything I thought I knew to make sense of this new information. My mom had always said I was incredibly handsome, but she has failing vision.

Like many others, I picked up a lot of beliefs about myself in childhood. Kids can be cruel, and from the outside, it seems like some people make it through unscathed, as if they have a nice Teflon coating. Me though, I’m one of the overly sensitive wad-of-gum types. I had enough sticky surfaces to collect all the hairy junk in my path and the malleability to work it in deep inside, until sifting everything out seemed impossible. I belonged in the trash, or under your shoe.  Or desk. Or car ashtray. Whatever.

What I “should be” and what I “actually was” grew further apart, and as the two began battling in almost all aspects of my life, my physical appearance became a key battleground for them to duke it out.

Intellectually, “should” is a ridiculously arrogant concept. Should is the denial of reality, the belief that this absurd world, mostly out of our control, has an obligation to meet our ideals, or may someday if we try hard enough. Should is a lie.

But that doesn’t change the fact that I should look like Zack Efron, because seriously, trust me, I should.

But there’s something worse than all the bad photos and videos and thoughts that suggest I may not actually look like Brad Pitt, and that is that I have lost the ability to actually see myself as I actually am. I went through a phase of bulking up, and gained 15 pounds of muscle. The tape measure said my arms were bigger, and my chest was wider, but when I looked in the mirror, I still saw the scared prepubescent boy.

There is no external offering I can make that satisfies my insecurities.

The mind is reality-bending. The mind bends truth. It tells me the one thing that I believed as a child, that one thing that gives me any sense of, or shot at control:  the belief that I am defective.

Something funny started to happen when my life was flipped upside-down over a year ago. There wasn’t an abundance of energy to go around, so I had to pick and choose battles with myself. I was looking at the task of learning how to be a good partner to the right person one day (there was a lot of work to done) and being prettier wasn’t mentioned anywhere on any of the exit surveys. 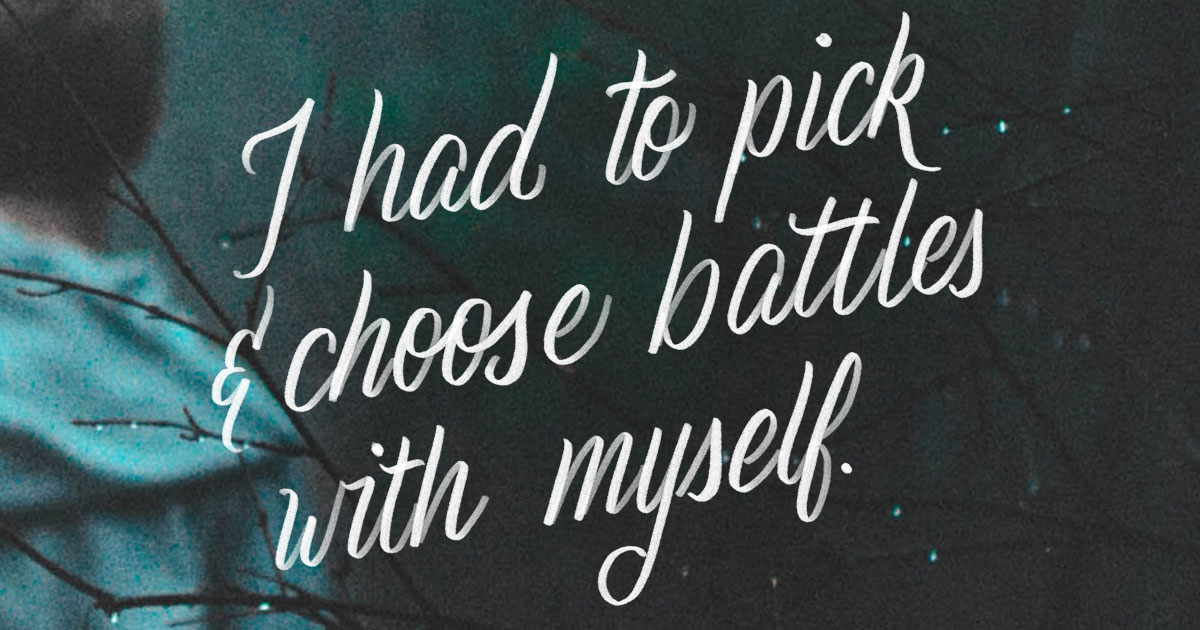 So, in an accidental act of defiance to the rules of Sam, I dropped how I should look as one of my agenda items and the official new policy was “I have no opinion on the matter.” Previously, this would have been kryptonite to a self-righteous, opinionated contrarian like myself.

In the beginning, it was a bit like getting asked a controversial question at another family’s dinner table. I’d grit my teeth and cringe my way through “I have no opinion on the matter.”

I started getting tagged in photos because when friends would ask if they could post the photo, well, I had no opinion on the matter.

I eventually posted photos that included myself in the photo because I didn’t have to take an entire photo shoot to find one photo I could bare to represent myself.

One day being particularly impressed with how many things have to go right for the human body to work I even got “well made” tattooed across my knuckles. That day, my mom was the one with “no opinion on the matter.”

Coincidentally mirrors got awfully quiet, almost like inanimate objects. Their usual routine of picking me apart piece by piece in a voice that sounds surprisingly similar to my own was replaced with silence.

And sometimes, when it feels right, I’ll even break the new no opinion policy, and blurt out something nice about myself in the mirror and run away before it can respond.

You Do Not Need to Earn Love