This piece mentions the topic of suicide. Please use your discretion.

Reading The Bell Jar by Sylvia Plath as a teenager, gave me my first ever “aha!” experience. In that moment, I remember vividly thinking to myself: I know exactly what that feels like. An extremely talented writer, Plath bravely documented her struggle with depression, that which eventually led her to die by suicide. Before that, I never knew the words for what this is.

Looking back, as a child, there was always something that was just a little “off” about me. Unlike most children, I couldn’t stand to be around others my same age. I preferred being alone or sitting with the adults who played cards late into the night. Truthfully, I was terrified to leave my mother’s side for fear that something would happen, and we’d be separated. There were several attempts at sleepovers, all of which failed miserably. Each time I swore I’d be able to stay the entire night, only to call my mother late to come pick me up. There was an overwhelming anxiety and sense of panic that I just couldn’t shake.

Truth be told, there’s probably a good reason for that. At best, my childhood would be described as tumultuous. My earliest memory of life is witnessing my father get arrested for physically abusing my mother and holding her hostage. I was two. I relived that night several times a week after I fell asleep, only to wake up crying like that little girl in the dream. The nightmares didn’t stop until the end of high school. We were poor and lived in government housing for a while. My mother struggled as a single parent of three girls, often working two jobs. We were surrounded by addiction and alcohol. We moved at least once a year. Honestly, I don’t feel like I ever had a childhood.

Over the years, my friends and partners have picked up on my past and the trauma it entails. But they never ask for details and I don’t offer them. I’ve kept most of my struggles to myself. Admittedly, a part of the reason is because I never wanted pity from anyone. Secondly, the stories we tell become absorbed and carried by the listener. I lived it. That is enough.

Needless to say, my adolescence contained a little extra angst than the general population. I’d spend at least 12 hours a day in bed and was filled with a suffocating anger that could not be smothered. I felt victimized. I felt abandoned. Nobody, not once, stopped to ask me if I was okay. I felt invisible. I was sick of always being at the mercy of the choices others made. And, I was really pissed off. A child pissed off, is a child participating in a masquerade to cover up pain. My MD diagnosed me as having Manic Depression, which is the equivalent of Bipolar Disorder today. He recommended therapy. I went.

What they never tell you about therapy is that the success of it hinges largely on that particular therapist. A good therapist can be absurdly helpful, offering insight, new perspectives and tools for coping. But, a not-so-great one can leave you feeling even more alone than when you entered through those doors. I’ve had horrible experiences that were a waste of time, as well as really good ones that I wouldn’t change for the world. But my first interaction with therapy, unfortunately, falls into the former category.

I arrived at her private practice, out of her penthouse condo on the beach. Our first visit was filled with the usual “get to know you” questions and she was clearly distracted, as she answered phone calls and dealt with her cat. Our second visit was worse. This is where I was interrogated about my diet and nutrition. She insisted that if I just ate better, everything would be fine. I somehow didn’t see how carrots would stop me from hurting myself.

I was never proud of self-injuring. There are many assumptions made when it comes to self-injurious behavior. Often, people like to play it down as ridiculous attempts to gain attention.  However, it’s actually an attempt to gain some control in a world that never seems to stop spiraling. In those moments, I wasn’t thinking logically. You don’t just wake up one morning, look at your schedule, find some free space and write: “Excuse yourself to the bathroom. Hurt yourself.”

Those moments came crashing upon me and all of a sudden I was struggling to swim against a current I could not see. Trapped in that secret place in my mind, I could not move. This is the place where overwhelm transcends into paralysis. This is the place where you want to grasp reality. You hurt to cause a tangible act. You are in control. It stops when you want it to. You’re draining the emotional pain that follows you around like a shadow that is not wholly your own. After the relief, enters shame and the promise that you will not do that to yourself again. It’s okay if you end up breaking that promise, as long as no one else knows. 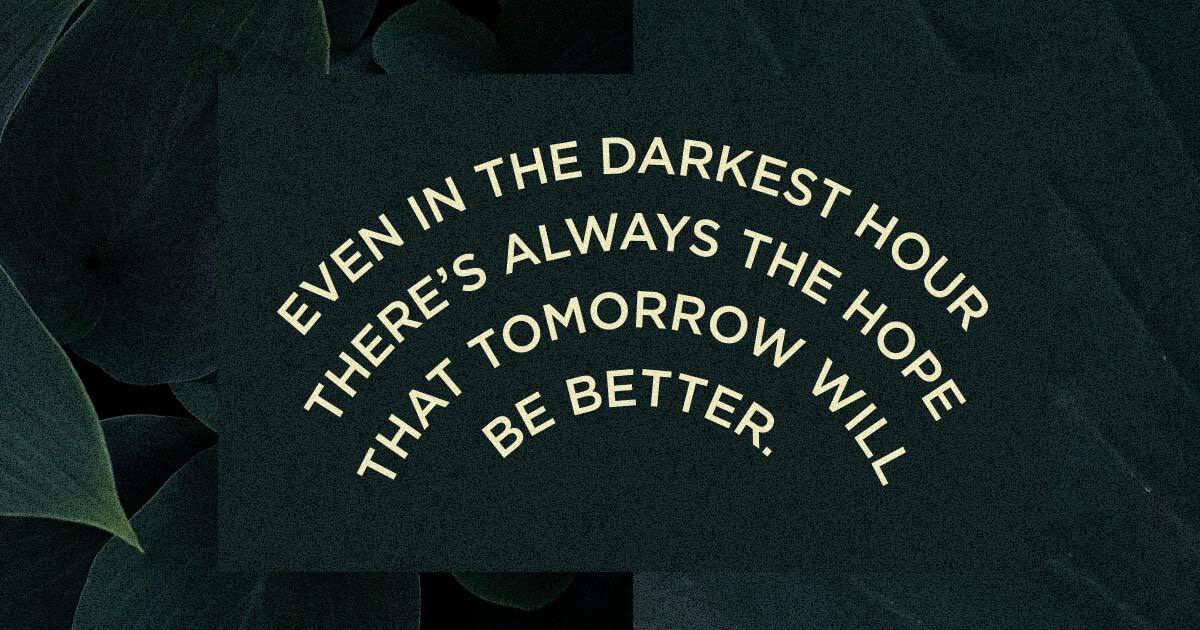 I never went back to that therapist. But, I did go on to see another who actually helped me feel pretty all right about being alive. I continued to go over time as needed. I like to think of it as routine check-ups. Although I haven’t been in a while, I now have a wonderful view of therapy. I mean, there’s this person who is totally unbiased and basically has to listen to whatever you want to say.

You’re the star of the show! Plus, you can learn a thing or two. If you need to talk to someone, please do and don’t let a bad experience deter you. If the first one isn’t a good fit, move on to someone else. Eventually, you’ll find what you need.

As I became an adult, my knowledge grew of the different diagnoses and resources available for those of us dealing with mental health challenges. After therapy, I felt I had a much better grasp of reality and that my self-awareness was enhanced. I understood myself better and was able to deal with a lot of things that had been holding me down over the years. It got to the point where I considered myself to be pretty healthy and in good shape.

During college, however, I experienced a series of triggers that sent me on a downward spiral. There was an unexpected breakup and a sudden move I wasn’t prepared to handle. This transition period took a toll greater than anything I had ever dealt with before.

Maybe part of the reason was that I didn’t see the breakup coming. Usually, prior to a breakup, there are many discussions about unhappiness. Usually, there are some mutual concessions, where each person gets a chance to address what they want before a decision is made. Not this time. Two weeks later, I was living in another state 1,500 miles away.

It was worse than painful. It was numbness. I could no longer feel anything at all. I was just so tired. For the first time in my life, I lost the spark within me to fight. Completely depleted of the energy or drive to stay alive, I dearly wished that I had not been born. My doctor recommended medication.

I had never taken pills before. I didn’t want to. I was afraid of the side effects and didn’t want to be a walking zombie. Secondly, I was too stubborn and prideful. I didn’t want to admit that I couldn’t handle it on my own. And, who really wants to be tied down to swallowing a handful of pills every day? But, I agreed and began a combination of a sedative and an SSRI (Selective Serotonin Reuptake Inhibitor).

It started with a low dosage. And, it worked. It took the edge off, so I wasn’t standing on one. There were side effects to deal with. Most of which were stomach-related, with occasional deficits in the area of intimacy. Unfortunately, there’s not one magic pill that will work for everyone and for all things. You have to maintain a keen awareness of what’s going on inside of you at all times and become an advocate for yourself.

Today, my diagnoses include General Anxiety Disorder or GAD, panic attacks, insomnia, and a “moderate level of depressive episodes.” Basically, I can’t really handle the feeling of being out of control. I still battle bouts of depression at times. It’s not totally uncommon to find me curled up under a desk or sleeping in a closet. Small, dark, quiet places comfort me. It’s as if there are two people duking it out inside of me. When you’re capsizing in the sea of nothingness that is depression and anxiety, a part of you knows that it’s irrational and ridiculous. And still, you can’t stop it.

Yet, the good days outnumber the bad. Despite all of the unpleasantness that pills come packed with, I would have to agree that they’re worth it. Understanding what I need to function and allowing myself to have it without shame, helps me to get through. Even in the darkest hour, there’s always the hope that tomorrow will be better. And, it always is. You just have to push through and own it, so it doesn’t own you.

If you’re out there fighting a war within, know that you are not alone. We need to squash the shame and stigma. Self-love starts with doing what it takes to take care of you. Although it’s a battle we fight daily, keep fighting. Go to therapy, take meds, call an anonymous hotline, commune with nature, eat carrots—or whatever it is that works for you.

We may be bruised but we are not broken.

Sara Giza is a queer activist, who divides her time between advocacy work and freelance writing. She has a master’s degree in Social Work and an Executive Program on Leadership Strategy for Violence & Abuse Prevention certification from the University of Pennsylvania. She’s been a stinger for LEO Weekly and The Voice-Tribune in Louisville, Kentucky, as well as Scripps Treasure Coast Newspapers and Vero Beach Magazine in Florida. Currently, she’s a feature writer and Senior Editor for Embrace Magazine, Central Florida’s first and only publication dedicated to the LGBTQ+ community. Connect with her on Instagram @searingsara.