My toxic relationship with food began when I was 14 years old. That year saw my first heartbreak, contributing to my already-low self-esteem and plunging me into depression. A few months later, my parents separated. A week after that, an aunt I spent my entire life with suddenly died. And just two days after that was Valentine’s Day, which I spent quietly feeling numb and hopeless and as far from love as possible.

In the aftermath, I only saw one explanation for such incessant tragedy: I was to blame. Even without any legitimate reasons as to how death or separation could be my fault, I carried the weight nonetheless. I knew the people around me didn’t share this belief but I could not shake the thought that maybe if I was better, life would be better. The solution: stop eating.

I knew how unhealthy it was but in my mind, it felt justified—I needed to take up less space so I wouldn’t continue to burden those around me, and I needed to accomplish this as quickly as possible to eradicate the heaviness overtaking me. My weight was the only thing I appeared to have control over, so it became my coping mechanism. In reality, this is what I thought I deserved.

I started lying to friends and family about what was happening, keeping it a secret by eating barely enough to prevent them from getting suspicious. The few times I ate (mostly to appease my family) led to me worrying that I wasn’t skipping enough meals or making progress quickly enough or controlling myself enough. I knew I had an eating disorder, but I felt like I had failed at doing it “right.”

I began obsessing over arbitrary but tangible things that I thought would give me a sense of accomplishment. If I comfortably fit into this one pair of jeans, if I could stay under a certain weight, if my stomach growled so much that it was in pain by the end of the school day, I had earned the right to feel proud.

But no matter how much I tried to “succeed” at this dangerous game, the pain from all the things that provoked my disorder did not disappear. I went through every day feeling nothing at all and everything at once, wanting it to stop, praying it would stop, not knowing how to make it stop.

It was about six months before my mom caught on and took me to a counselor. Although I knew my parents wanted to help, I couldn’t stop feeling like I was only causing more trouble. I spent another six months tangled in the vines of disordered eating, knowing I had the resources to recover but still afraid of what the healing process might bring.

That fear subsided when I allowed those I was close with to show how much they love me, and why they do. The disorder became less powerful when I realized there is no wrong or insufficient way to suffer. The cruel, intrusive thoughts seemed more distant when I acknowledged that I don’t have to justify my pain to anyone—not even myself.

It’s been almost a decade since I returned to eating regularly and being proud of myself for it. My relationship with food still has room for improvement, but I have moved past feeling guilty about eating, about existing. It has taken active effort every single day to be able to say that, and I still have days when everything around me seems so chaotic that I am tempted to crawl back into the disorder’s false safety.

And yet, even the deepest and darkest parts of my mind know that I am not a burden. The amount of space I require will never change that. Every cell in my body celebrates the fact that my value is not based on numbers and measurements. My worth is not dependent on meeting meaningless standards that say nothing about how I empathize, how I care, how I love.

And yours isn’t, either. You deserve to exist in this world as you are, unconditionally and unquestionably. You belong here. 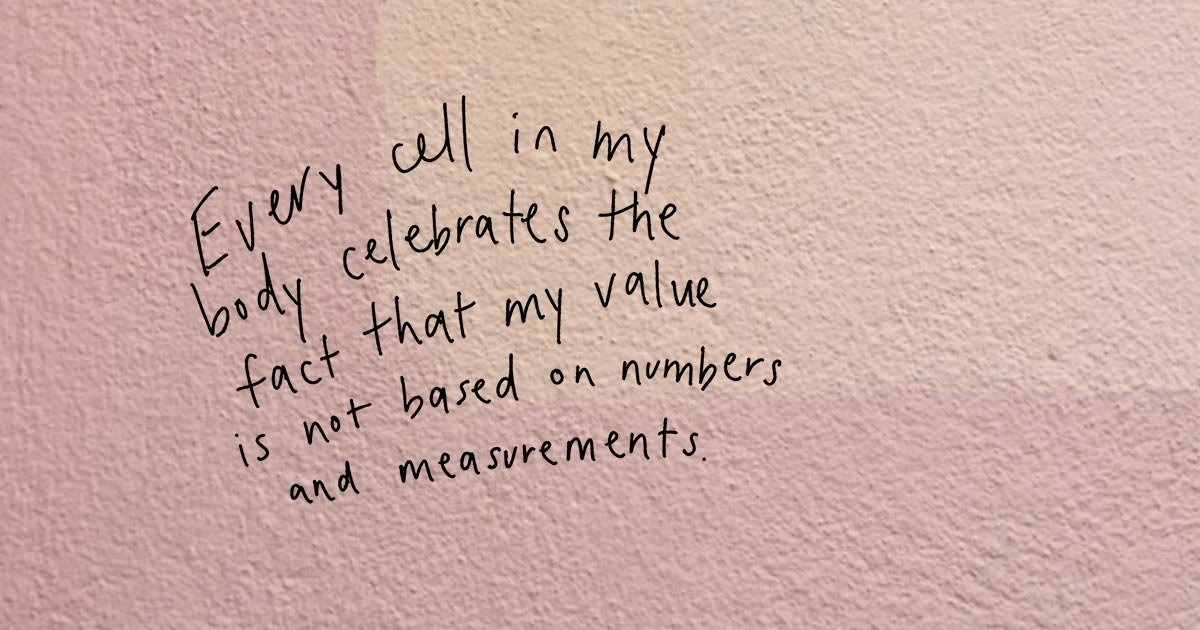 If you or someone you know is dealing with disordered eating, please reach out for help. We invite you to use our FIND HELP Tool or you can find resources and information through our friends at NEDA. There is hope, there is help. You are worthy of life, worthy of recovery.

The relationship with my body is a complicated one—with ups and downs, celebrations, and resentment, but as of late, a lot of acceptance and contentment too.