At the age of seven, I had lost two fathers. My biological father, Leonard Russell, abandoned my mother and me when I was still a child. My father who raised me, Tim Thompson, died in a motorcycle accident in the spring of 1998. Nevertheless, it wasn’t until the untimely death of my best friend, Joseph Gilliam, on September 11, 2018, that I really started to process and deal with those losses.

Joe was incredibly mature and grounded for his age. He inspired me to sort my life out and find inner peace. Still, even after meeting Joe I thought I had all the time in the world to “deal” with my issues. I was going to Purdue University and double majoring in Communications and Sociology. The NFL was knocking on the door, and I was becoming the patriarch of my family. I didn’t have time to deal with all the baggage I was carrying on my shoulders. Instead, I shoved my emotions down and repressed how I was feeling because that’s what men did, right? I didn’t have many examples to go by when it came to manhood. I wrote poetry in secret when things became overwhelming and attempted to pour over. Joe knew I wrote. He was my best friend, my teammate, my roommate, and sometimes even my therapist.

After Joe passed, how I perceived time changed completely. I didn’t have all the time in the world anymore, and the emotions I was feeling began to snowball and become destructive. Every loss felt like losing my father again and I no longer had my best friend to lean on. For the first time in years, I was drinking to the point I couldn’t recall my days or nights. I contemplated suicide more than once and exhibited reckless behavior frequently.

Joe’s death brought up past scars as well. Growing up without a father, early years of abuse, looking for love in toxic relationships, and drinking to cope. Every problem I ever tried to repress was now suffocating me. As a young man, at the height of my athletic career, I was lower than ever. But as an NFL player, no one took my depression seriously. How could I be so down when I was living my dream?

So, I turned to pen and paper. I wrote as a sort of confession, as a release. 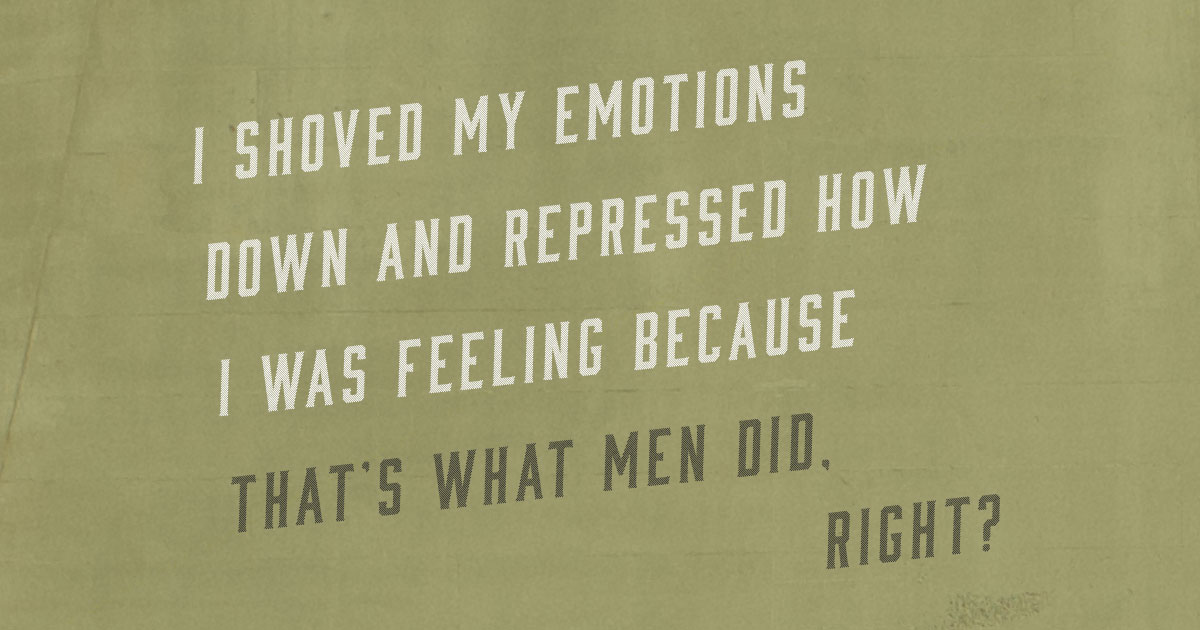 On April 26, 2019, my debut poetry book Prison or Passion released. A poem from that collection, “The Boy and The Demon,” features three characters: a boy, a demon, and the narrator. Throughout the book, I depict the turbulent relationship between myself and my biological father, so it is easy to attach that trauma with this poem. The narrator can be seen as my father, I as the boy, and the demon as all the wrongs done to me. With a few reads, you might also see the other crosses I bare…

I am both the boy and the narrator, using the demon as a coping mechanism. The boy is my innocence, optimism, feelings, and ability to connect and be vulnerable. The boy is what I would describe as my humanity. The boy also feels pain, has been betrayed, and has empathy. He feels the loss of both my fathers and my best friend.

The narrator describes his one purpose throughout the poem, he longs to be efficient and strong. The narrator believes the boy hinders him from doing this. He sees emotions and grief as unnecessary weaknesses.

The demon is an unhealthy attempt at silencing the boy. The demon is a representation of my alcohol abuse during times of pain and struggle. The demon is also a metaphor for self-harm. The narrator feeds the boy to the demon and though in my case, the demon never kills the boy but not through a lack of trying.

I fed the boy to the demon.

Crown first the way his mother bore him.

The monster was more teeth than jaw.

He danced on four legs like that of a stead.

Claws the size of pitchforks.

The demon was mute but I knew his hunger.

He craved what only I could give, what I always gave.

He stayed as long as he liked, my life his dominion.

The boy, however, was my claim.

Eyes that tell all.

Hands that fumble with every touch.

Bountiful curls atop his head.

Rambunctious soul of his.

But the boy must have known he was my sacrifice.

Why else would I keep him?

I was much stronger than the boy. Strong in the sense that others valued.

I was high functioning and non-threatening.

Always visible but just out of reach.

Without me the boy was vulnerable.

With him so was I.

He was hysterical laughter or gut-wrenching screams, never anything in between.

The world so small through his lens, everything so bright in his mind’s eye.

A type of rose-colored frame, had the boy so mesmerized

he hardly saw but always empathized.

Spitting the boy out broken, but intact, right at my feet.

He lay on his back the way his father buried him.

I succumb to our ritual

Apologizing and promising to never forsake

He is afflicted with a naive heart and forgiving soul.

In no time at all, he forgets and I wait.

I will feed the boy to the demon again.

It would be tragic if I let my demons truly eat away at everything that makes me human. The boy makes me a passionate lover, a kind friend, a loving son. I have suffered enough loss. At the end of the day hurting myself or trying to separate myself from my pain won’t bring my father back, or my best friend.

Hurting oneself only adds physical pain to the emotional. Now, instead of trying to repress my feelings I use them to honor those I’ve lost. I write to help others through similar experiences. I work in the community to help children in single-parent homes. Even in my day-to-day life, I try to exemplify the characteristics taught to me by my stepfather. I try to be the type of friend that Joe was. Living in harmony with oneself, one’s emotions, is the best way to not only honor those who have passed but to live.

Trauma Convinced My Brain It Was Normal