It has been three months and two days since my last suicide attempt. I don’t stand under the harsh glare of this spotlight seeking any kind of pity or praise. But rather as a fellow friend, that has seen the battered and broken bottom of what bipolar depression can look like. One who has fought to beat the odds and lived to tell the tale. I am a voice for those who feel their story has been left untold. I aspire to be that familiar hand you’ve always needed to hold, and the shoulder offered for more than leaning.

We will never know the true measure of anyone’s pain, nor can we accurately gauge their proximity to failure or progress: what I deem to be a mark of success may not be the same as someone else. However, I realized the story I was yearning to read was, in fact, one more like my own. I wanted to hear the candid account of someone in the middle, maybe just past the hardest days of this illness, but not quite to the happy ending where you’ve reached the place you never thought you would. Those narratives are inspiring, and they give me hope for the kind of future I didn’t think I could have. Many people speak on behalf of those who succumbed to their illness through suicide, and I have heard equally as many of those that have “ended” in happiness and success. Anyone who has courageously combated a mental illness knows success doesn’t even need to look like a life of riches and luxuries, but more essentially a home, a healthy and loving relationship, and a career that supports you. But what I haven’t heard much of is from those of us in the middle. It’s easy to feel alone in your struggles and pain when you don’t fully resonate with the people and stories around you. A greater sense of comfort can be found in that very specific kind of comradery.

In the not so distant past, my prospect was bleak and observed through the sadness of hollow eyes. There were days at a time spent in bed with anguished tears that turned into desperation and hate and then back again. I quit my job due to the rapidly declining and fragile state of my mental state. More than once, more than twice. I pushed away friends in fear of burdening them with all my pain. I dropped out of school. I wasn’t capable of being in a healthy romantic relationship, not to mention the difficulty of explaining the large gaps in my dating history due to mental breakdowns and the sheer lack of desire to be romantically involved at all. I have made two suicide attempts, with the most recent being three months and two days ago. It’s like a cancer. Except instead of deteriorating your body, it goes for your mind and the pain emanates from there. It gets worse, the pain doubles by the day. But instead of the cancer taking your life, you’re left there, in a state of agony and no reprieve in sight. If you’re here in this place my sweet friend, please know I have walked there, too. And I promise you it can, and will get better than this.

Today, I am in a newly reached sort of remission. The warmth of sunlight has finally started to melt the heaviness of a long winter’s snow. My mood has found stability, and while my successes aren’t quite tangible, I have achieved many small victories through the help and guidance of therapy. In a world that values speed and instant gratification, I remind myself that to travel at a slow and steady pace is nothing short of admirable. These hurdles are not insignificant and in that, I stand proud. 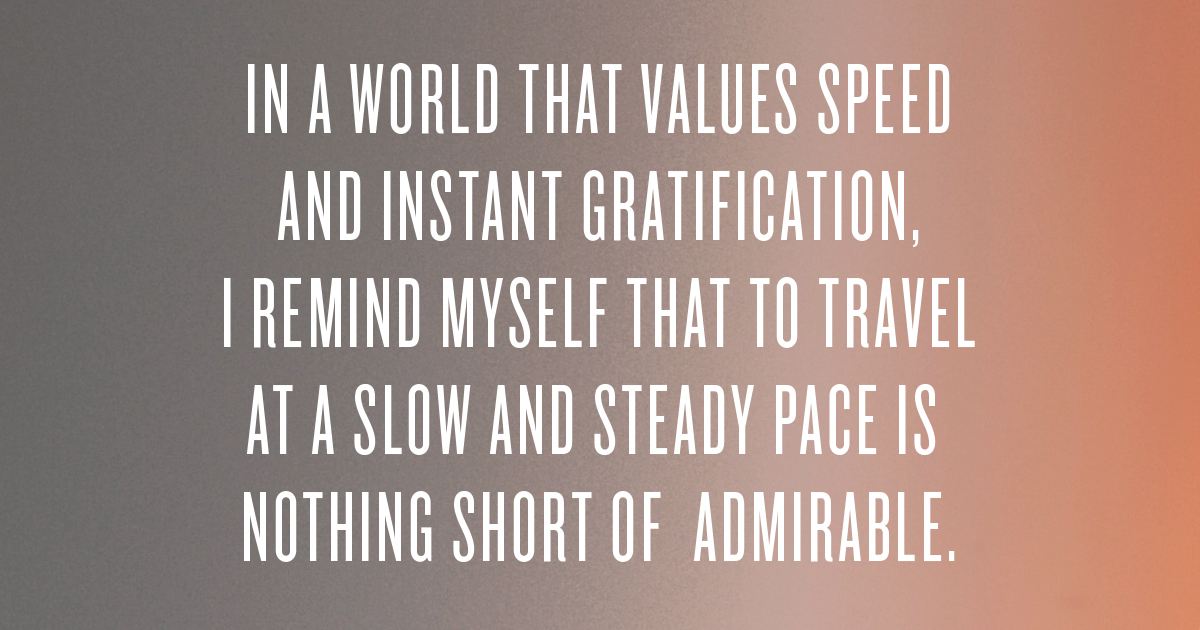