No one really wants to talk about suicide. As a result, so many of us are ill-informed and confused. I don’t have answers for how to process your loved one’s suicide. But I can share the thoughts and feelings I’ve wrestled with and maybe, just maybe, you won’t feel so alone in your grief.

My brother died by suicide on January 4, 2019. I honestly think I knew it was coming—he was addicted to painkillers, lied regularly, experienced noticeable mood swings; he struggled to hold down a job, his marriage was unstable, he kept his friends in the dark. All signs of an erratic, hurting, lost person.

I did my best to be there for Eric. I’d remind him that I loved him, believed in him, missed him, and knew he could get better. Sometimes, I’d call him out or push him to get help. Other times, I had to ignore his calls or ask someone else to respond because he was in a dark place and I wouldn’t be able to reach him. I knew that I couldn’t fix him while he was alive. But now that he’s gone, I feel like I should have. I feel like I failed him somehow. Like I just didn’t do enough.

Suicide is so unfair because you typically have no closure. So many things are left unsaid because, well, we think we’ll have more time. And that’s only logical, right? We don’t plan for sudden death—it’s a morbid way to live. But this is why suicide is so hard to comprehend – our loved ones are making the biggest decisions of their lives and not discussing any of the consequences with us. So, our subconscious turns on us and tells us we’re to blame.

We start to see the one who’s gone as the victim; ourselves as the traitor. We could have prevented this. We did this. There’s no way this was their decision. They could not have wanted to truly die. In the beginning, we can only remember the bad stuff we did. We aren’t thinking of all the ways we dropped everything to listen for hours. Or the times we rearranged our schedules to be with them. Or the moments when we were told we were the only ones keeping them alive. No, we focus on the negative because obviously the positive wasn’t enough or they’d still be with us.

Suicide loss makes you feel guilty. We have to set boundaries at times, but those boundaries can be misinterpreted as rejection and abandonment. I tried to take every one of Eric’s phone calls. But sometimes, for the sake of my mental health and my family’s well-being, I just couldn’t. My counselor would remind me over and over that I couldn’t give Eric what I needed to give to my family. In other words, if I allowed Eric to drain me emotionally, physically, spiritually, and mentally, I would not have any margin for those who needed me at home as well. Eric had resources, he had counselors and friends and rehabilitation centers that he could access. The help was there. But often, he instead sought out an outlet and target for his anger. When the heaviness and negativity hit my threshold, I implemented boundaries. Boundaries that I would later second guess.

Kay Warren, who lost her son to suicide years ago, explains, “Mental illness puts families in these untenable situations in which you don’t have any good choices.”

I remember asking my counselor:

“What if I put up these boundaries and he kills himself?”

My counselor answered, “Then he does and it’s not on you.” Seems simple, but gosh, is that hard to believe when you’ve been present for every other crisis and weren’t there then. But the truth is, survivors of suicide loss are not responsible for the suicide itself but we are, in every way imaginable, impacted by the aftermath.

I remember sitting on my back porch sobbing because I ached for my brother and the dysfunction that plagued him to take his own life. My heart broke because I know his pain better than most. I, myself, have contemplated suicide many times. But I chose to live. Eric chose differently. It’s OK to feel betrayed, hurt, abandoned, rejected, angry. Someone you love is gone, someone you love made the decision to leave, and it just plain sucks. Give yourself the grace and freedom to feel whatever it is you might be feeling. 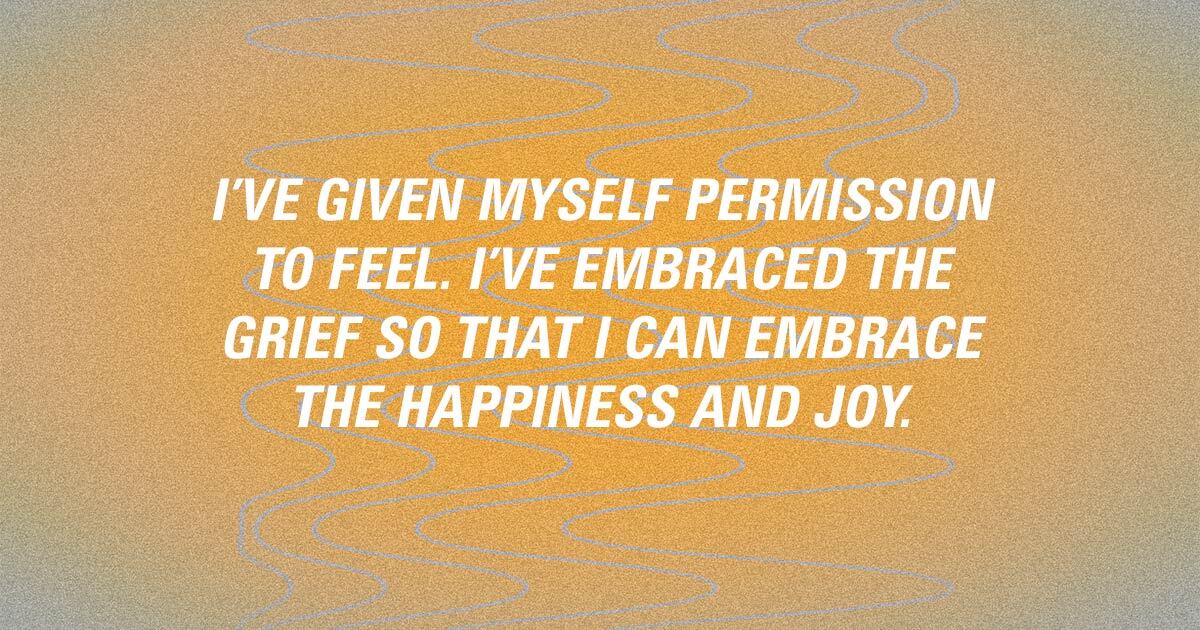 I want to be angry at a disease, a car accident, something. My mother-in-law, with whom I was very close, passed away a few months after Eric from Alzheimer’s Disease. My mourning for her was so different from my mourning for Eric. Though heartbroken she was gone, I was relieved her struggle and pain were over. When Eric died, I tried to tell myself that I was happy that his struggle and pain were over. I told people I was so glad that he was now whole, in peace. But I was lying because I was just plain mad.

Fortunately, the emotions get easier to live with over time. But they do come in waves and you have to be willing to ride those waves. I used to be terrified of my grief. I saw it as not a gentle wave, but one that could easily overtake me, and if I gave in and felt it, I’d never recover. So for several months after my brother died, I kept it all at bay. In order not to feel any grief, I had to also numb myself from experiencing anything—even joy, happiness, peace. We can’t pick and choose what emotions we feel. We are either feeling all of them or none of them. Maybe that numbness was a form of self-protection and survival.

I wonder how many of you can relate? You’ve walked through a season of loss and you are terrified to process it… You feel like you don’t have the strength, the energy, the ability, the stamina to approach the grief. And so you’ve turned off your emotions like you turn off a faucet because you know how finicky grief is and how it can be triggered by not only sadness but also happiness. You are a shell of a person and your family and friends miss you…are concerned for you. But what other choice do you have?

There’s something I can promise you and attest to: stuffed emotions will ultimately erupt… and it won’t be pretty. They make you anxious, depressed, suicidal, angry, self-sabotaging, self-medicating, addictive, and on and on.

So, here’s what I did: I learned to surf. No, not literal waves, but I have learned how to surf emotional waves. I’ve given myself permission to feel. I’ve embraced the grief so that I can embrace the happiness and joy. If a song comes on that reminds me of my brother, I don’t turn it off, I don’t distance myself from the memories, I don’t bury the sadness. I feel. I let myself be sad. I cry. I talk about it with my husband and close friends. I enter into the emotion and ride its wave. By doing this, I reduce the intensity of the next wave.

The waves that involve memories are unique. They can at times highlight the ache and the pain of forever, but they also help me keep that person close. Sometimes they even bring about laughter. And goodness do we need to laugh and enjoy. Because while your loved one may be gone, you are still here, choosing to live. So really live, in honor of them and in honor of yourself.

You are strong enough to heal from the heavy you carry. We encourage you to use TWLOHA’s FIND HELP Tool to locate professional help and to read more stories like this one here. If you reside outside of the US, please browse our growing International Resources database. You can also text TWLOHA to 741741 to be connected for free, 24/7 to a trained Crisis Text Line counselor. If it’s encouragement or a listening ear that you need, email our team at info@twloha.com.

Suicide. Let’s talk about it.

This piece talks about suicide. Please use your discretion.  You can also listen to it here. The intro. I’ve participated in TWLOHA’s annual suicide prevention fundraising campaign for many years now. It’s become something that I consider a regular part of my routine—an expected, dependable undertaking that I associate with this time of year. I […]

Dear NCAA: Now Is the Time To Make a Change

It is about 10 pm on a Monday evening. I am laying in bed with my dog reading article after article about the recent deaths by suicide amongst college athletes. Sadness has found its way into my bones, creating chills, stomach clenches, tears, and numbness. It hits me to my core because I see myself […]