You are right.
Correct.
Valid.

Your experiences are authentic and true and real.

But it’s not surprising if you don’t feel this way.

There is tremendous pressure on those of us who struggle with our mental health to live up to certain expectations. To make choices that are the correct ones, that have worked well for someone else. We’re told that certain renderings of depression or anxiety on television or in movies or books “get it right.”

It’s true that some pop culture representations of mental illness are stronger than others and some are downright dangerous. You can’t be “a little OCD” about something, for instance— unless, of course, you’re diagnosed with Obsessive Compulsive Disorder and it’s a painful reality of your existence, rather than a personality quirk that desires cleanliness and organization. But by labeling some depictions of mental illness as “getting it right,” those depictions which don’t match are, by default, “wrong.”

So what if you don’t see yourself in those “right” depictions? What if, among lists and lists of media that “get it right” when it comes to depression or anxiety or borderline personality disorder, you never see yourself? How easy it is to then believe everything you experience is a lie.

This feeling of your own experiences being thrown into question has a couple of names. The first is gaslighting. The second, impostor syndrome.

Gaslighting is psychological manipulation. It’s done purposefully, with the intent to force you to question your instincts and your memory. It’s also a form of abuse. For those who struggle with mental illness, gaslighting may look like this: an individual in your life will tell you, repeatedly, that your belief in being unwell is not true. They may tell you you’ve been reading too many books or spending too much time perusing blogs—like this one!—and you’ve been misled to believe there’s something wrong with you.

Those who gaslight may also manipulate you into believing everything you’ve done, whether or not you’re sick, is the result of your mental illness. A boss might bring up the fact you’ve been underperforming at work as a symptom of your depression when it may have nothing to do with your mental health at all. It may also take the form of a partner using your mental illness as a tool during an argument, suggesting that you’re only upset about a situation because your anxiety has been really high lately and that your anger has no real basis. This isn’t to say that sometimes an argument may emerge because of high anxiety, but it is to say that your mental illness is used as a sledgehammer against you by the person you’re disagreeing with.

Impostor syndrome, unlike gaslighting, comes from within. It’s not a form of abuse, and while it’s often associated with doubting your accomplishments and achievements, downplaying them as “luck” rather than talent or hard work, it can also work in reverse. Impostor syndrome may tell you that your experiences with mental illness aren’t really that bad. That that depressive spell or wave of anxious tension isn’t real.

It may, unlike gaslighting, convince you that your actions are entirely of your rational mind and that no mental health challenges would ever impede on your normal behavior. That your spell of days not wanting to get out of bed are simply because you’re really tired, rather than being a symptom of depression wreaking exhaustion over your entire being.

And it’s impostor syndrome which allows the idea of “getting it right” to have an opposite reaction: it can set up an unreal expectation of what is and is not expected of someone experiencing mental illness.

I’ve spent much of my life reading and absorbing movies and television about mental health. I majored in psychology in college, focusing specifically on mental health and teenagers. But never—not once—did I see myself in any depiction of depression or anxiety I read or watched. I’d scan lists of books that “got it right,” but never did I see the similarities that should have encouraged me to get help.

Because my own experiences—sleeping for most of the day, working out to excessive amounts in order to combat being sad with endorphins, eating a dangerously low-calorie and low-protein diet in order to lose weight because that might help me calm down—those weren’t symptoms I saw. This is, of course, because they’re boring. They don’t tell a captivating story or advance a narrative to new heights. They aren’t splashy nor sexy. They aren’t the kinds of things that make for media anyone would want to consume.

But by never seeing those things on the side of “getting it right,” I was led to believe that my experiences were wrong fits for depression. Were wrong fits for anxiety. My suicide ideation was a figment of my imagination, rather than a lived reality.

I wasn’t doing it right.

It didn’t stop there, though. Even when I found the courage to seek help, to see a doctor and talk about my experiences, I found myself wondering if my experiences with management were invalid, too. I’d read so much information about how hard it can be to find a way to manage depression and anxiety, that when I found medication that did the trick on the first try, it didn’t seem right. And then, eight months later when I found myself relapsing into old patterns, I had a hard time asking for a higher dosage because it had worked for a while and, well, why wouldn’t it continue to work? I was an impostor, and my depression was gaslighting me.

There is tremendous pressure to be a “good” crazy. To match the criteria, to see yourself in the depictions from books or television. To follow the straight line of recovery, as if it’s that easy. As if it’s a straight line at all.

But the truth of the matter is this: there is not a single way to experience your own mental health. It’s a continuum and it’s ever changing. Any questioning, any insecurity you feel about your mind doesn’t belong to you—they belong to a culture obsessed with correctness and neatness. With needing to showcase “getting it right,” as opposed to rolling around in the messy reality. Everyone has a brain, and every one is different. A depiction of mental health that “gets it right” for one person doesn’t mean that it “gets it right” for someone else. It’s only by broadening the conversation and talking, too, about the tools used to suppress experiences that don’t fit neatly in the category of “getting it right” that we can better empower those who struggle. The more voices we hear, the more we see how diverse mental health experiences truly are.

Your experiences are authentic and true and real.

Valid.
Correct.
You are right.

We need your voice, too. 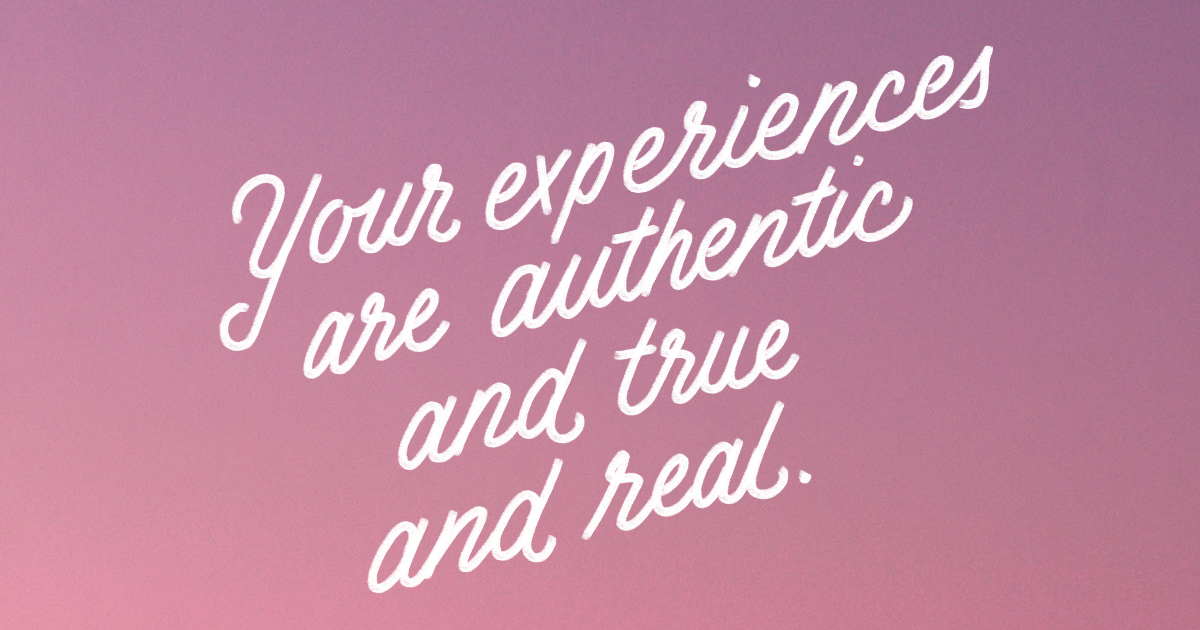