Anyone who knows me knows that I’m a huge fan of Tom DeLonge, frontman of Angels & Airwaves, co-founder of To The Stars Academy of Arts & Science, and formerly a member of blink-182. He is my favorite person for a few reasons:

When I was 18 years old, I attempted suicide. My life has never been particularly hard. Sure, I didn’t grow up rich, I was bullied like a lot of other kids, I was never the smartest or the prettiest, but my life was mostly fine. But amidst that “mostly fine” existence, I did, however, deal with Major Depressive Disorder.

On November 10, 2009, I woke up earlier than normal and my sister was still asleep. My alarm wasn’t due to go off for another few hours, but I woke up and my immediate first thought was, “This is it. This is the day.” I don’t know what made that day different, but it was.

I didn’t go to bed deciding the next day was going to be my last. I didn’t text my mom to tell her I loved her. I didn’t leave a note for my sister. I didn’t tie up any loose ends. I just didn’t.

Instead, I got out of bed, changed into my favorite pink, blink-182 shirt, grabbed my shower caddy and my iPod, and went across the hall to the bathroom. I can’t say why I decided that the best place to die was going to be the nasty community bathroom, but I’ve probably made weirder choices in life, so I guess it’s irrelevant. There were four shower stalls in the bathroom with ugly, vinyl, yellow curtains that looked like they hadn’t been cleaned in so long that they were about to grow legs and walk out. I picked the stall all the way at the end because it was the only one that was a bit larger than the others. Not that it mattered. How much space does a person really need to die? Probably not a lot. I acted as if nothing was astray. I did the things I normally would: I hung up my towel, turned on the water, and popped in my headphones with my music on shuffle.

I have never been a religious person. I always wanted to believe that there was Something (with a capital “S”) out there as a way of giving my life more of a purpose than simply existing just to exist—but the most I can say is that I believe in signs from the universe. And I got one that morning.

I had thousands of songs on my iPod and putting it on shuffle meant an array of possibilities.

Of all the songs, it was “Heaven” by Angels & Airwaves that played. And out of that almost seven-minute-long song, “Please stay. Don’t go. I’ve got you now,” was the part being sung in my ears as I opened my eyes.

Some would call it just a coincidence, and maybe it was. But since I was a kid, Tom and his music have been playing a pivotal role in helping me through the dark times in my life, and here he was again, lighting a spark in me at the exact moment that I was choosing to give up.

It felt like the universe was telling me that I needed to stay.

I took the sign. I got up off the floor and I kept pushing forward. Because of Tom. Because of the universe. Because of me. That one lyric made me feel Something that I didn’t think I could feel anymore: hope.

Sometimes it isn’t a grandiose, life-altering thing that brings a person back from the brink. Sometimes it’s something as simple as a perfect song or a single lyric. Big or small, I learned that hope can and most likely will present itself however and whenever we need it.

And to Tom: thank you. 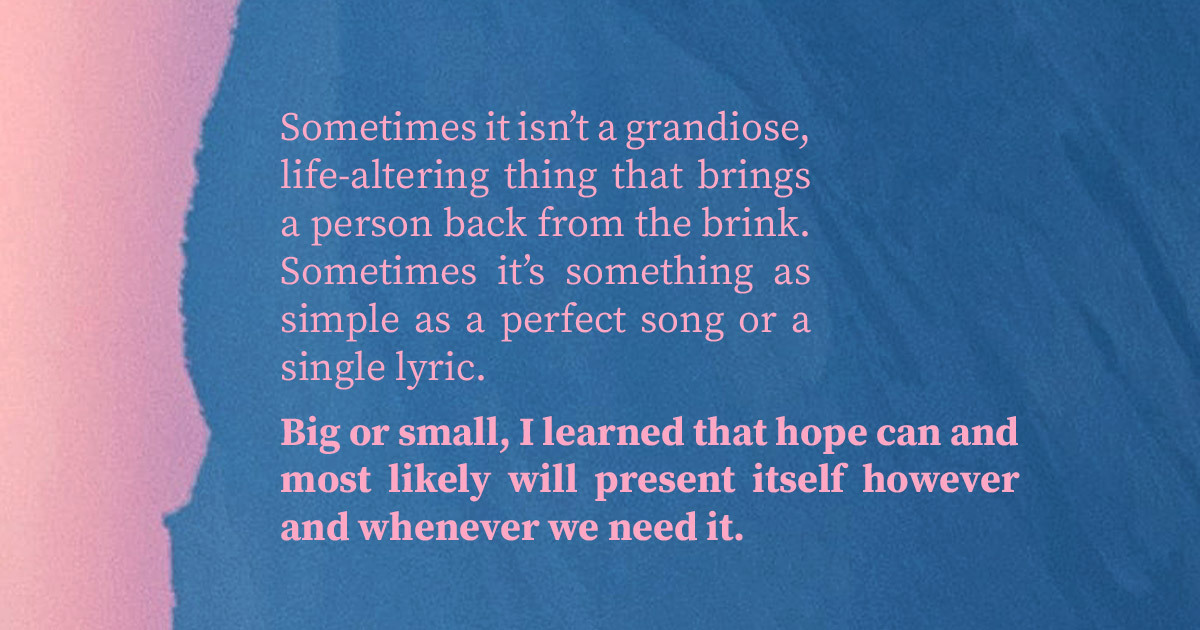 Whatever you are facing, there is always hope. And we will hold on to hope until you’re able to grasp it yourself. If you’re thinking about suicide, we encourage you to use TWLOHA’s FIND HELP Tool to locate professional help and to read more stories like this one here. If you reside outside of the US, please browse our growing International Resources database. You can also text TWLOHA to 741741 to be connected for free, 24/7 to a trained Crisis Text Line counselor.