It wasn’t until my junior year of high school, following a two-year long relationship with a boy, that I finally admitted to myself that I was attracted to girls. I was achingly in love with one of my best friends and had been since freshman year. I fell asleep most nights hoping that maybe in some dream world she’d confess she felt the same.

Our friendship ended abruptly before our senior year, uncannily shortly after the first and last time we stayed the night in the same place, falling asleep watching Gilmore Girls. Losing her later broke my heart—not just because her friendship meant so much to me, but because it was the first time I lost my love for someone I had finally given myself permission to feel something real for. The anxiety and confusion I felt were nerve-wracking. I didn’t know if it was “okay” to have feelings for girls. Everything in the world around me encouraged the internalized message that it wasn’t okay. As I  grappled with the idea of being different, I was filled with a deep depression. The kind of depression that made me want to erase myself from existence.

Was there a word for what I was or what I felt, or more accurately, what I didn’t feel about men? I’d seen depictions of it in TV shows and movies, but for some reason, it felt dirty and dark. My favorite show growing up was Buffy the Vampire Slayer, where I first witnessed the love between Willow and Tara, one of the first lesbian couples to ever appear on TV. Their love was beautiful and felt more real to me than anything I’d seen before. But their relationship was often tumultuous and ended tragically with Tara’s death—which signaled to me that queer women ultimately end up unhappy and torn apart.

Though I didn’t quite know what it meant to be queer, a deep fear settled in the pit of my stomach, that maybe I wasn’t normal. Maybe the key to happiness was convincing myself I liked boys. Because maybe that would fix me. Because maybe I could change myself. And then I would be less bad. Less depressed. Less wrong.

So I dated boys. I slept with boys. I kissed boys in the backseats of cars I didn’t want to be in. I desperately wanted to believe that someday I would truly like a boy, and he would want me, and I would be cured of the sick gut feeling that had made a home inside me.

Farther into my senior year, I would come out for the first time, and it would hurt like hell. But not because I couldn’t accept myself, but because others couldn’t. I sat on the brick wall outside my apartment building with one of my best friends in the warm California breeze. “Why didn’t you kiss her on the Fourth of July when she dared you to dare her to kiss someone?” he asked me, referring to a video of our friends playing a game of Truth or Dare.

“Because it would have meant something to me. And it wouldn’t have meant the same thing to her,” I told him quietly. He reacted by laughing and joking about always knowing I was “a little bit gay.” And then, he called me the “f” word. To him it was a joke; it was a word he used with friends all the time. But to me, it was a gut punch—making me wonder if I should have just stayed buried a little longer.

When other friends found out, their reactions were similar. My sexuality was a punchline. They acted like it was something for attention, or a sign of deep-seated issues: my worst fear.

It’s taken me years to proudly and loudly declare I’m queer. To date people I’m genuinely attracted to. To kiss people I like. To finally allow myself the permission to love who I want. But I’m here.

If I could go back and talk to my younger self who buried her queerness, who felt so much pain and distress over who she was, I would tell her it’s okay to be confused. It’s okay to have questions. It’s okay to not really know who you are. Give it time. Someday you’ll sink into your own skin the way you’ve always dreamed of. Someday you’ll kiss a girl and take her breath away. Someday you’ll write poetry verses out of bouquets of words that a girl has given you. Someday you’ll say it out loud and throw yourself into an un-manufactured bliss. You’ll tell someone about the love in your heart that has always been there, and not feel ashamed. It won’t always be okay, but it will be real. 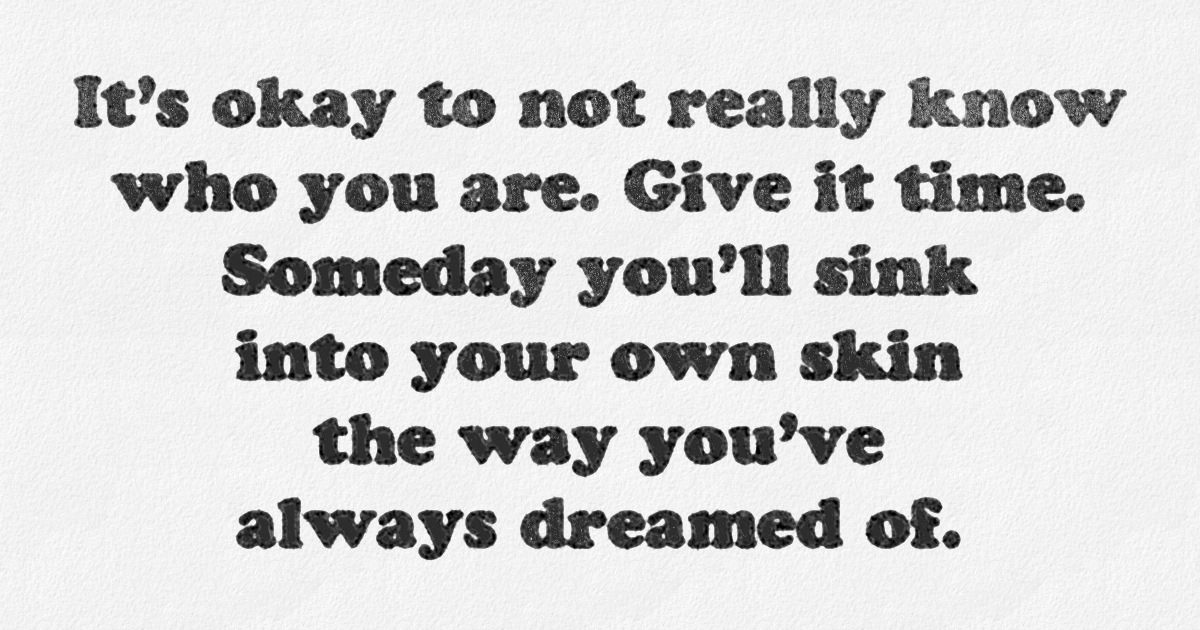