This piece was originally published on Medium here. We’re sharing with full permission from the author. Please note that some of the situations mentioned and the language used may be triggering.

For most of my life, I’ve controlled my feelings with medicine. Every day I take something to quiet my anxiety, stabilize my moods, and lessen the effects of my OCD.

And I’ve really tried to make these pills a solution for the unmanageable mass of emotions swirling about me like an impending tornado.

The results? Not so stellar.

As a teacher, I’ll award my pharmaceuticals a “C.” They’ve kept me from heading off ledges, breaking into fits of anger, or just breaking down in general.

But they didn’t manage to keep me happy. And each time the doctors prescribed these medicines, they asked me if I had considered therapy.

To which the answer was always, “Nope.”

I’m an extreme introvert — one who doesn’t even talk to my family about what’s bothering me.

And in my mind, I couldn’t imagine talking to a complete stranger who’s making money off me while I whine like a baby. Who’s judging me while I expose ugly thoughts that run marathons through my head. Or who’s rolling their internal eyes at me thinking, “I’ve heard this crap a thousand times before.”

And even though I know most therapists do what they do out of care and a desire to help, this was my internal monologue.

But sometimes, another person’s wisdom and courage break down our resistance to change. And the courageous and wise person who did this for me was my fourteen-year-old daughter.

Three months ago, she told me she wanted a therapist.

I thought it was a phase, so I waited a week. But another request came, and then another. She realized she was depressed, and she realized she needed help.

So I got it for her.

And I remember thinking to myself how brave that was, how much self-awareness it took for my little girl to realize she couldn’t fight her demons alone.

I was so proud of her and so angry with myself at the same time.

All these huge steps she was taking to fight for her happiness while I played cowgirl, corralling my emotions and forcing them into a pad-locked stable with a huge “do not enter” sign posted on the door.

And in the two months she’s been seeing this therapist, the change in her has been tremendous.

I’m seeing a marked decrease in anger and a beautiful increase in smiles. Most importantly, she seems free of some darkness to which I am not privy (I promise her what she says to the therapist is for their ears only).

And part of me wanted, needed that sense of peace.

This was when I considered that maybe I could be as brave as my daughter, that perhaps I could let go of my preconceived notions and give therapy a try.

And I just made this decision a week ago, so I’ve not yet seen a therapist or even made an appointment.

But one thing’s for certain.

I’ve made up my mind.

And it wasn’t just my daughter’s experience that led to this decision. 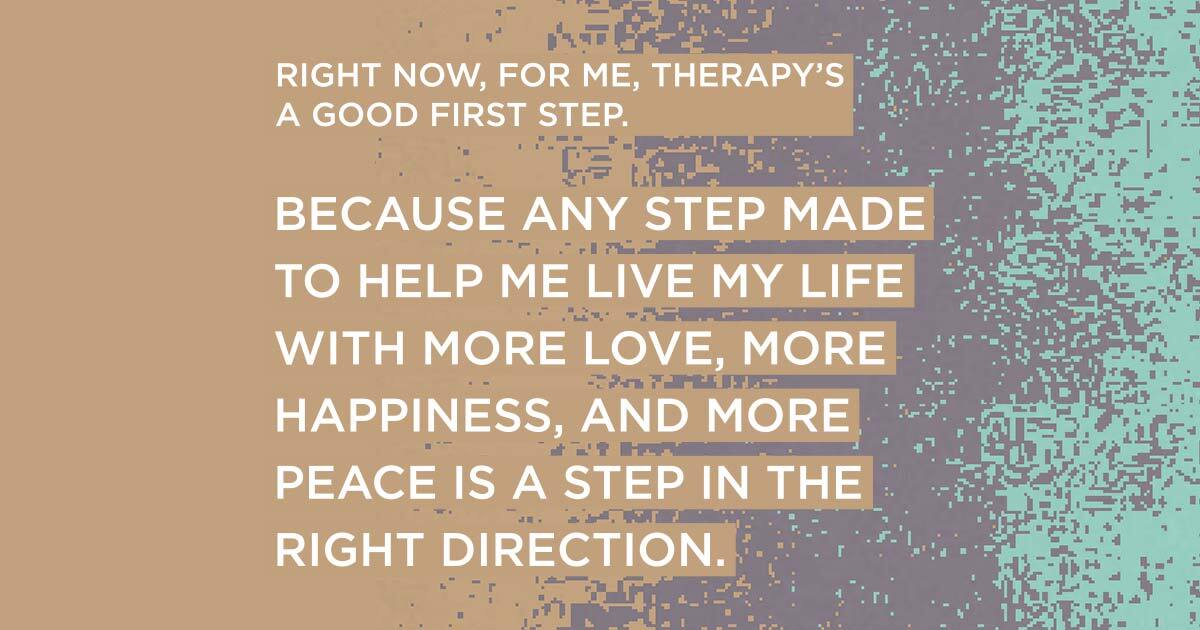 The factors that made me decide I’m going to give therapy a try:

I knew holding in my emotions was killing me.

I told you I’m intensely private, so I’m not ready just quite yet to spill the beans to an audience about what monsters run through my head.

I will tell you that at forty-eight, a mid-life crisis is brewing. But even before that, the years have kept dropping “uglies” onto my mental landscape.

And it’s a madhouse in there.

New uglies pop up, like the scenery, and decide to party with old uglies that have set up camp.

And all this chaos, all this roaring in my head, is becoming so loud it’s all I can hear.

It’s kind of like a party where you’ve had too much to drink. The room is spinning. The bile is burning your esophagus, and all you can think about is sticking your finger down your throat so you can vomit and stop the suffering.

That’s how I feel.

I want to let go. I want to release all the negative feelings, pent-up resentments, and unresolved issues of my past to someone. And I want to do it without sugar-coating my stories or apologizing for them.

I want to feel that free.

And even though I know I’m going to feel uncomfortable at first, I want that freedom so desperately I’m willing to take the risk.

As a matter of fact, one of my favorite poems (appropriately named “Risk”) perfectly expresses the point I’ve now reached in my life.

“And then the day came when the risk to remain tight in a bud was more painful than the risk it took to blossom.”

That day came for me. I realized I was ready to bloom. Or at least ready to give myself permission to try.

I knew I needed someone to make me face my feelings.

Those uglies I told you about? The ones that decided to make my mind a twenty-four-hour disco?

In the bigger scheme of things, these boys are obnoxious but manageable.

But there are some uglies so ugly and so scary I choose not to see them. I also close my ears to their whisperings. Because I know these bullies are playing with the big guns. They are the real issues behind my actions and thoughts. The real monsters I struggle with all my might to ignore.

And I know I need someone to drag these guys out of hiding and force me to face them one by one. I also know that until this happens, I’ll continue to put band-aids on my problems when they really need surgery.

And I want to be done with my wounds. I don’t want to simply treat the symptoms. I want to cure the disease.

But the truth is, I need someone to hold my hand along the way.

I knew I needed a completely unbiased point of view.

The part that always put me off about therapy was the whole stranger thing. These people don’t know me. They don’t know the specifics of who and what I deal with on a daily basis.

They don’t see me rolled into a ball in my bedroom because of a panic attack so bad I thought my heart would burst out of my chest.

They don’t see the way so and so treated me. They don’t get a chance to look into that person’s eyes or hear the sound of that person’s voice when I tell them about my relationships.

They don’t see how sometimes I walk into a room and vanish into thin air, and they don’t see the faces of those people who have the power to make me invisible.

But the more I thought about those facts, the more I considered this might be just the type of person I need.

It’s kind of like when you get a bad haircut, and your friends tell you it looks great because they love you. I realized I need someone to tell me what I need to hear rather than what I want to hear.

Because that’s the only way out — to get another perspective on my problems.

After all, we see flaws in others far more than we see in ourselves. We see their missteps twice as much as we see our own. And I now understand I need a third-person narrative, an objective set of eyes that will help me look at myself and the part I play in my own struggles.

I knew if I didn’t address my issues, my problems were only going to get worse.

“I’m the type to ignore a pebble in my boot until it gives me a blister. I’ve made ignoring problems an art form.”

I’ve spent decades, literally decades praying that some of my issues would just disappear.

Well, guess what? I’m staring at them as we speak.

And I know in my heart that the longer I do nothing, the worse the problems will get.

Dust accumulates if you don’t clean. Trash begins to smell the longer you leave it indoors. And the parts of me that are threadbare will continue to unravel until I do something about it.

So, I’ve decided to accept that fact of life and see what good things can happen when I grab a needle and some thread.

Therapy is a personal choice. There’s no one size fits all way to deal with your problems. But if you are toying with the idea of talking to someone, here’s something to think about.

And looking at this list only reinforces my feeling that I’m making a good decision by deciding to seek help.

That maybe I’ll get a taste of that same tranquility that’s beginning to glow in my daughter’s eyes.

And right now, for me, therapy’s a good first step. Because any step made to help me live my life with more love, more happiness, and more peace is a step in the right direction.

And it’s much, much better than standing in the street waiting to be run over by my own car.

Which is what I’ve spent my whole life doing.

This piece was written by Dawn Bevier. Dawn is a teacher, thinker, learner, and writer.