I am not a runner. As a child, I would often say “I’d rather XYZ than run one mile.” Why the disdain? Because I was born with Cerebral Palsy, which for me, affected my right leg, causing it to be shorter than my left. And in turn, made running or even walking just a little bit harder. Growing up, my dad would take me to Penn State Children’s Hospital in Hershey, Pennsylvania, for check-ups and braces to try and correct the CP as I grew. Being a little kid I knew nothing else, this was my normal.

As I entered school these once “normal” braces started to bother me, the plastic would physically hurt when I tried to run and keep up with others on the playground. And mentally these braces took a toll as jokes ensued and being picked last came into my schoolyard landscape. I tried to explain it away, push it aside, and ignore it. I tried to play soccer and do all the things most kids would do—I was just always a little bit behind. Always being “just a little behind” led to feelings of “I’m not good enough to make the team” or “I am not good enough” in general.

By the time I entered middle school, my self-worth had deteriorated to an all-time low. As more challenging situations arose, the lie that I was inadequate gained traction, to the point of depression and near suicide. When I would randomly trip on the sidewalk or on the way to class because of my CP, a voice surfaced, shouting, “you’re not good enough.” Fortunately, I found a community of hope through TWLOHA (on Myspace) that kept me going.

Fast forward to the beginning of 2019, I made the decision to start going to the gym after signing up for TWLOHA’s 7th Annual Run For It 5k in April. I figured even though I hated running this would be for something I cared deeply in and a goal that I could aim for to offset the early-morning-gym-visit dread. After a few months of training, race day came and a friend joined me at a local park. She grew up running so I expected her to blow past me, but a mile in I realized I was pulling away from her. And when we crossed the “finish line” I discovered I was about a minute ahead. As she congratulated me, I started to wonder: Can I go even further? Can I silence the voice and lie indefinitely?

The rest of 2019, I continued to run, leaving the treadmill for the outdoors. I signed up for more races, increasing in distance and looking for bigger goals. So when my sister asked me to participate alongside her in a half-marathon race in Hershey, I said yes. Running was becoming a place of mental solace, a place that I could go to when emotions were high or days were tough.

As I train for the half-marathon, I silence the lie, the voice, with every footstep forward. 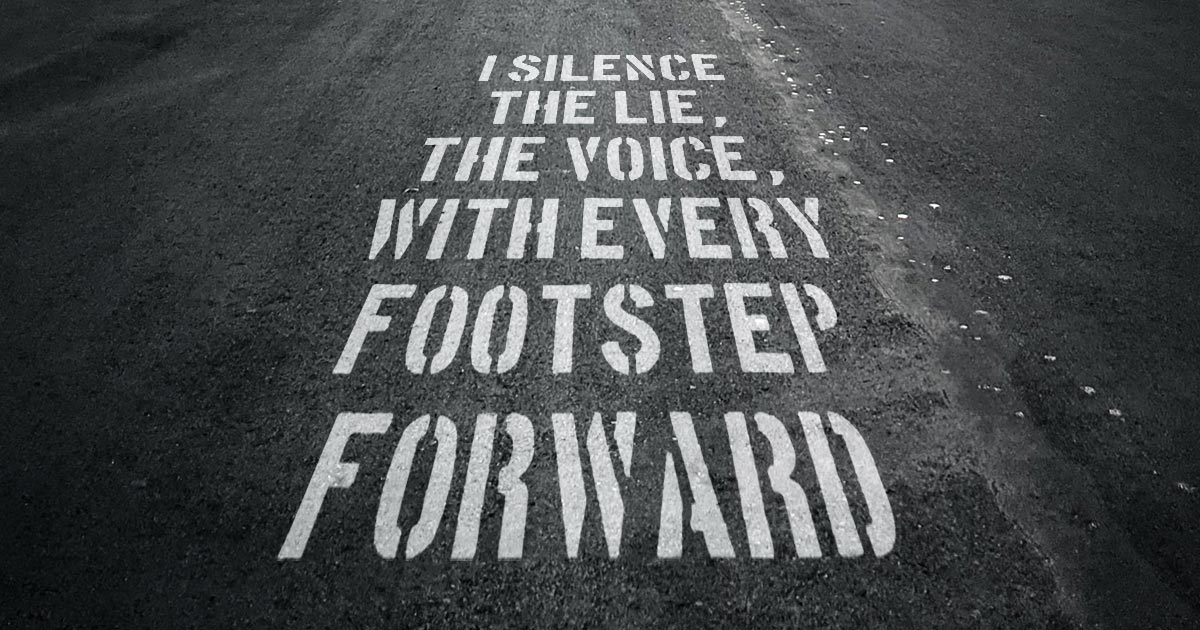 The morning of the half my emotions are high, but deep down the lie is pestering me and I drift into the mindset of “not good enough.” But the horn blows and we’re off. As I come around the first corner, I see my parents, particularly my dad. The man who brought me to this same town as a kid for check-ups and braces. I almost break down crying not even a mile in. I want to finish though, not just for my own health but to say thanks to my dad, to my parents for their sacrifices, and to crush this lie for good.

Under two hours later I crossed the finish line, exhausted, but accomplished. I found my sister as she finished a few minutes behind me, saying she’s done with running and that this accomplishment was sufficient for her. We take pictures, celebrate, and go to leave. But my mind continues to churn with a new question: Is a full marathon possible?

It’s now 2020 and I have two full marathons on my calendar. While I haven’t gone that distance yet (20mi is my current PR as I write this), I can now say that I love running. Running has provided me with the space to heal and process. It’s connected me to the God that I believe in, in new ways, and has given me the energy to show up for my community with a healthier mindset and higher self-worth and view of myself than ever before.

So maybe the very thing that once caused you pain may be the key to your healing, like my legs and CP were for me. Maybe it’s running, working out, or something else. But my prayer and hope is that you find what you need in your own race, whatever that may look like. Regardless of pace, I know you can reach your finish line.

We hope you’ll join us and Eryin on May 16, 2020, for the 8th Annual Run For It 5k—a now fully virtual race. No matter your pace, we believe forward is forward. Get all the details at RunForIt5k.com.