I was taught to hate my body before I learned to love it.

I spent the first 14 years of my life hiding, experiencing pain in secret, taking in all the subtle and not-so-subtle lessons from society and family on which bodies hold value, and which don’t.

In middle school P.E., I was introduced to consistent exercise for the first time. Unfortunately, I was also introduced to Tumblr, and the online communities that celebrate self-harm and anorexia, at the same time.

Instead of learning how movement was beneficial to my mental and physical health, I ended up learning how to push past healthy limits, and how to use exercise and food restriction to reach unhealthy goals—all while blending into the crowd and going unnoticed.

On a run, I would spend my 6- or 7-minute mile doing nothing but tearing myself down in my head, only to be met with validation and cheers from coaches and friends. A new record. What a thing to be proud of.

During lunch, I would focus my energy on being, or at least appearing, social and present. 30 minutes would go by, and no one seemed to notice that all I had done was slice a single banana into tiny pieces.

The strangest thing about this chapter was that I knew what I was doing was wrong and unhealthy. Not only was I killing myself, but I knew that I was. And I was choosing to keep going anyway. The value I placed on achieving the impossible was higher than the value I placed on my own life.

I reached a point where I desperately needed help. I found the courage to ask for it and the words to express it through TWLOHA. I found I was not the only one feeling these things and struggling to find the language to communicate. At 14, I talked to my high school counselor.

I wish I could say my struggle ended there. That I received help and life got better. While there is truth in that sentence, telling someone about my eating disorder was just the beginning of a very different season. A season that, even eight years later, is not over.

At the start of my recovery journey, I found exercise to be incredibly triggering. To protect myself from it, I made not exercising my identity. I was someone who never worked out. I turned my pain into a quirky trait and a joke. A joke that everyone around me knew. A joke that offered some semblance of safety.

Unfortunately, that perceived safety turned into more of a cage. A cage that I had ultimately created, entered, and locked myself in. But even with this realization, the idea of breaking out and rebuilding my relationship with movement felt so embarrassing. I was afraid that after making a big deal about not moving, once I began moving it would shine a spotlight on everything I was struggling with. So I stayed in that cage, even though I wanted out.

I hesitated with telling this story, a story that doesn’t have a clear, easy-to-digest ending. At least not yet. My decision to share this “unfinished” experience is in hopes that anyone out there who is also in the middle of their hard thing might find comfort. In the midst of it all. So far from where you started but nowhere near where you want to end up. It’s hard being here. But I’m learning that the “middle” is not just something I can quickly work through and get past. Life happens in the middle. There are lessons to be learned and joy to be felt in this space—if you give yourself the grace to do so. 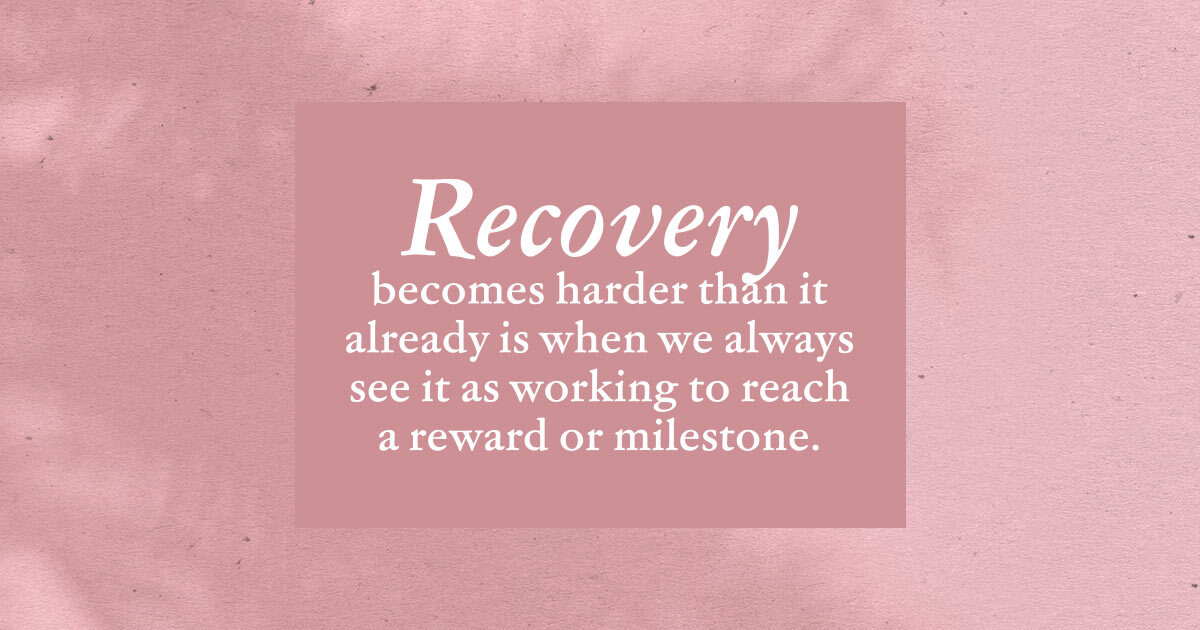 Recovery becomes harder than it already is when we always see it as working to reach a reward or milestone. I think I’ve finally accepted that I’m more likely to be “successful” in my recovery if I stop looking at it as a way to reach anything else. I want to reframe it as part of the ongoing journey of life. There are ups and downs, twists and turns.

Maybe recovery is just another way of saying: life continues on.

So here I am. In the middle. Continuing on. I don’t have a list of steps to follow, I just know that reintroducing movement into my life has been one of the best things I’ve done for my mental health.

I started slow—with stretches and short walks. The stretches turned into yoga, and the walks got much longer. I learned I love podcasts. I found new ways of enjoying my beach town. I put trust in my partner and joined in on his workouts. I learned I’m capable of much more than I thought I knew—but that I also still hate push-ups. But the urge to move doesn’t always come organically, so I’m learning to listen more closely and to be intentional about carving out time to even try.

To be clear, this reintroduction is happening in real-time. The mental and emotional side of my eating disorder remains something I carry with me every day. Into every situation. But encouraging exploration has led me to remember something that gives me so much hope: I still have yet to meet all of me.

I want to move forward with curiosity. I deserve the space to do so—regardless if I’m at the beginning, middle, or supposed end.

We believe caring for ourselves and others includes the whole self—the brain and the body. You’re invited to explore this dynamic through our Run For It 5k on April 23—an event where thousands run, roll, walk, ride, dance, swim, or move as a way to showcase just how much hope and help matter to them.

Don’t Let The Pot Boil Over

I felt as though I lost control of my life so I turned to a different aspect of my body that I could control—what I was eating.