Three years ago I was lying on a bed in an observation room at the Vanderbilt Psychiatric Hospital. I could not explain to them—or even to myself—what was happening, at least not in a way that made sense. This was just weeks after my 40th birthday, and in my head, it seemed like there was a crack in reality itself. And I’d fallen through. I was apart from the world. In it, but not of it. Maybe it sounds like a hallucinatory dreamlike experience, a kind of psychedelic adventure. It wasn’t. It was terrifying. And if the world itself didn’t feel real, the waves of panic that crashed over me certainly did. The need to escape was overwhelming, but the harder I struggled against this sense of unreality the more stuck in it I became. Was I going crazy? Was I dying? Was I even here at all? My thoughts spiraled, and I was being pulled under.

There is a word for this condition: Derealization. The psychiatrist I was sent to explained that when we suffer too much trauma or grief or anxiety or pain for too long our brain can, in effect, uncouple itself from reality as a sort of defense mechanism. I considered his diagnosis but struggled to name a culprit. I hadn’t really endured any trauma or extraordinary grief. I had never suffered abuse or been to war or lost a child. My condition seemed only to be a sign of my own weakness.

“Sometimes the source is internal,” he told me, “You don’t have to lose your livelihood or a loved one to suffer emotional trauma. You can lose your sense of identity, and your brain will grieve the same.”

He asked if there had been any changes in my life recently. I told him how, a few years before, I had closed my woodshop and had put away my guitars and musical ambitions, how I had taken an entry-level desk job in a glass-walled office building in downtown Nashville. We needed the money, but I soon learned I was an ill fit for computer work. Every day had become a dull facsimile of the one before. But these are the compromises adults must make, I told myself. This is the shape of responsibility. Then I turned 40, and the cost of that bargain I’d struck—time and artistic aspirations in exchange for financial stability—began to haunt me. The horizon didn’t look so far away as it once did. And the realization was crushing.

The psychiatrist nodded his head and described how the limbic system of the brain doesn’t differentiate between existential fears and the fear of, say… an attacking lion. It all registers as a threat. The brain reacts accordingly.

I am not a Catholic, but there is something about the saints that I find soothing. Maybe it’s knowing they were once ordinary people who gave their lives over to something more meaningful than themselves. Or maybe it’s the solemnity of their appearance in the icon artwork. Or maybe I’m just a sucker for symbology and history. When I learned about Saint Dymphna, the patron saint of those who suffer from nervous, emotional, and mental disorders, the anxious and the depressed, I embraced her as a sort of personal guardian. My private chaperone. 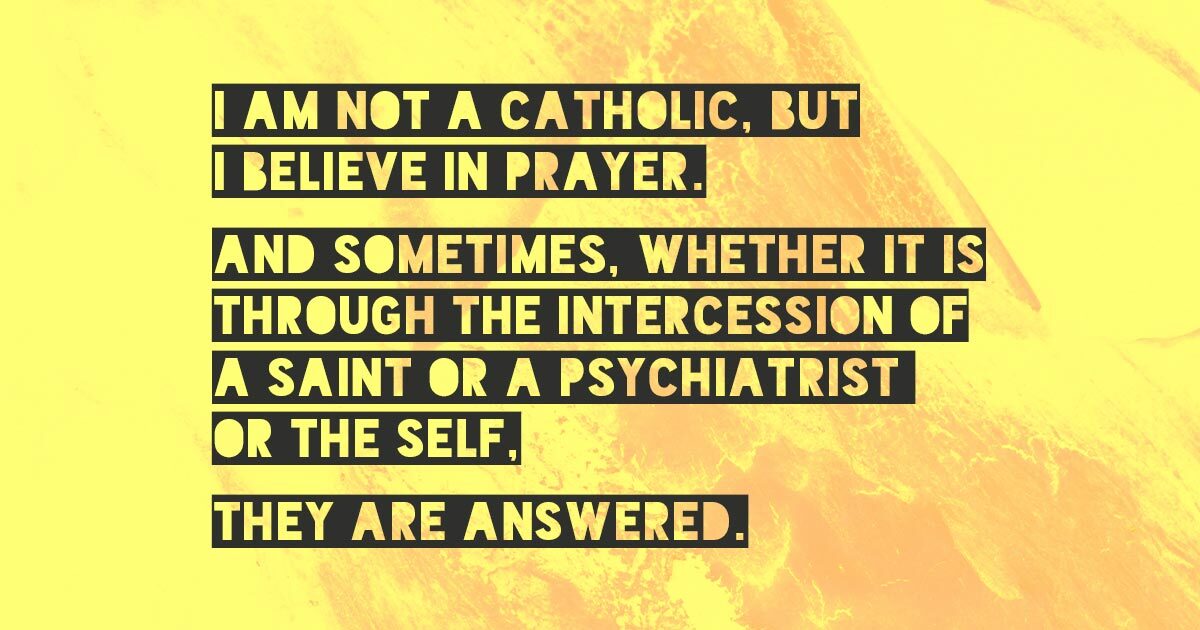 In the days following my stay at Vanderbilt, I started composing again for the first time in months. I wrote a song called Oh, Saint Dymphna while driving around Nashville in my truck. The next week I went into a studio to record what was supposed to be a demo of the song. The nearly constant anxiety I was struggling with left my body feeling weak and uncoordinated. I remember sitting on a stool trying to balance the guitar on my shaking knee. Ry, the engineer at the mixing board, rolled the tape. One take.

I walked into the control room, and Ry said, “That’s the take.”

Ry shook his head, “You’ll never sing it that way again. That’s the take. Trust me.”

Then he clicked the playback button, and my voice came wavering through the monitors, all imperfect and raw and vulnerable. Something like a prayer:

I can’t make the shoreline all alone;

I left the cubicle job a few short months later to reopen my woodshop. I finished recording the full record a few months after that. And while I still experience brief flickers of derealization in times of stress, the chronic sensation of being isolated in an unreality has, for the most part, dissipated. I am not a Catholic, but I believe in prayer. And sometimes, whether it is through the intercession of a saint or a psychiatrist or the self, they are answered.

Trapper Haskins is a musician, writer, and woodworker based in Thompson’s Station, Tennessee. Find him on Twitter and Instagram at @TrapperHaskins. For more of his work, visit TrapperHaskins.com.

The pain I feel is big and intertwined tightly with shame, guilt, and rage.

I was in therapy for fifteen weeks, called the crisis line six times, and made one attempt to stop the pain. But these numbers are not the ones that define my experience.

Reclaiming Ownership of My Story

Your brain has learned to equate yelling with violence, and your body has been trained to put up all defenses at the slightest sign of a raised voice, especially if that raised voice is paired with physical movement or close proximity.