While I was at dinner with two friends, the topic of mental illness and treatment arose. All three of us had openly struggled with both depression and anxiety, but our thoughts on treatment, particularly in regards to antidepressants, were vastly different.

“I wouldn’t go on them,” said the first friend.

“I would go on them, but just until I felt better,” said the second.

My take: Antidepressants are part of my livelihood.

I have been taking antidepressants on and off my entire life, and since deciding to take them consistently nearly three years ago, my life has turned around. I expect to be on them forever.

When it comes to medication, people’s opinions are often polarizing. Antidepressants are not for everyone; many people are fortunate to consider it a last resort, or don’t even suffer from mental illness at all.

For me, medication is a part of a more comprehensive treatment plan to avoid falling back into the throes of the major depression that I know always lingers beneath the surface of my delicately balanced equilibrium.

I remember what it feels like to be unwell.

For as far as my memory extends, I recall always feeling a haunting sadness, a darkness that seemed ever-present…

Of course, there were times when the depression was more prevalent than others, but—nevertheless—it was always there.

I compare the onset of a particularly heavy spell of depression to a thick fog that rolled through unexpectedly; it left me feeling weighed down and trapped, a hostage to my own mind.

I remember days, weeks, and months where it felt like I was separated from life by a sheet of plexiglas: I could see what was going on and (mostly) keep up with the world, but everything felt muffled and blurry. The worst depression is not sadness; it is numbness, a haunting apathy and hopelessness. When you fall to that place, it is nothing except empty darkness.

Though I could always feel it, my depression was not always easy to see from the outside. To a maniacal degree, I always pushed myself to excel.

I was high school valedictorian. I was class president. I had many friends. I graduated from Brown University. I held several jobs and showed up and did my work.

Perhaps, on paper, I don’t match the assumed image of what it looks like to have a mental illness.

Yet without a doubt, I know I have a mental illness.

I am not sad. I am not going through a phase that I will outgrow; I have major depressive disorder. No matter how happy I am, how many of my goals I achieve, I know I will always have depression. I do not mean that to be defeatist, I mean it to be pragmatic. My depression is manageable. If I take antidepressants, go to therapy, exercise and abstain from drugs and alcohol, then I am not only able to function, I am able to thrive.

But, on the flipside, if I do not pay attention to my mental health, if I do not do what I need to do, I am aware of where my emotional health can go.

I know because I have been there. I spent so many years denying that I was depressed. I spent so many years resisting therapy and medication. I believed they were punitive, or unnecessary. I thought it was unfair that I had to go through such measures to create a stable emotional baseline, where most of my friends just naturally found themselves there.

That period of my life was turbulent. It can be defined by suicide attempts and substance abuse; by eating disorders and emotionally paralyzing spells of depression; by dysfunctional relationships and general despair. I have had my life commandeered, and almost taken, by my mental illness.

Though I am not afraid to admit that I am mentally ill, I understand why people are: Mental illness is still stigmatized. Nationally, we mostly speak about mental illness in the wake of tragedies or “high-profile” deaths by suicide. And historically, when people suffered from mental illness, they were shipped off to devastating institutions. As a result, in today’s society, people might worry that they’d lose jobs, friendship or romantic relationships if they were honest about their mental health struggles.

But here’s the thing, mental illness is common: According to the National Alliance on Mental Illness, “One in 5 adults experiences a mental health condition every year. One in 17 lives with a serious mental illness such as schizophrenia or bipolar disorder.”

One of the worst parts of mental illness is this idea of isolation and silent suffering, the belief that your feelings and behaviors are wrong, that they must be hidden and denied.

The only way we are going to make this better is by having honest dialogues about what we, or our loved ones, need to be healthy.

Therapy and medication aren’t punishments, and they shouldn’t be luxuries either. For many people, they are necessary for survival—and certainly necessary for having a high quality of life.

It makes you a person with a unique set of challenges, but they involve obstacles that can be worked through, and–if not completely overcome—then at least managed. 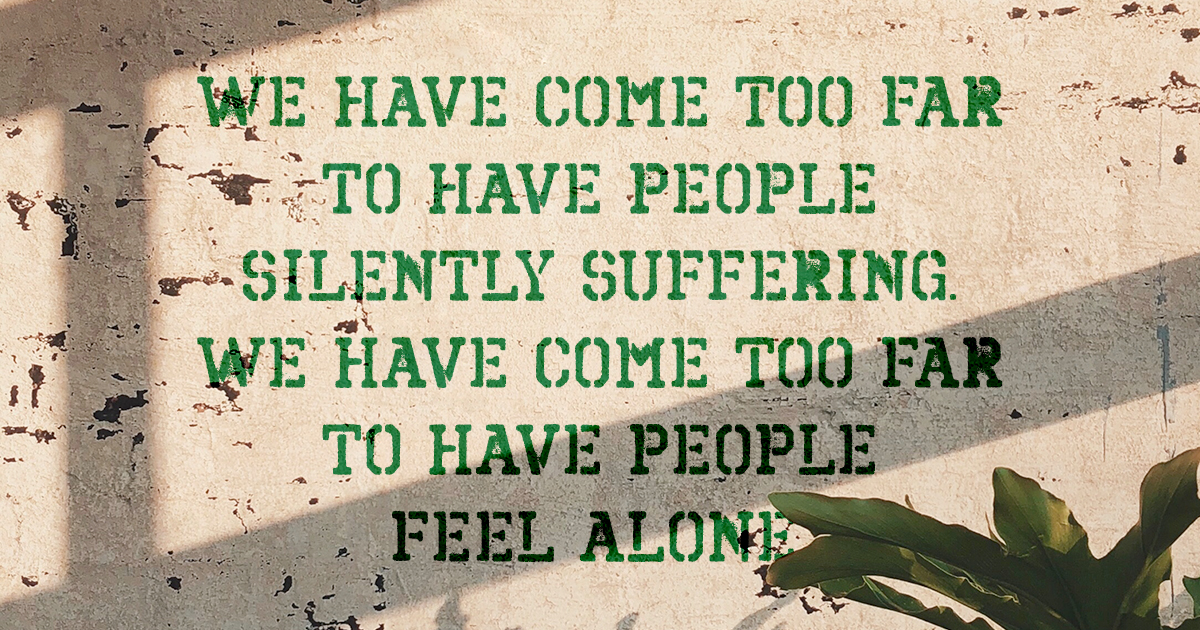 I hope conversations like the one I had with my friends becomes more common—that even if uncomfortable initially—mental illness becomes a conversation that can be had at a dinner table.

Change can only come once taboo is removed; progress can only be made once people feel comfortable being honest.

Have You Ever Stopped to Consider How Far You’ve Come?