Depression isn’t real, I was told.

I carried this belief with me for so long, hoping that if I just held onto it for long enough I could make it true.

Depression wasn’t real when I felt like I couldn’t get out of bed in the morning—that was just laziness.

But then why did I also cry because I so desperately wanted to be OK while having no energy at all?

Depression wasn’t real when I fell to the floor hysterically crying because I was suddenly overcome with the feeling of nothingness. That was just my being “dramatic.”

But then why was I trying to push away the physical pain that comes with not wanting to live?

Depression wasn’t real when I chose to injure my own skin, against every instinct of self-preservation, because the pain I felt in my lungs, on my chest, and in my mind was too much to feel without having a physical outlet for it.

Imagine having your courage and desire to live stripped away and replaced with the notion that you are no longer needed and the world would be better without you. Imagine someone saying the anguish you’re experiencing is something you made up. 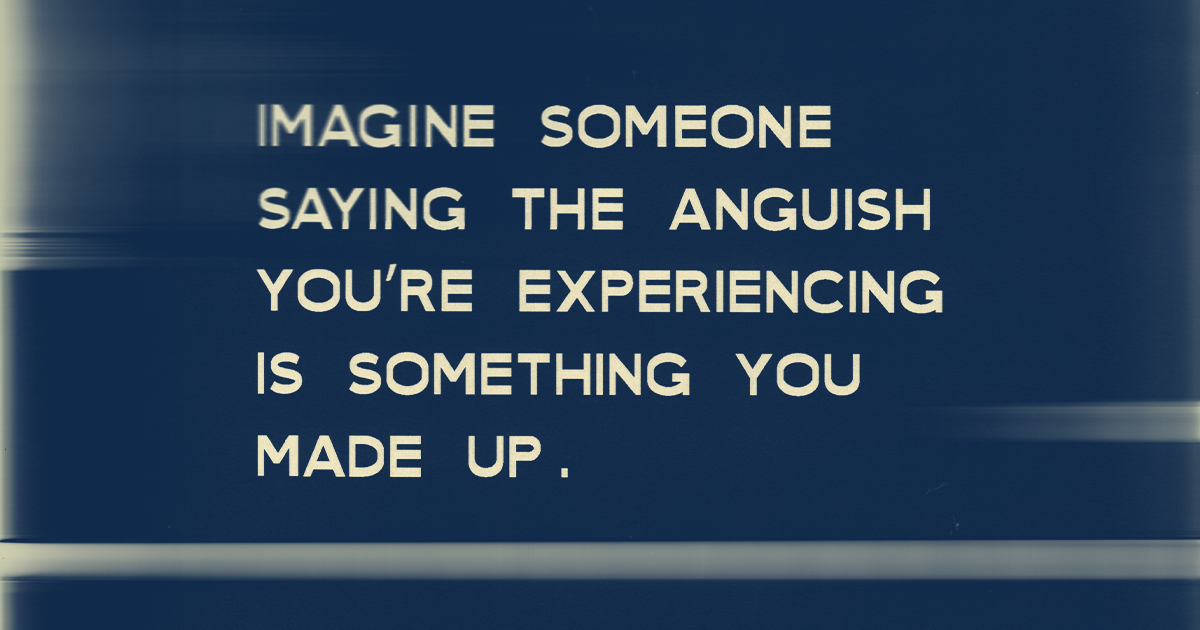 Who, tell me, who would make up these feelings? When the attention you will get is people being dismissive and telling you what you feel are “just thoughts” and some exercise and fresh air should help. Sure, sometimes running does clear my head. Other times, I am just running while depressed.

Why was it that the year that I was suicidal I had also run a 10k in Disney World, with a loving husband, and a cute, Instagram-popular dog, all while surrounded by friends. Why wasn’t all of that enough to cure me, like I desperately wished it would?

Instead, all I could feel was guilt. Guilt over not being able to just be OK, to not burst into random tears, to not hate myself, to not see an empty void when I pictured my future.

Was I not training hard enough? Was I not worthy of feeling well? Was a deity punishing me for being a shitty person?

You see, everything that is being said and has been said about depressed people I have already said to myself. Those words, that dismissal, hurts. Every day you doubt yourself. Every day you insist to yourself that this will be the day when you’ll wake up feeling “normal.” And every day you either fight yourself insisting that you are “better” or you grow and slowly accept that you are not. And that’s OK.

I have also grown to see that it doesn’t matter if others believe I have depression or that it’s real. I have been in therapy for 10+ years. I have taken medication, ran, done yoga, and meditated. And I still have it. It wasn’t until a therapist reminded me that just by admitting I had depression, I could take charge of it.

I don’t want to be faulted for my self-awareness, so I will not fault others for their lack thereof. And, if someone has to make something like this up, even if it’s for attention, wouldn’t you argue, that to save a life, it would be worthwhile to give it to them?

Marie is better known as Mxiety. She hosts mental health-related live discussions and interviews, as well as writes to help defeat the stigma. You can learn more about her and access other resources at mxiety.com.

Our walks together are more than moments of movement. They’re reminders that I’m alive.