Note: This piece explores one individual’s experience with residential treatment. We know others may not have a similar experience.

Cold, dazed, and shaking, I willed the elevator ride to last forever. It was the final space I’d stand in between my normal reality and the locked and monitored world of residential treatment. Once that door opened, I could never go back.

I had a thousand fears that begged time to slow to infinity, but two were particularly loud: First, I was frightened that being hospitalized for treatment of my anorexia and complex PTSD confirmed me as forever less-than-human, fractured, incapable of functioning. Second, I was terrified to be entering a space full of absolute strangers; strangers who would see me at my most vulnerable—who would have the ability to use that vulnerability against me.

The elevator dropped into place, my stomach lurching along with it. The door swished open. I got my first glimpse of the hallways beyond, my first moment face to face with the people who would become my companions.

Until that moment, my trajectory through recovery had mostly been a path blazed in isolation. I had navigated the treacherous wastelands of clinging coping mechanisms that grew like weeds in the shadows of my mind. It was only in the admission process that I finally saw the truths about my experiences written in black-and-white diagnoses.

By that point, I had been fighting my mental battles for a decade and a half. I was deeply accustomed to carrying the weight of that fight on my own.

The moment that elevator door opened would launch me into the first of two hospitalizations within the span of a year. It also marked the beginning of encountering an absolute metamorphosis.

Early weeks saw me wary, existing in the milieu like a ghost, afraid to trust the world with the weight of my existence. I observed. And what I observed was something like magic.

My peers were broken, lovely, healing, alive. They were suffering. And they were letting that suffering drive them into the deepest kind of soul-work a human being can do. There were moments of breakdown, driven to the ends of ourselves by relentless exposures to all of the things we fear the most. There were moments of creativity, puzzle building, favorite songs, temporary tattoos, and laughing so uproariously in the hallways that the nursing staff had to break up our impromptu parties.

Under the gentle guidance of my therapist, I began to understand: My fellow patients were hurting. But they would not harm me. And if there was tension and interpersonal distress, we had staff to gently guide us through to resolution.

I learned a new way of doing relationships, one that began revising neural pathways woven through years of abuse—a way where loving others did not mean self-abandonment. A way where I was not the only one fighting to heal. A way where I could protect myself and have those boundaries honored. A way where I did not have to heal or mend anyone else, but where I could simply bear witness to their being in awe. 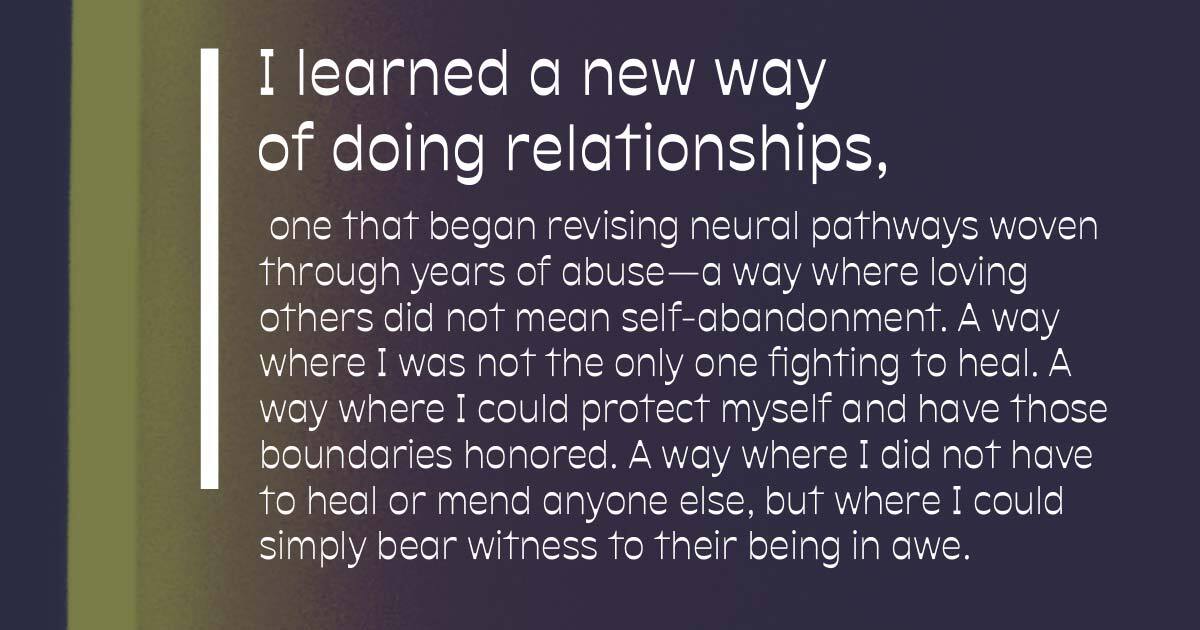 This did not offer any shortcuts in the (excruciating, impossible, life-saving) process I was in. But by my second round of residential, a slow-growing truth had taken root. I could see each of my companions’ hearts unfurling like canvases, dappled with light and shadow, a full spectrum of colors, the day and the dark necessary complements to form a beautiful whole. And if that was true about them, despite (and even because of) their illnesses—maybe the same was true of me.

Loving and being loved by my peers in eating disorder treatment was one of the first steps to restoring a kinder view of my own identity. When I saw them as so much more than their diagnoses or the ways they’d had to survive the unimaginable, I developed the skills to begin seeing myself that way too. They expanded me, broke my fearful, shrunken heart wide open to a merciful new kind of light.

I was right, in a way, about the day the elevator opened: I could never go back again. No, after that moment, my heart would grow too great to be backed into the same old corners. After that moment, I would know myself in a way that would never again allow pain and punishment to stand as the only story about my soul.

On the other side of months spent living and breaking and healing alongside hearts like those, my recovery process is still ongoing. And I am taking the courage and kindness of every person I’ve met along the way with me, talismans to remind me who I am as I stand in awe of who they are.

It is not easy living in reality, and my mind’s ability to close the curtains on my trauma remains unmatched.

Tomorrow Is Too Late: The Intersection of Mass Tragedies + Mental Health

On a national scale, an increase in violent events has impacted and is impacting the mental health of all communities.

Don’t Let The Pot Boil Over

I felt as though I lost control of my life so I turned to a different aspect of my body that I could control—what I was eating.