It was Easter Sunday last year. I was woken up to the news that my uncle had passed. It was completely unexpected, out of nowhere, and truly rocked our little family to the core. This man, who I saw every single week since the day I was born, was gone—just like that.

His death happened right in the middle of assignments and exams for my final year in university, on the cusp of graduating, and it felt like my whole world had been turned upside down. Half of me was consumed by the anxiety that came as a result of witnessing the world stop for someone I cared so deeply for, while the other half used my current educational standing as an escape route from facing my grief head-on.

I immersed myself in work, and even when that was finished, when graduation finished, I still refused to accept this new reality. I was so angry that this selfless, caring man could be taken without warning, and we were expected to just get on with it. He was supposed to see me graduate, he was going to have mine and my brother’s grad photos on his mantle just like he did my cousins, but that wasn’t going to happen anymore. How dare the universe do that? And it was my anger at the universe that made me refuse to accept that this was a real thing.

The unexpectedness of his passing had also left me with a whole new type of anxiety. I was scared to wake up in the night and hear others awake—because what if something had suddenly happened to another loved one? I was scared to get out of bed to even check because I wasn’t ready for more bad news. I was scared every time the phone rang. I was scared when my mother walked into my room and I couldn’t read her facial expression because it had to be something awful, right? I was scared to be hopeful because that’s exactly when things would come crashing back down.

It took me a long time to accept that he was really gone. For almost a year I put myself on a tightrope, swaying back and forth between denial and anger. Grief and mourning are weird things, I knew logically that he was gone when I attended his funeral but even after that I felt as if he’d just decided to move somewhere and was playing a big joke on all of us.

It’s only in these last few months with the anniversary of his passing approaching, that I’ve come to truly realize he’s gone. It hurts to accept that, to know that I’ll never hear his stupid laugh again, or his excitement for new walks he wanted to take us on. But along with that heartbreaking realization, I’ve also found that it’s okay for it to have taken me this long to accept, to still hurt, to still feel angry.

Accepting his passing won’t make enduring the process of grief any easier but there are small pockets of hope: On his birthday, we planted his favorite tree in our garden. It was winter at the time so the leaves immediately fell off. But spring came and with it, buds began to blossom.

While I navigate this time of uncertainty and grief, this tree has become a symbol of hope. Even when all its leaves have withered and fallen off, it still finds the strength to keep going, to stay standing, and to eventually start again. A living, breathing reminder that it’s okay to hit rock bottom, it’s okay to stop and take a breather because there’s another season around the corner—and it’s one that will bring color, security, and hope.

To say that my anxiety has completely subsided would be a lie, but it doesn’t paralyze me like it used to. Time has allowed me to heal. From these feelings of anxiety, of fear, I’ve learned that I can’t live my life waiting for the other shoe to drop. The people that I love are still here now, and I want to love them unconditionally, I want to live my life with them. The fear of loss shouldn’t make me afraid to live, it should make me want to fight to live.

My uncle is gone, I know that. But I also know he’s still here, in the growth of that tree, in the birds that turn up at odd moments, in my dad and my auntie—and that makes things hurt a little less. 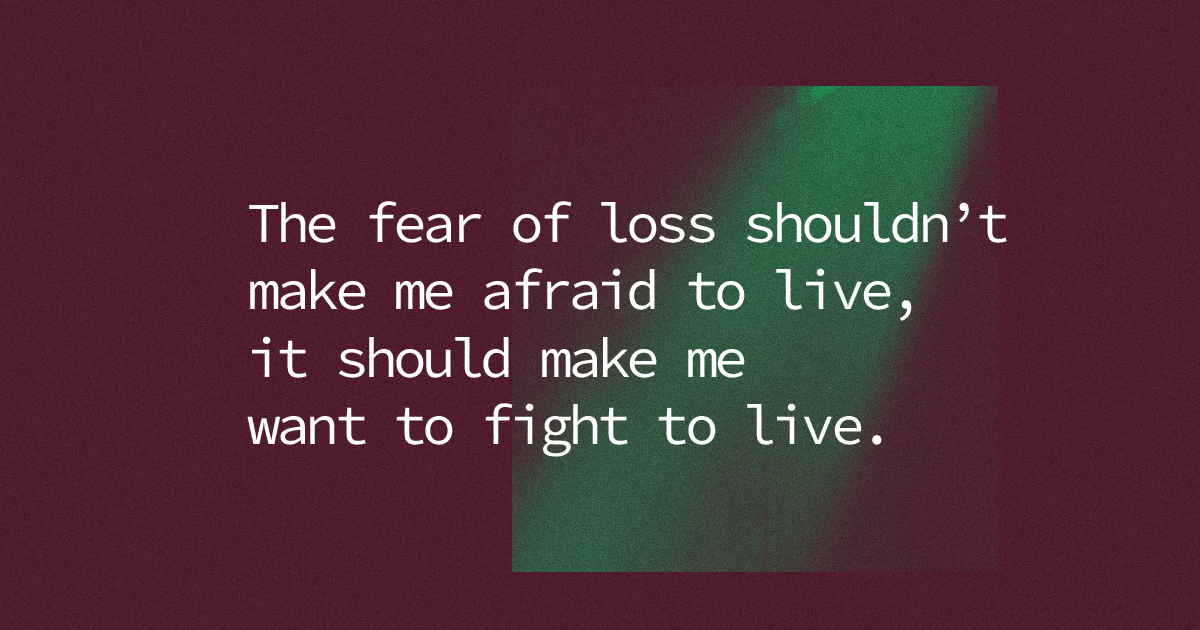 Our walks together are more than moments of movement. They’re reminders that I’m alive.