The piece mentions the tragic events that took place at a movie theater in Aurora, Colorado in 2012. Use your discretion.

Anxiety—no matter how far away I think I’ve gotten from it, it always rears its ugly head at some point. It’s a nemesis that I will never stop battling. It’s survived four generations of my family and will likely continue to plague future generations.

With that being said, let’s journey back to when I joined the family pattern.

It was the summer of 2012, and I had gone to see the movie Rock of Ages. (I have a weakness for musicals and cheesy 80’s hair bands, OK?!) This was right around the time of a mass shooting that took place at a movie theater in Aurora, Colorado, at a showing of The Dark Knight Rises.

As I settled into my seat, I became increasingly paranoid. I started identifying all of the emergency exits. I whipped my head around any time someone entered the theater, to see if they were armed and/or wearing military gear.

When the movie started, I began experiencing light-headedness and severe chest pain. Still, I pushed through because I wanted to enjoy the movie.

I did indeed make it to the end of the movie, however, the physical symptoms only got worse as I made my way out of the theater. So much so that I had to hang onto the wall of the hallway to avoid passing out. After a long while, I staggered to my car and got in. I sat there, paralyzed and convinced that I was going to die then and there of a heart attack. Somehow, I made it home that night, but that evening kicked off a downward spiral into the world of panic attacks.

As the days went on, my life became hell. Every moment, I was either feeling dizzy and having severe chest pains, or feeling like I couldn’t breathe. If it wasn’t physical manifestations, I was paranoid about feeling them. I couldn’t sleep because I was worried I’d stop breathing. At work, I was a semi-functioning zombie.

Every month or so, these symptoms would get so prevalent that I would check myself into urgent care, convinced I was dying. Texts to my family saying I loved them (which I rarely expressed) were included. Following the fourth urgent-care visit, my parents, knowing something was seriously wrong, arrived from Northern California down to San Diego.

Over the next few weeks, I took a leave of absence from work and they cared for me. They took me to the doctor’s office, where I was told there was nothing physically wrong with me. They bought me a massage chair, where I would frequently sit to calm my accelerated heartbeat and breathlessness. They suggested I start seeing a therapist, who made me realize that the most likely cause for the onset of panic attacks was that I had completely shut myself off verbally and emotionally. 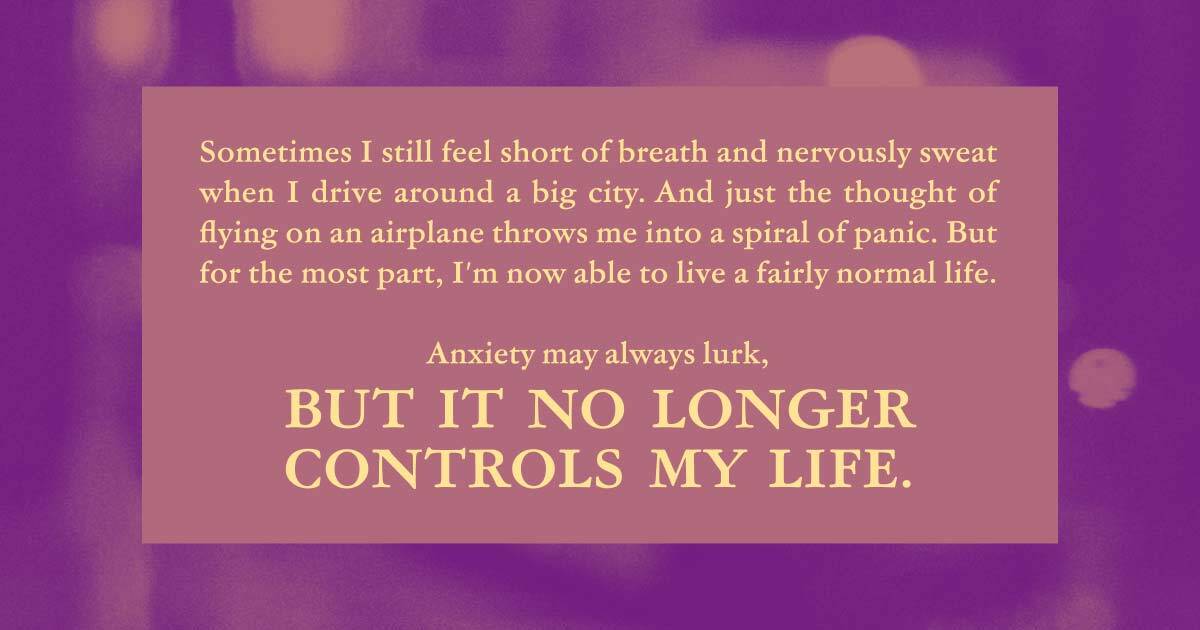 I had barely been talking to anyone, much less telling anyone how I was feeling. All my thoughts and feelings had built up until finally, the dam broke. I hadn’t wanted to bother people with my problems so I kept them “safe” and hidden inside. I had also feared being rejected as the “weird” one if I told people I was feeling anxious because I didn’t know anyone with the same struggle.

With the help and guidance of my therapist, I made changes to care for my mental health. I set up a daily check-in call with my friend Sarah. I  grew to feel comfortable telling people about all I was struggling with. I learned that my friends wouldn’t reject me, and in fact, they could relate. I discovered that by being honest and vulnerable, my relationships deepened.

That was nine years ago. I have yet to conquer anxiety. Sometimes I still feel short of breath and nervously sweat when I drive around a big city. And just the thought of flying on an airplane throws me into a spiral of panic.

But for the most part, I’m now able to live a fairly normal life. I’m on an antidepressant to stabilize. I’m continuing therapy. I’ve learned how to calm anxious thoughts as they pop up. I express my emotions through poetry. I make an effort to talk to someone I trust daily.

Anxiety may always lurk, but it no longer controls my life.

You are not your thoughts. Anxiety is not who you are—you deserve to know peace. We encourage you to use TWLOHA’s FIND HELP Tool to locate professional help and to read more stories like this one here. If you reside outside of the US, please browse our growing International Resources database. You can also text TWLOHA to 741741 to be connected for free, 24/7 to a trained Crisis Text Line counselor. If it’s encouragement or a listening ear that you need, email our team at [email protected].

Wearing My Heart on My Sleeve

Wearing your heart on your sleeve means you can share a truer version of yourself.