I was 14 the first time I thought about suicide; I only journaled about it, making lists of what I imagined would be the most painless ways to go, never sharing my ideations with anyone. Deep down, I knew it was abnormal to have these thoughts but I often chalked it up to teenage hormones—mainly because I was scared to address the real underlying issues. For months, I had been struggling with exacerbated emotions of anxiety, depression, and paranoia. Wanting to see a therapist, I asked my parents who quickly dismissed my request; they responded by telling me, “We don’t air our dirty laundry.”

I grew up in a traditional Indian home. My parents were not religious people but they always ensured that I understood my culture. And culturally, mental health did not “exist” in our world. Family matters were dealt with at home. But I didn’t understand my own emotions, so how could I begin to explain it to them?

At 15, I finally entered therapy due to the recommendation of my guidance counselor. The solutions I hoped to find in that silent office were nowhere to be found. Most sessions ended with meaningless conversations due to the pure shame of confessing my ideations and actual emotions. My anxiety and paranoia slowly ate at me, taking an extreme physical toll, causing me to lose excessive amounts of weight. This physical drain landed me in a psychiatrist’s office, who diagnosed me with bipolar disorder at 16 years old.

It finally seemed as though there was an opening at the end of a long-winded tunnel. A diagnosis felt like a solution. I did, however, misunderstand medication for being a “magic pill.” Medication did not take away my ideations. At the ripe age of 16, I hadn’t truly understood what being bipolar meant. I also did not understand its complex relationship with suicidality, let alone the perplexing cycles between depression and mania and how that would affect my ideations.

One would assume after years of battling suicidality, I would comprehend its complex nature, but no. To this day, it continues to baffle me. Six inpatient stays and I still can’t seem to find the will to live. Each day it frustrates me because I suffer in silence. From the outside, I appear to be thriving but slowly inside I’m wilting. Depression or mania, my mind is constantly fighting this. It will forever be my greatest battle.

I spent years trying to erase my ideations. I had convinced myself that enough therapy and the right therapist could eradicate my mind of these negative thoughts of death. What I realize now is that my suicidality is a mere symptom of my bipolar disorder. It will always be a part of me the way bipolar disorder is, somedays with the right medication it will be less. But each day I overcome my thoughts of suicide I am surviving. By not giving in, I am winning. In a sense, I am thriving.

I have these very bad days when I feel like I am failing and this is when I need to remind myself that suicidality does not make me weak. I admit, sometimes it’s scary. My own thoughts frighten me. I am my own enemy at times. But my thoughts do not make me inferior. Thinking of death does not make me defective. It makes me human. My thoughts are simply a mere part of me, and like my disorder, I will not let them consume me.

As a child, I used to plan my life out years in advance, hoping everything would come to fruition. Years later I’ve learned you can’t plan life; life happens. And for the first time, I’m learning to take it day by day, moment by moment. And instead of planning life, I’m just living life.

I don’t think I ever really realized what it meant to be present for a moment. I’ve gone through much of my life in a rush to get through but for the first time I am trying to be content—and this is my version of thriving. 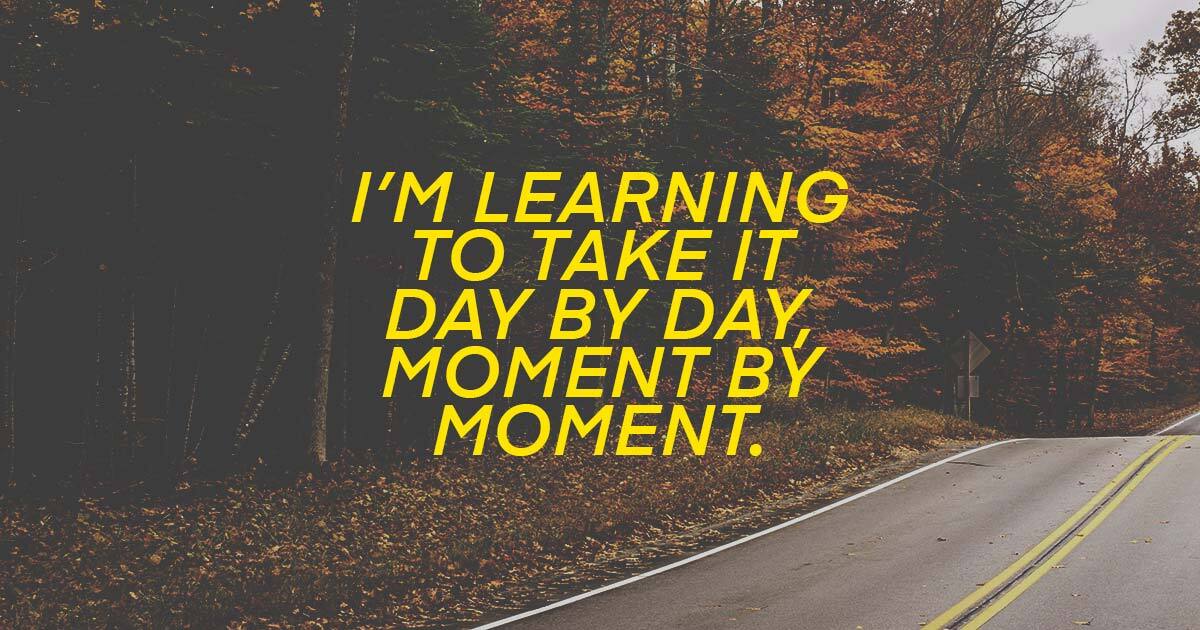