“Those who have a strong sense of love and belonging have the courage to be imperfect.” — Brene Brown

I stood facing the full-length mirror, noting the imperfections I felt I needed to correct. My makeup had to be balanced and flawless to hide the hours of sleep that escaped me, but not too much so I didn’t seem like I was trying too hard. My outfit had to show enough skin so they were intrigued but still left room for the imagination. I could not look or act “too white” or my friends of color would give me a hard time for being white-washed—but I couldn’t act “too black” because that was seen as ghetto. I had to be the supporting friend, the one who could listen to your problems, but yet had to keep my own struggles silent. Every day, I balanced a fine line between who I felt I needed to match to fit into the world and making my own place in the world.

Growing up as a biracial female who struggles with mental illness can pave a rocky road to travel on. I was constantly told that I was not black or white enough, as if I had to be fully one or the other to be accepted. I went to a very racially-separated middle school where you stayed with those who resembled your skin tone and being biracial I didn’t always feel accepted or in place with any group. I struggled heavily with my self-image and confidence and tried tirelessly to fit into a mold that I wasn’t built for. I got caught in heavy mental spirals where I found myself comparing my physical appearance to other girls I knew or saw. My hair was not straight but also not curly enough. I wasn’t light enough to be white-passing but wasn’t dark enough to be considered fully black. Many thought I was Latina, then frowned when they realized I didn’t know a word of Spanish. I wasn’t skinny enough. I wasn’t pretty enough. 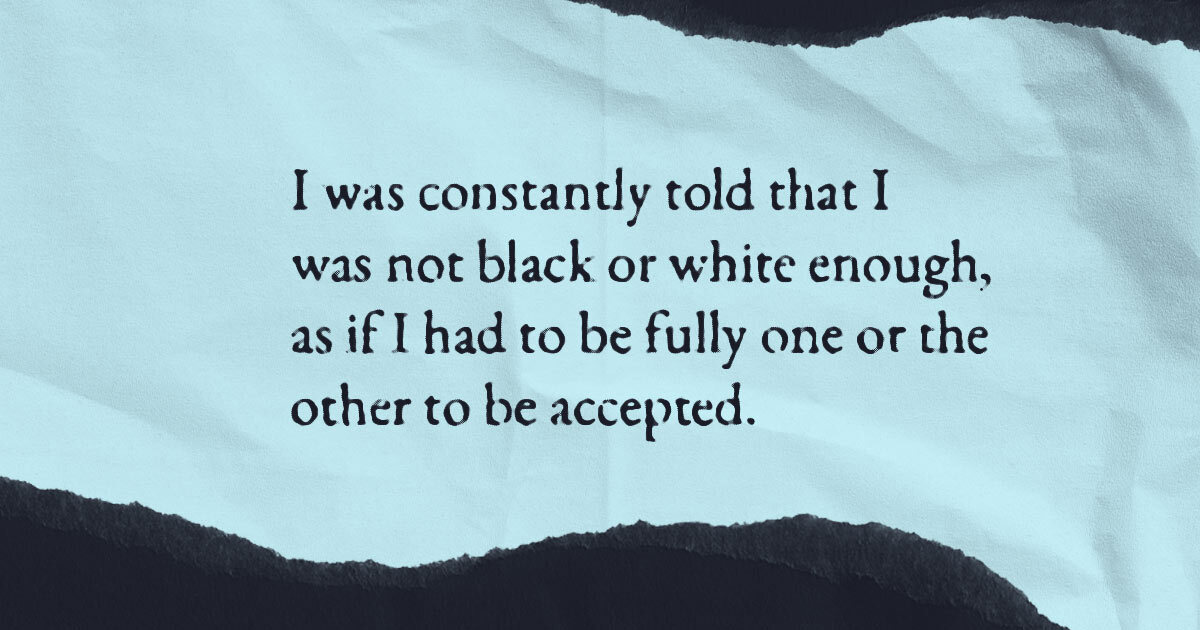 This internal struggle grew and grew, eventually leading to the use of unhealthy coping mechanisms. I started self-harming and found myself turning down meals I would’ve happily accepted before. When my parents noticed, they took me to therapy—which I continue to attend even now. Years passed and my struggles came in waves, some symptoms getting worse than others. While I turned to physical self-harm less, I became fixated on food or the lack of it. I was never concerned with numbers on a scale or calories but how I appeared.

I was never as skinny as I could be. I had to look good in those jeans, that top, and that bikini. I had to be able to sit down and still have a flat stomach. But even as I strived to achieve my mental goal, society had standards for me too. I worked to keep what curves I had intact but tried to lose everything else. I hypersexualized myself because that’s what the world made it seem like they wanted. If I wasn’t beautiful, I may as well have been nothing. If I wasn’t skinny, then I wasn’t anything of importance. I didn’t realize that there was and is so much more to me than my appearance.

Through therapy and a lot of reflection, self-love is a concept I’ve made friends with and work really hard to practice. The days of struggle still exist, of course, but I’ve come a long way. Having a good support system truly makes a difference, but also supporting yourself on the bad days and allowing the space not to be perfect is key to building a loving relationship with oneself.

So, to you (and myself), I say this: Allow yourself to be beautifully imperfect, gorgeously flawed, and radiantly unique. You may not always feel accepted or loved by other people or social groups, but as long as you have that love and acceptance internally, you’ll find your way.