They don’t tell you about the lies you’ll tell others and yourself. In high school health classes, when you briefly talk about (if at all) eating disorders, you learn about starving and binging and purging. Sometimes it’s accompanied by a Lifetime movie from the 90s or a slideshow featuring a sickly-looking celebrity. But they never talk about the lies.

It’s hard to remember the first time I lied about food or how I felt about myself. When you’ve been dealing with something for almost 10 years, a lot of things blend together—if you can even remember them at all. But one thing that I do know is that when you struggle with an eating disorder, lies quickly become distorted into your truths.

After a nearly two-year period of solid recovery, I recently found myself in the midst of a difficult transition. With the stress and anxiety, a huge and bright yellow sign silently screamed: WARNING. That’s when the lies came back, slowly at first.

As January turned into February, things started to unravel. And like a broken record, the belief that I was fine, I was in recovery looped in my mind. But as the semester grew just as the flowers bloomed after the snow melted, so did the lies.

I told my reflection it was repulsive and needed to lose weight.

I told myself there was no point in going to class because I wasn’t going to be anything but a failure either way.

I told my heart that the palpitations were normal, and my head that it was OK to feel dizzy all the time.

I convinced myself that sitting stonewalled in the counselor’s office for the eighth session in a row wasn’t a big deal.

My life was going to look like this forever.

To me, those thoughts became infallible truths—that was, until they were refuted.

As the sun set on Electric Forest after another scorching day in Michigan, the topic of my eating disorder arose. For the Barrier Project, we had been asked to share what was holding us back, keeping us down. So on a giant, tiled wall, I had painted the words: “Recovery is scary, but so is living with an eating disorder.” My therapist had said them to me, and now my personal barrier was on a literal barrier for all to see. 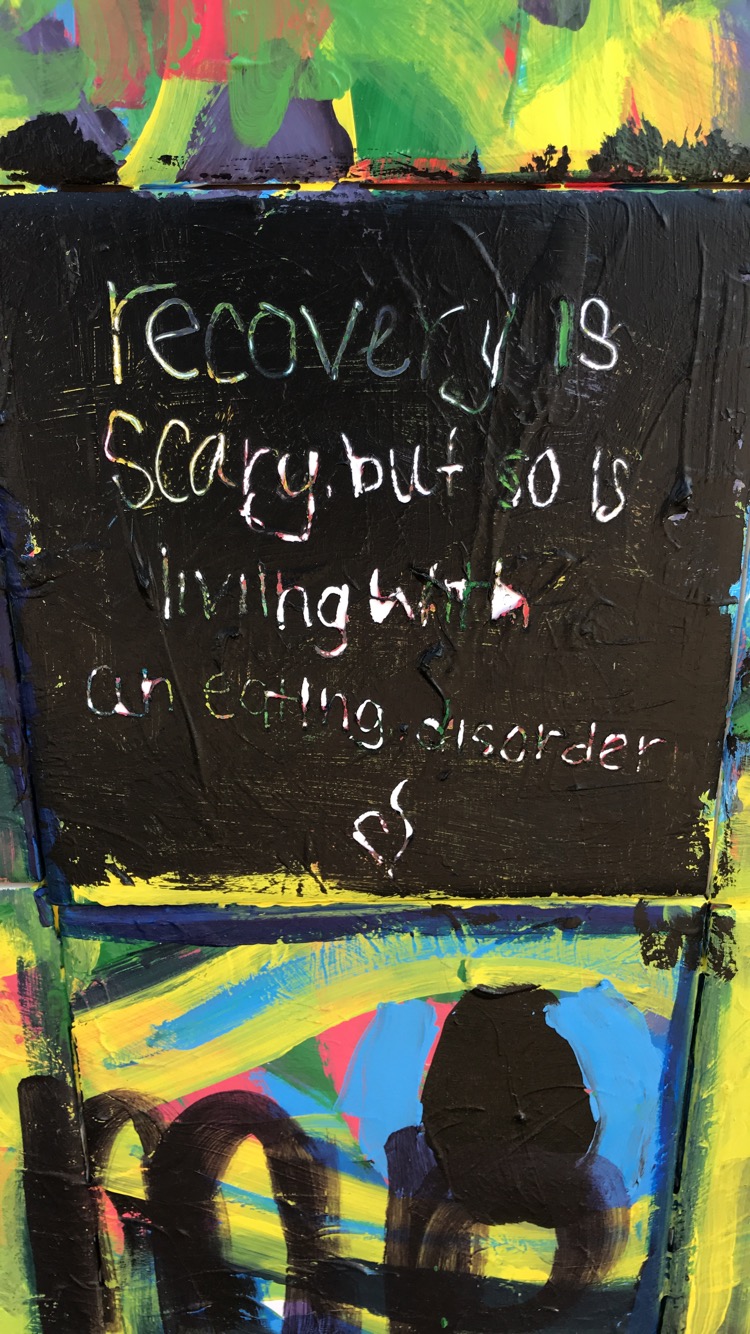 It was at the end of the festival, that the painted tiles, carrying heavy and vulnerable truths, were chiseled off and given back to those in attendance. They were a take-home reminder that barriers, personal or not, are meant to be taken down.

As Chad, the guy behind the Barrier Project, and a friend familiar with my story, tore through the silence and pried my tile off, he told me that my therapist was on to something with that statement. I admitted it was hard to believe, but he was quick to challenge me, insisting that it wasn’t a matter of me believing, but rather re-educating myself. I found myself uncomfortable in his confidence to call me out, but he persisted. And the next thing he told me hit me hard in the center of battlefield my head has been stuck in for six months now: “You know the truth when you hear it.”

I’ve been reflecting on that statement since. What truths have I been hearing lately that my eating disorder convinced me were lies?

The truth is that I ignored warning signs that my eating disorder was back.

The truth is that my grades were suffering and I was isolating myself.

The truth is that I didn’t have an answer when my therapist asked me to name something I thought I was good at outside of my eating disorder.

The truth is that I’m struggling.

But the truth is also, even if I fall out of recovery, I can get better again.

It’s rarely comfortable or easy, and it’s often a fight to believe the truths that professionals, friends, and loved ones speak to and about me; phrases that drip with grace, compassion, and togetherness. But I realize that they see truths I can’t fully grasp yet, and that’s OK. I will let them hold onto those certainties for me as I continue to walk forward through my journey of recovery, until I can be firm and confident in those truths on my own once more.

Father’s Day Without a Father

For me, this day is typically a reminder of everything I didn’t get to have.