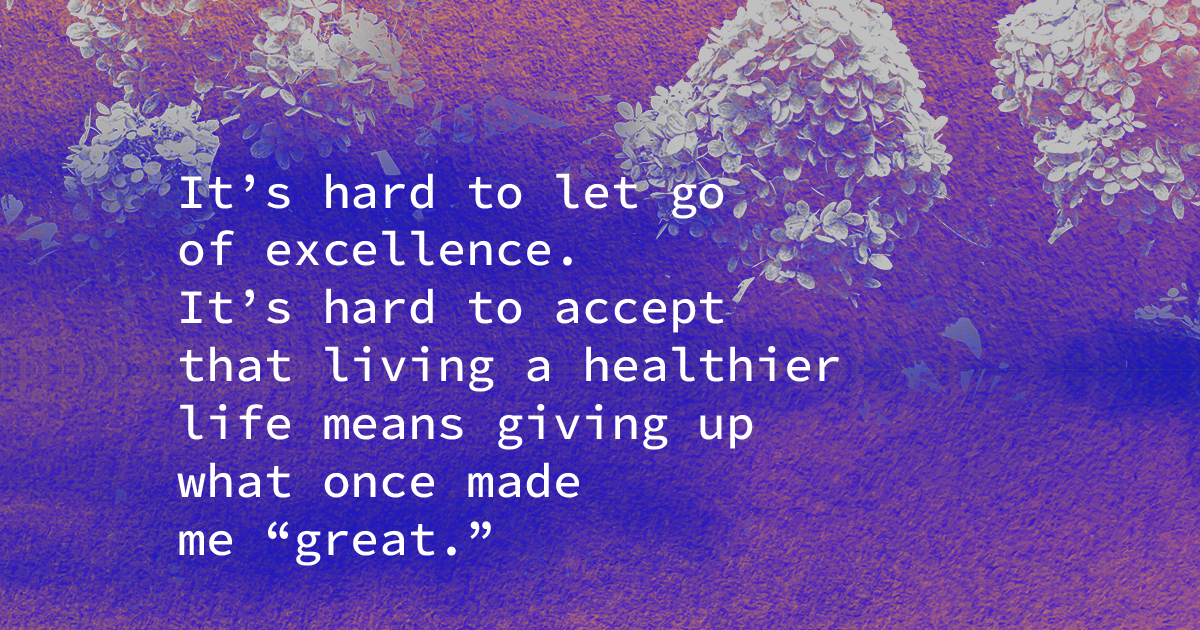 Every personality test I’ve ever taken has told me I have a “Type A” personality. I am an overachiever, a workaholic, detail-oriented, neurotic.

I excelled at school. I’ve exceeded expectations in all of my jobs. I have a reputation of being highly efficient, learning fast, sacrificing whatever is necessary, going the extra distance, and raising the curve for my peers.

Being a middle school teacher came naturally to me because I can multitask like a champ. Someone on Twitter once said that teachers make 1,500 decisions per day. I have no idea if that number is true or not, but it feels like it is. I am definitely competitive, a perfectionist, critical of myself, impatient, energetic, and aggressive when it comes to getting the job done. All of these qualities are necessary when you are trying to appear “highly effective” on paper for your district and the state, make sure all students actually have an equitable chance to learn, and mentor each individual student through the hardest three years of their life.

I took pride in my Type A personality. It made me excellent. I got honors. I won awards. I gave speeches.

I almost killed myself last October.

Honestly, our society values Type A personalities. They make someone highly efficient and productive; two things that fuel capitalism. What I’ve recently learned, though, is my Type A personality was made possible by unbridled anxiety.

I was a professional multitasker because I was obsessed with others’ approval. I literally felt like the approval of others was the only thing that gave me worth. I felt like once I had that approval, I had to continually prove I deserved it by earning it over and over again.

I lived on a hamster wheel, in constant fear that I would lose everything I had earned if I dared to stop and take a break. I told myself that every mistake was a failure, and that failure could kill me. I embodied the Talladega Nights: “If you’re not first, you’re last” mentality.

Basically, I allowed my extreme anxiety free rein over my life. I caught myself in the trap of constantly feeling worthless and not good enough. I carried the weight of the world on my shoulders when no one asked me to in the first place. I was miserable.

And, at the same time, why would anyone assume anything was wrong when I was doing so well? On the outside I was perfect. I was doing “it.” I was achieving my goals, supporting my family, and gaining approval from the people I sought to be respected by.

Unfortunately, yes. This is what success in our society looks like. The narrative of the Type A personality is a convenient way to encourage at-all-costs productivity. As long as someone is productive, they are successful.

By explaining my extreme behavior away with my Type A personality, I was able to hide my mental illnesses. I could avoid dealing with any of my problems by adding more work onto my plate and being rewarded for it by my superiors. If I just kept going, and never stopped, I would never have to face my anxiety for real.

I was winning awards based on my performance. My performance was fueled by my ability to pretend I wasn’t constantly on the edge of cracking, while I took on more and more work.

And then I finally cracked.

My Type A personality was really anxiety all along. And my need for the approval of others was trapping me in cycles of toxic thoughts, behaviors, and emotions. So I’m officially letting my Type A self go.

Type A Renea is gone. I put her to rest in the name of mindfulness, happiness, self-love, and stability.

This is a major transition. Living a mental health-focused life has led me to make a lot of changes. Living mindfully and focusing on one day at a time isn’t traditionally conducive to success in a capitalistic sense. I guess you could say I’m starting to change my definition of “success,” as I’m far happier as a Type B.

The Difference Between Panic and Anxiety

While these terms, “anxiety attack” and “panic attack,” tend to be used interchangeably, they are actually quite different from one another.