Five years ago the organizers at Sasquatch took a chance on us. Rich and I had been admiring this festival from afar, and after a handful of shot-in-the-dark emails, we were welcomed warmly into their Community Village of nonprofit organizations. As a response to that initial vote of confidence from the festival, I have held Sasquatch close with a sort of reverence. In our office, the festival unofficially marks the beginning of summer travels. Each year, we add a growing number of springtime festivals to our circuit, but Sasquatch has found a way to distinguish itself.

There are people I see at the Gorge that I only get to see at the Gorge. We reflect on how far we’ve come or how long my hair has grown or how their kids are set to graduate high school or how the past 365 days of sobriety seemed especially kind or difficult. I’ve stood by year after year as their Fears and Dreams worked their way into the fabric of the festival and its painted skies.

If you’ve filled out one of our Fears vs. Dreams cards, you know we pose two questions:

While we often speak of life as an exercise of give and take, it always seems like I was doing the majority of the taking. Each year I fly home with a head full of interactions and boxes of Fears vs. Dreams response cards. But what did the 100,000 people who attended the festival over the past five years take away?

I knew that I wanted this year to be different: I wanted the festival attendees to do both the giving and the taking. So I invited them to answer a new question:

What is the one thing you wish could say?

Maybe they never found the time to express it, or perhaps the courage escaped them. Maybe it was meant for a friend or family member or a stranger or themselves. This was an invitation to give up what was weighing on them.

We then invited attendees to take a card – written by a stranger – that had their answer to this question:

What is the one thing you need to hear?

I saw hundreds upon hundreds of people enter our tent to share their pleas and pieces of wisdom, their encouragements and points of exhaustion. They left with a strengthened spine and lighter heart and the belief that what they left would find its way into someone else’s car or locker or wallet or mirror. I saw friends embrace as they left a message for a life that ended too soon. I saw lovers take a stranger’s note and hold it as tightly as a childhood wish, believing that a new start could still greet them as they left the tent.

As individuals revealed thoughts that were dormant for too long, they opened space for more stories to fill. The very vacancies people walked around with for months were filled with the common cries of people they may never meet. For the hungry, the angry, the lonely, and the tired, notes from strangers carried a reminder that there was and is a place for them. For those confusing life with a chore, they found promises of purpose. For those convinced that they were meant to walk through crowded halls alone, I counted no fewer than 46 cards urging them to find their voice and the shoulders of another to lean on. One card said it plainly, “I WON’T BAIL!”

We shared this space and breathed in the air that was still humming from the Main Stage, and we realized that we shared more than we could have ever imagined. After this festival, we’re hundreds of connections down, and we’ve only got another 7 billion or so to go.

But we’re off to a good start. If you’re reading this, this is your invitation.

We can’t wait to hear your response. 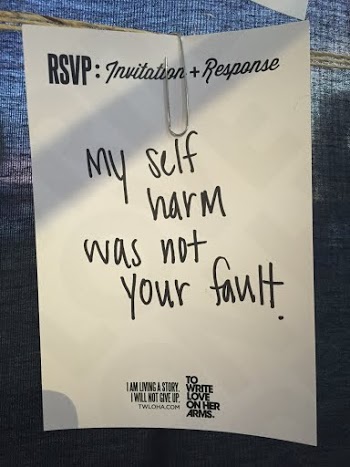 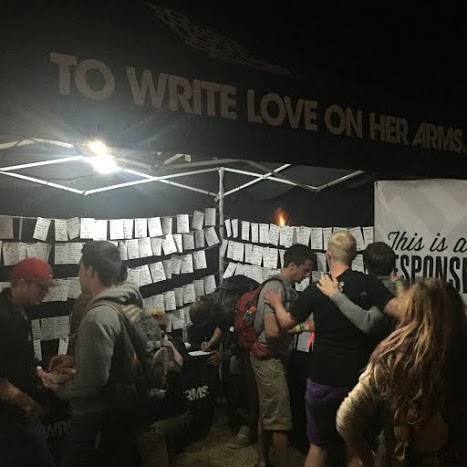