They say the mind wants what it knows it can never have. In my case, I want closure. More accurately, I suppose, I want answers. Answers which I could never get, and which would probably disappoint me if I ever got them. In 2017, I was diagnosed with Post-Traumatic Stress Disorder after an emotionally abusive relationship turned sexual assault. After nearly two years of therapy, I am thankfully in a much better place than I started. But, one question remains in the back of my mind: why?

My therapist would have called it a stuck point, something which prevents you from moving forward, keeping you stuck in the past. I did worksheet after worksheet on dismantling stuck points; yet, this one remains sticky. Perhaps because in trying to find an answer, my mind runs wild. I can come up with any number of reasons why he did what he did. I can rationalize as much as I desire. I’ve probably come up with any and every reason imaginable for it. Still, the question stands: why?

Most days, it doesn’t bother me. In fact, I rarely think about it. However, when I do, it’s a rabbit hole, causing me to think and rethink. In my head, I write and rewrite letters addressed to my abuser, begging for answers. Oftentimes I’m screaming with rage, telling him how much I hate him. Other times, I’m attempting to appeal to his humanity. I know the letters—no matter the approach—will never be sent. 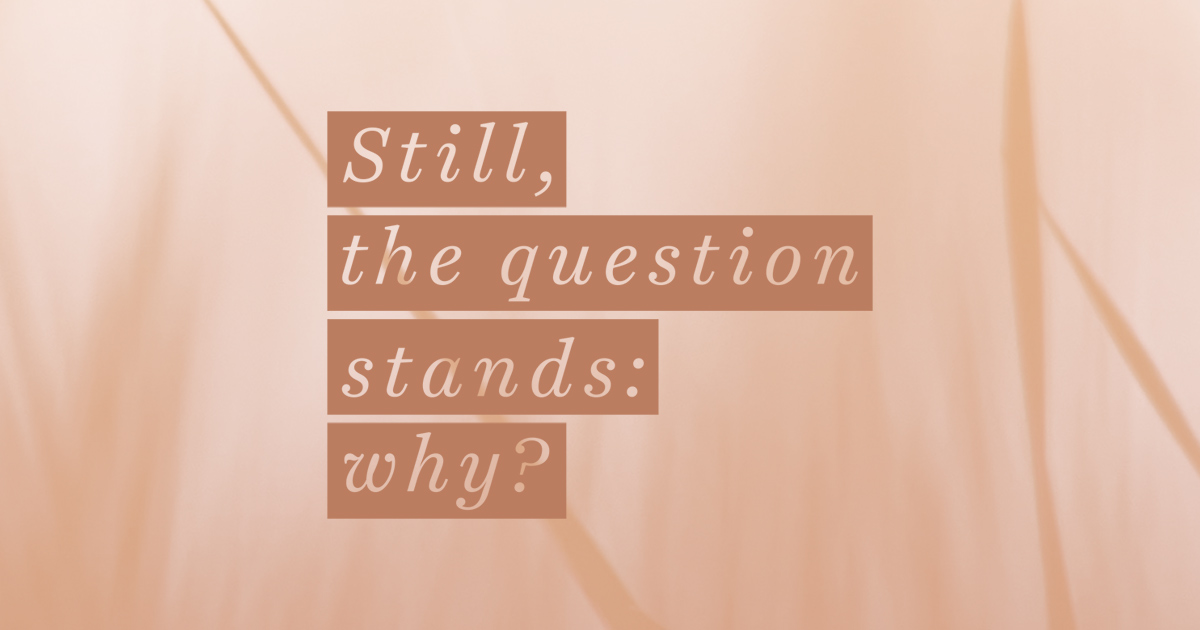 In all my imaginings, I’ve also come up with possible responses I could receive from any letter I sent. None of them are satisfying. I think part of the issue is that once I got whatever response, that’d be it. I imagine it would feel like the fish in baggies at the end of Finding Nemo: now what? I’ve spent all this time wondering and imagining, now I have The Answer. Having that answer doesn’t solve anything, even though sometimes it feels like it would. Everything that happened still happened. No reason can make up for all the damage that has been done. Maybe I want an answer so I can decide it’s not worthy of forgiveness. Maybe I imagine the answer would shift the power dynamic and I would feel I regained control of something. Maybe I just want to hear that he’s remorseful for what he did, or at the very least cognizant of the fact that he hurt me.

It’s discouraging, being almost better but not quite there. Sometimes I feel like I’m looking at one last hill to climb but I’m perpetually stuck at the bottom, longing for the top. Logically, I know this isn’t true, and that even the concept of “better” is flawed. So, I’m learning to live with my stickiest of stuck points. I’m embracing the fact that it may never go away entirely, part of me may always remain curious.

Maybe I don’t have closure, but then again, life rarely offers us the opportunity for such a thing. Our lives do not resemble those that exist in movies or books, where every loose end gets tied up before the credits roll or the author writes “and they all lived happily ever after.” It’s more complicated than that.

Breaking the Cycle of Generational Trauma as a Multiracial Woman

If there is anything I would or could tell my younger self, it would be: you are worthy of hope despite how your inner and outer worlds make you feel. I am a multiracial woman of Puerto Rican, Filipinx, and Russian descent with Obsessive Compulsive Disorder and Generalized Anxiety Disorder raised in a predominantly white […]