Now, I’ve never been a fan of show and tell. I’m not even sure if I ever participated in it in school, or whether either one of the seven (yes, seven) schools I went to had it as an activity. To me, it is just something that happens in movies, or as of late, Stranger Things.

Then, one day the borders opened in the Upside Down, and with them, my need to show (and tell) people about the new (now old) addition to my life: medication. It became a nighttime reflex, and I can’t quite explain why.

“Look, these are the meds I take.”
“The wrapper looks like the old Cadbury wrapper.”
“Look, these ones keep me stable.”
“This is the antidepressant and this is an antipsychotic.”
“Look, this controls the madness.”

The first time my doctor prescribed me medication, we were not yet living in the Upside Down. I was sitting in the pharmacy waiting room of Aga Khan Hospital, debating whether I should quickly run and get a coffee, but too worried I’d miss my ticket number being called.

It took a while, I could have gotten that coffee, but I was handed my first ever psychiatric medication: citalopram. I cannot for the life of me remember the brand I was given, only that it was either 5 mg or 10 mg. Me and the Forgotten SSRI had a short-lived relationship. A month later I was back at the same pharmacy’s waiting room, debating about the coffee again, until I was joined by Aripitas and Lamictal, a mood stabilizer and an antipsychotic.

In one of the earlier episodes of Orphan Black (here’s another TV show reference), Tatiana Maslany as Sarah pretending to be Beth asks her psychiatrist what the difference between a mood stabilizer and an antipsychotic is. And every time I rewatch that episode, I always ask out loud, “Yes, what is the difference?” And just a few days ago, somebody on a Bipolar Disorder Support Group asked the same question. It has 52 responses, and I still don’t quite have an answer for Sarah as Beth, or myself, except for maybe,

“Antipsychotics are usually prescribed for hallucinations, hearing voices, etc. Mood stabilizers are just for bipolar in general to level you out”—which was one of the comments from the Facebook thread.

I don’t remember the timeline of me, the Forgotten SSRI, Aripitas, and Lamictal—only that I stopped taking them (not on doctor’s orders but just on vibes and whatever, I’m fine). That was a recipe for disaster, and trust me, I’ve made cupcakes from scratch and grilled them before. 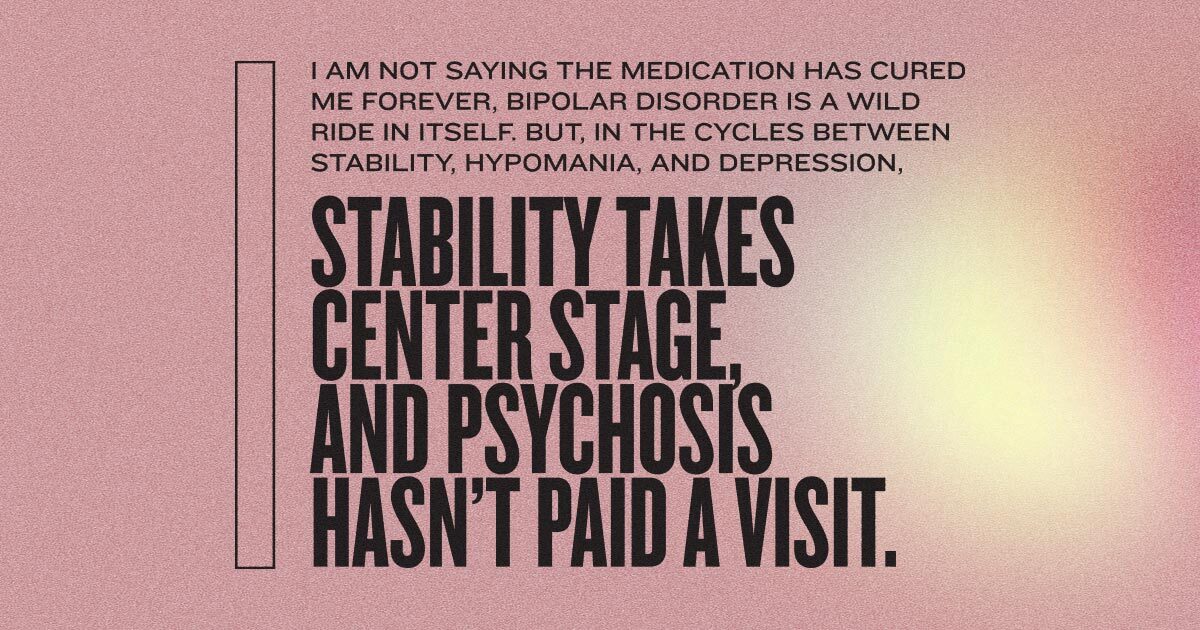 When I got introduced to homeopathic psychiatric medication, we’d been living in the Upside Down for around a year. Now, these didn’t have milligrams nor did they come in tablet forms like the Forgotten SSRIs. They were in little white tubes with red lids. I was instructed to not eat anything 15 minutes before or after taking the tiny white tablet that looked like a full stop.

Life on them seemed great. I didn’t have the brain fog! The backpack feeling? It was my actual backpack! I was hanging out with my cousins, and my almost weekly moments of endless crying and panic had reduced. Life was great! I was even rearranging my room, doing yoga, and going on walks!

Most days I felt on top of the world. Until at some point, it all flipped and got out of control. My patience was running thin and I couldn’t quite concentrate on what I was doing. Just buying things. Just being on but still in a fog, but like a speedy fog. As though someone in my head kept changing the TV channels and each channel was static. The medical term for that is hypomania. And no, it is not fun.

Still, me and homeopathy, we kept going. Adjusting doses as and when instructed. Breathing through the cycles of hypomania, depression, and stability. Hypomania and depression taking center stage. We managed—homeopathic medication and me—until one day we were thrown into psychosis. Just when I’d adjusted to life in the Upside Down, too.

I was at Westgate, looking around, and feeling like every single person was going to hurt me. The someone in my head had stopped changing TV channels and was speaking to me. This brought my and homeopathic medication’s journey to an end. A few weeks later, I was at a different doctor’s office, waiting to be introduced to Mirtaz and Qutipin, an antidepressant and an antipsychotic.

It’s been a year and four months, and we’ve been going strong. Sure the initial months of us adjusting to each other weren’t fun. And yes, my dreams are vivid to the point that on occasion I think they actually happened, and yes, I get nightmares more frequently than I would like. And sure, the two doses make me uber-drowsy, but the benefits outweigh any of these feelings. There is no heavy backpack feeling, there is rarely brain fog—I just forget things sometimes.

I still have to manage my external life: making sure I exercise, sleep enough, eat enough, speak to people. There are no more long island iced teas for me either, but regular tea works just fine.

Now, I am not saying the medication has cured me forever, bipolar disorder is a wild ride in itself. But, in the cycles between stability, hypomania, and depression, stability takes center stage, and psychosis hasn’t paid a visit.

We’re doing well, Mirtaz, Qutipin, and me. And maybe that’s why I get so excited to show and tell, to say, “Look, the meds that breathed life back into me.”

You are capable of living with bipolar disorder. Healing is still possible. We encourage you to use TWLOHA’s FIND HELP Tool to locate professional help and to read more stories like this one here. If you reside outside of the US, please browse our growing International Resources database. You can also text TWLOHA to 741741 to be connected for free, 24/7 to a trained Crisis Text Line counselor. If it’s encouragement or a listening ear that you need, email our team at [email protected].

My Triggers For and Warning Signs of a Bipolar Episode

My recovery did not begin until I truly accepted I would have to manage and cope with Bipolar Disorder for the rest of my life.

I come from a long line of family members who were taught to hide their mental illness, hide their differences, and lock the doors on their trauma.