This interview was originally shared in 2013.

Throughout the month of September, which is Suicide Prevention Month, TWLOHA and many other organizations are talking about stigma and the ways in which it hinders discussions of mental health and suicide. Of course, a primary way of challenging harmful stigma is to educate yourself about suicide, what causes it, and how you can help stop it. There are many individuals, organizations, and resources sharing honest stories and statistics rather than reinforcing stereotypes, and it’s important to listen to them. By learning together about mental health, we can be an informed community better equipped to offer both hope and help to others.

One individual from whom we have learned a lot is Dr. Thomas Joiner, a professor of psychology who has devoted much time and thought toward studying suicide. His books, Why People Die By Suicide and Myths About Suicide, present academic and personal insights into the subject, stemming from both his research and the experience of losing his father to suicide in 1990. (Earlier this year, Dr. Joiner’s work was also featured in Newsweek’s stirring cover story on “The Suicide Epidemic,” which is worth taking some time to read.)

We had the opportunity to get Dr. Joiner’s opinions on some of the present realities of suicide. We hope you’ll get something from his responses below and that it might encourage a deeper, fuller understanding of what it takes to prevent suicide.

Dr. Thomas Joiner: One is that suicide is selfish. It certainly may seem selfish to those who are left to cope with the aftermath, but that is another matter from the death being motivated in the first place by selfishness. A typical motive, by contrast, is the belief that others will be better off. In my books, I call this state of mind “perceived burdensomeness.”

TWLOHA: What are some recent trends and statistics about suicide that people should be aware of?

Dr. Joiner: An important trend is the increase [of suicide deaths] in people in the middle-age years, from around 45 to 60. We do not have a good understanding of why this increase is occurring, but we know that it is. It’s an urgent area for future research. Much the same can be said about the rise in military suicides. My colleagues and I are working hard on the latter problem, and some information on our Military Suicide Research Consortium can be found at www.msrc.fsu.edu. 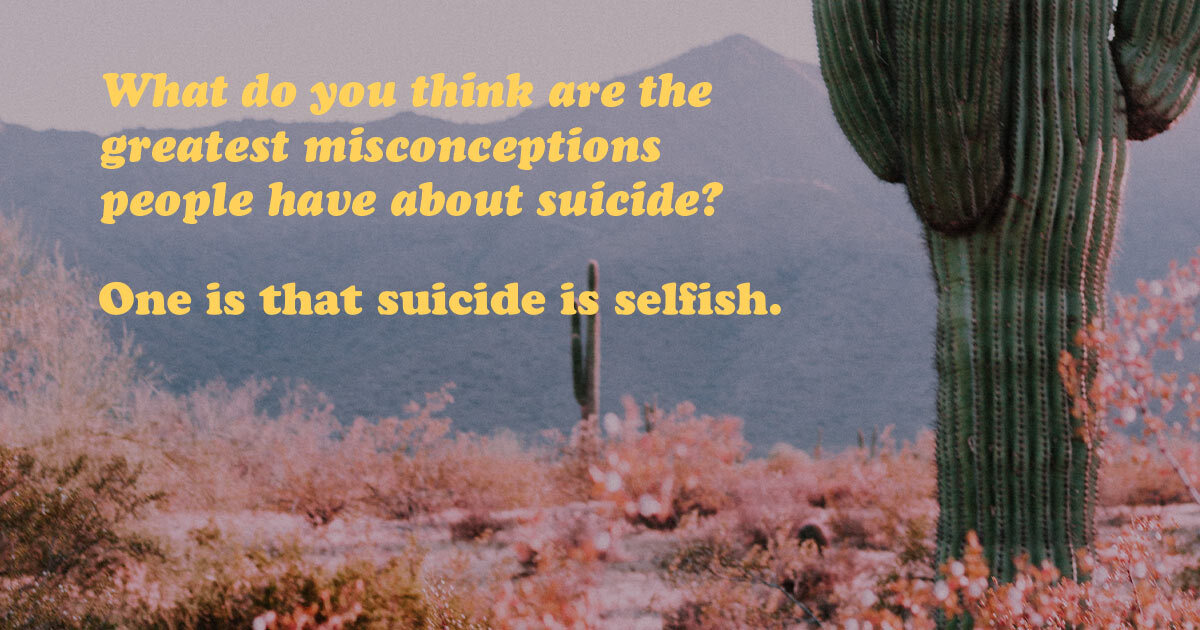 TWLOHA: Much of your personal interest in exploring this subject has been driven by the fact that you lost your own father to suicide. What advice or insight can you offer for other survivors of suicide as to how they can recover from or channel that loss?

Dr. Joiner: I had been focusing on mood disorders and suicidal behavior before my dad’s death, [so] his death did not really change my focus or direction. But it added a tremendous sense of urgency to the work, as well as a personal understanding of suicidal people and of the bereaved.

The loss of a loved one to suicide is intensely painful, and there is no way around that. The pain decreases in its intensity over the years, however, [and] many people find survivor groups or personal grief counseling helpful. Understanding can ease the pain somewhat, and I wrote Why People Die By Suicide with this in mind.

TWLOHA: What would you say to people who might have lost someone to suicide or have faced thoughts of suicide and are wrestling with the unknowns of this issue?

Dr. Joiner: It is sometimes true that there are things that are just lost to history, in particular instances, but I do not think it is true that suicide, in general, must retain some form of unanswerability. We can and should figure it out, through science and advocacy.  Pouring one’s energy into activities like this can be very helpful with the bereavement process. Anyone experiencing suicidal ideation should reach out for help, for example, to a health care professional.