Someone once said that the true definition of insanity was not doing something over and over again, hoping the result would be different than the previous time—but that it was doing something over and over again, knowing that the result would be the same as the last. That’s my addiction. That’s my alcoholism.

Time and time again, I would pick up that bottle following a period of being sober (maybe three months?), thinking, “Yes, this time will be different. I’m not going to blackout. I’m not going to have any more than one or two. I’ve got this. I have got this!” Well, if I really did have “this” I wouldn’t be here writing to you, would I?

As I approach my third year of sobriety on July 29, 2018, I’m reflecting on this insanity. Why couldn’t I just drink normally? Why couldn’t I stop after one glass, one beer—or even two? Heck, why couldn’t I go a whole Monday without pouring myself, four to six glasses before my lunch even arrived at the restaurant? That insanity, simply put, is my disease.

Yes, it’s a disease. Not weak will or a product of how I was raised, or a sin or something metaphysical. It’s a disease. A lack of control, no control—what the heck even is control?

Control was the other paradox I argued with. If I could only control my drinking, then maybe I wouldn’t be so insane, right? If I could control the urges to keep pouring, then I’d be OK. But the more control I tried to exert upon my disease, the less control I actually had. It controlled me. It consumed every waking moment I had.

Picture this: It’s 2011 and my wife suffers from two miscarriages. Unsure on how to support, I drink. I can buy her some booze to help. Forward to 2012, and we have our rainbow baby—our third child. Things are going to get better. I can feel it. I continue to pour the wine because life is good. Three kids. That’s perfect. In 2013, our son is diagnosed with autism. Shattered. Grief pours over me that my only son will not be what I hoped he would be. What would he be? I have no idea what to do. I disappear for the first time into the seedy underbelly of the city, flush with wine, blackout drunk, doing who knows what with a laptop strapped to my back, wearing a suit (I am an insurance broker by trade). It’s still 2013, and my wife is diagnosed with depression. She gets medication. The diagnosis is wrong. She becomes suicidal. Back to the doctor. She gets a new diagnosis of bipolar 2. New meds. Still, no change at home. She mostly stays in bed. I do all the work—for at least a year as she begins to get better. All the while, I drink. Now I’m drinking at least two bottles a day. I’m overweight. But the kids are happier and the wife seems to be doing better. She bought a typewriter and is writing poetry. I used to write. Books. Movies. Music. Songs. Everything. I used to write her poetry; notes of love undying. I disappear for the second time into Vancouver. I come home in my suit, with pizza in the inside pocket, unsure how that got there, and unsure if I should tell her I spent eight hours in a strip club. But she knew. Putting the foot down is an understatement. The guillotine fell and I knew that maybe it was time to try and get a hold on this drinking thing. Nothing was going my way anyway. My 18-year career at my previous employer was gone. No chance of ownership for this alcoholic.

I remember it was October of 2014 and I was laying on the couch, fighting the urge to jump in the car and go to the city or the liquor store or a restaurant or call a buddy up—wait, I didn’t have any friends at this point actually—but then I heard the click clacking of the typewriter in the next room. I knew she was writing about me again. I had no self-confidence and I feared she’d pack up and leave with that damn typewriter. Then she walked into the room and gave me a poem. I read it; it was incredible. She was amazing at this poetry thing. She gave me a half smile and said, “You wanna try? You’re a good writer.” I scoffed. I wasn’t good at much I remember thinking.

But I sat down and wrote a piece about how I felt in that moment, in the middle of my pity party. I loved the feeling of the keys hitting the paper. It was like I was punching something, getting out the pain, the frustration, the hatred of myself. As I typed, it began to lift. I began to feel a change coming over me, and soon, I couldn’t be torn away from the typewriter.

My wife had created an Instagram page and began posting her writing there under a pseudonym, and I, followed suit. I called myself “The Hopeless Loser,” a name I laugh about now, but at the time, is how I felt. Later I changed it to “The Poetry Bandit” because I felt that my name had to reflect what I was trying to do: steal back my love of writing from alcoholism.

I’d like to say that this is when I quit drinking for good, but it wasn’t. Despite the outlet for my feelings, it wasn’t keeping me sober. Something was missing. Something was still holding me back.

As I worked on crafting my poems, I continued to relapse. I had three months sober three different times in 2014, and in 2015 I just gave up after a small getaway with my wife where I invited wine fully back into our relationship. I promised her that I would be smart about my drinking. I know, right? What a ridiculous thing to say after all I put her through. Still, I think she thought it was better than having me sit around and play victim. On that particular trip I wrote:

I remember being so unsettled in my soul. Everything was everyone else’s fault.

One day, in May, I went back to the city, sober and knew I would be having a drink at lunch. I knew it. And I knew the whole day, I would mess up. So, again, I disappeared. Into the city. Did all the same things I did when I went to the city. Parked the car. Went to a restaurant. Had a business lunch. Met a buddy after. Had more drinks. He would leave and I’d have more. Then blackout. Hit the strip club…I think. Then stumble back to the car and wait for someone to drive my drunk ass home.

May 3, 2015: She had the same look on her face. Again. I actually thought she would leave this time. But she didn’t. So I gave it a good shot. Sobriety. Blech. The word churned in my mouth. I looked over at this book about recovery that a friend on Instagram (who was sober) had sent me. I read it. I knew what I was, but I didn’t feel like doing anything about it. I just didn’t get it.

Why couldn’t I stay sober? Why the same old song and dance? Why, despite my best efforts, could I not drink normally?

Two months passed and I relapsed again. I went out and bought some wine for my wife, and I dug in with both heels—I was determined to enjoy my wine. She rolled her eyes and said I had to promise not to drink outside the four walls of our home. Sadly I agreed. The writing began to appear on the walls though, and I wanted to escape.

July 29, 2015: I came home early from work. I stood in the kitchen pouring myself a glass of wine. I looked into it as I poured it and thought, “What the hell am I doing?” I put the glass down and said to my wife: “I’m done.”

I was done. Not with life, but with drinking. I poured that $100 bottle of wine down the drain. Smashed the glass. Smashed all the glasses actually. Poured my scotch out. All the beer. Gone.

After that, I hopped in the car and went to a recovery meeting I knew of near my house. I’ve never looked back since. And that meeting I went to? I still go once a week without fail.

Today, I can honestly say that writing was a huge part of me getting sober. Through it all I would write a poem about what it felt like to be sober for a few days, and then what it felt like to relapse. I wrote a whole book of poetry about that 2014 – 2015 escapade of failed sobriety. I called it, “My Sober Little Moon” and to this day it sells quite well.

I released that book after my first year of sobriety, and to this day, I receive messages from people and fans who have told me they’ve added the book to their daily sobriety routine, or that it moved them or a loved one to go to rehab and give sobriety a try.

Writing not only helped me identify I had a problem with alcohol, but also that I had a spiritual malady, an insanity I could not solve on my own. The Poetry Bandit was born out of necessity to help me navigate what so many addicts have such a hard time accepting: That they are “insane” for thinking that they can do anything in moderation with a result other than failure. 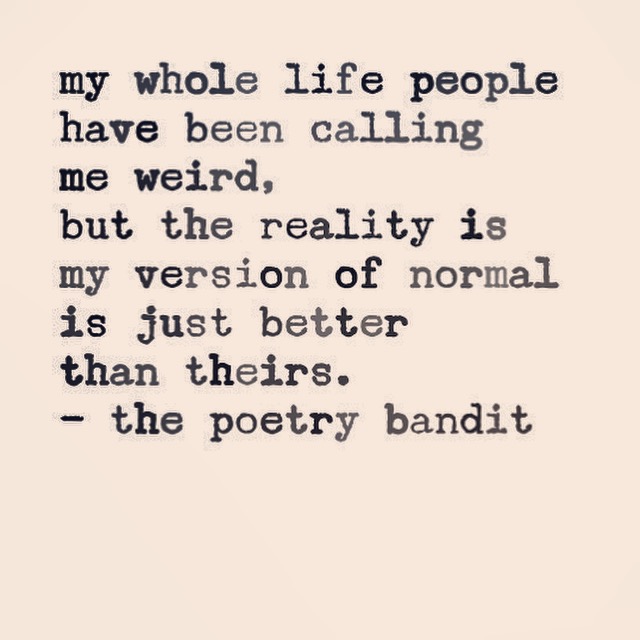 So, if there is anything I can recommend to people who are struggling with a substance abuse disorder, whether it be alcohol, drugs, pills, a mental health diagnosis they just don’t want, it’s this:

Write your precious little heart out. Don’t worry about anything else. Just write. As you write, you’ll be afforded the opportunity of self-reflection. Share it on social media anonymously to avoid family and friend judginess. No one in my family or small circle of friends knew about The Poetry Bandit for three years. I’m glad I did it anonymously because it allowed me to explore all the parts of myself I was too shy to share with the people I knew. 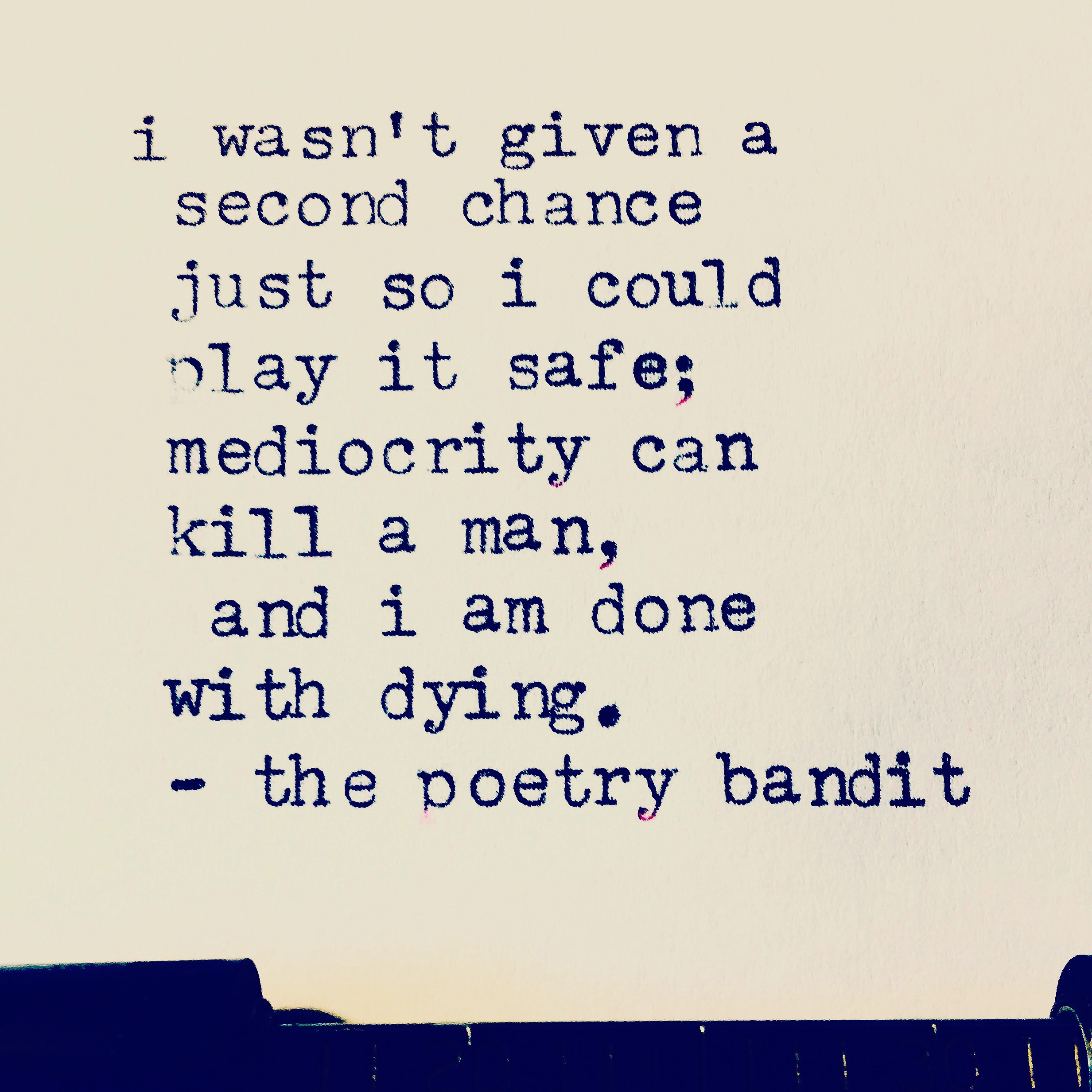 Also, seek professional help and a fellowship of other addicts. Writing won’t keep you sober, but if you do this while working a recovery program, it will be easier for you.

After years of hard work, Jon was sought out by MacMillan USA to publish a book of poetry. You Only Love Me When I’m Suffering, releases in bookstores worldwide on September 18, 2018. You can preorder it here.