I threw myself into my life recklessly. I went back to work selling sunglasses at the mall, I went out dancing and drinking with friends. I said yes to every opportunity that came my way (including a few I absolutely should have said no to). I became the life of the party. And while everyone knew why I had suddenly disappeared for a time, I made sure we were all too busy having fun to bring it up.

My mom didn’t talk about it, my boss didn’t mention it, my friends pretended like I had just been on a long vacation. I had the scars on my arms to remind me of what I’d been like before and what I’d done, but I covered them up and went on with my life.

One reason was that I simply wasn’t ready to deal with it. I’d come out of the hospital ambivalent about my survival. I was kind of relieved I hadn’t died, but I wasn’t exactly sure how I felt about living. It was complicated, and I knew it would take time to sort it all out.

The other reason was that I didn’t want to be that guy. The one who’d attempted to end his life. I thought the quicker I moved past it, the quicker everyone else would forget about it too. Instead, I could be the guy who danced badly, had the absolute worst taste in men, and who couldn’t help singing “Total Eclipse of the Heart” at the top of his lungs whenever it came on.

For the most part, I succeeded. Throughout my twenties, I worked out my feelings about my survival—I was ultimately grateful I had lived—and learned how to manage and live with my depression. My old friends rarely brought up my past, and my new friends didn’t know much about it at all.

When I began my writing career in 2010 at the age of 32, I didn’t expect to share my life with the world. Honestly, I didn’t want to. At heart, I am an intensely private person who tends to keep most people at arm’s length so that they don’t see what a mess I am. But it’s difficult to write fiction and not put something of yourself into it. Which is what happened when I wrote my fourth book.

We Are the Ants came out in 2016, and it is the story of Henry, a boy who is frequently abducted by aliens and is dealing with the aftermath of his boyfriend’s suicide. As soon as the book came out, readers wanted to know which character I most identified with—Henry, the narrator, or Diego, Henry’s love interest. It surprised people when I answered that it was actually Jesse, Henry’s boyfriend who ended his life prior to the story’s beginning, with whom I felt the closest connection.

When my next book came out, I was disappointed that sales weren’t as strong. They were good by any metric, and the critical response was outstanding, but the book wasn’t nearly as successful when compared to We Are the Ants.

The same pattern continued for my next couple of books. At the Edge of the Universe explored relationships and fear of the unknown, The Apocalypse of Elena Mendoza looked at free will versus predestination, The Past and Other Things That Should Stay Buried was a lighthearted postmortem of a bestfriendship…with zombies.

I was and am proud of each and every one of those books, but none were as successful as We Are the Ants. In fact, often when I went to festivals or schools, We Are the Ants was the only book people wanted to talk about. They wanted to talk about my depression and my attempted suicide. After a while, I began to feel like I was performing my trauma for readers. As if I only mattered so long as I was the author with depression who had attempted to end his own life once upon a time. I feared that that part of my story was all anyone cared about or wanted to know.

Ironically, I decided as I neared the twentieth year since my attempted suicide to write a young adult memoir detailing my teenage years struggling with depression and my sexuality. I definitely wanted to write it because I thought hearing my story might help a teen who was struggling to know they weren’t alone. That was the primary driving factor behind the decision. But there was a small part of me that thought if I gave readers this story then maybe I could finally escape it.

Okay, I know it probably doesn’t sound logical, but it seemed rational at the time. I hoped that by putting my story out there—all of it, unfiltered and raw—they could just read the book and wouldn’t need me to answer questions anymore. I would be free to write about other things. Or maybe it would be the end of my career. I didn’t know. All I knew was that I couldn’t spend the rest of my life feeling like my value to the book community was tied to my trauma.

I structured Brave Face around my attempted suicide. Everything in the book led to that moment, and the memoir ended shortly after the attempt. I knew that, after the memoir came out, I was still going to have to talk about it, but I felt a sense of relief because I could see the end of the tunnel. I felt like I could put that part of me away again.

And then Brave Face was published, and I waited.

I assumed this was going to be the end of my career as a young adult writer. I assumed that my value was tied to my depression and my attempted suicide, and that by trying to move beyond it, neither I nor my stories would hold any more interest to readers. I kept working, but I didn’t expect much. I thought I would probably begin the slow decline into obscurity that would end with me returning to a job in an office somewhere.

But then I got an email from someone who’d read Brave Face.

I didn’t understand. What happened after what?

More emails came in. People wanting to know what I did after I was released from the psychiatric hospital. Had I found love? Was I still friends with Madelyne? Did I ever thank the teacher who told me to keep writing? One person even suggested that I had started my memoir in the wrong place. “I just thought that where you ended really should’ve been where it began.”

At first, I was annoyed. Hadn’t I given readers what they wanted? Hadn’t I gotten up on stage and performed my trauma for them? Why wasn’t this enough?

In addition to being private, I’m also notoriously slow on the uptake. It took me a while to realize what these readers were asking for and what it meant.

I thought We Are the Ants was my most popular book because I had exposed a traumatic part of my life. I believed that my depression and my attempted suicide, were what gave me value to the community. And I was right. But I was also wrong. Readers loved that book best because I had revealed a part of myself to them. Because it was honest. And they’d responded to the same honesty in Brave Face by asking for more.

My value to the community and to readers wasn’t about my trauma, it wasn’t about my pain, it was about my honesty. It wasn’t my depression or my attempted suicide that defined me in their eyes, it was my willingness to tell the truth.

I’d spent so long trying to avoid talking about my attempted suicide and my depression because I didn’t want those things to define me, I didn’t want them to be the only things people saw when they looked at me, but the one reader had the right of it.  My attempted suicide was never where my story ended, it was just one chapter in a much bigger story, no more important than the rest.

Our value isn’t defined by any single story. We are all of us volumes, filled with countless stories, some of them funny, some tragic, some the kind of story you wouldn’t want your mother to read. But no one story is more important than the others. The story of my attempted suicide wasn’t the entire story of my life, and it isn’t the story of yours either. 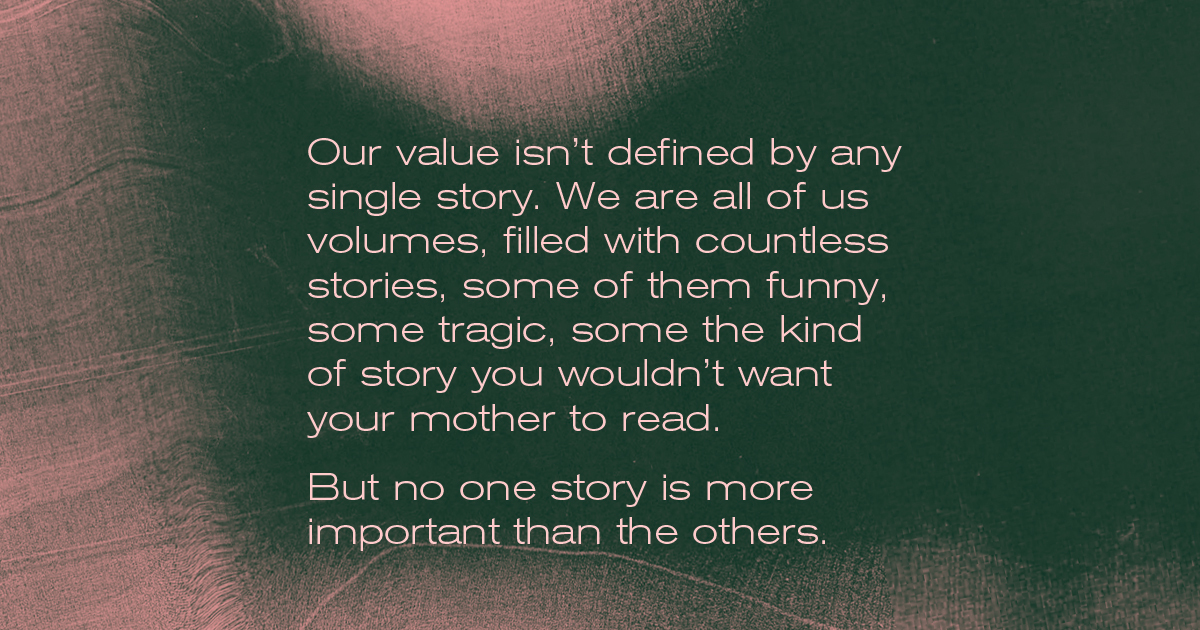 Today was the first day of the rest of my life and I was spending it crying on a therapy horse named Ty, my tears mixing with the dirt that clung to him. I was beyond rock bottom.