I sat in a reclining chair staring at unfamiliar machinery and people, unsure what to expect. My fingers tapped nervously on my lap as I waited for the treatment to begin.

A few months earlier, I had asked my psychiatrist about Transcranial Magnetic Stimulation (TMS), an alternative to antidepressants. He immediately said, “Oh yeah, you’d be a perfect candidate for that!” I’d be a perfect candidate for that? This psychiatrist wasn’t the best match for me, but could he not see the incredulity on my face? I had been on all sorts of medications for almost the past decade. SSRIs, SNRIs, anti-anxiety medication, anti-psychotic medication (incorrectly prescribed), bipolar medication (also incorrectly prescribed), and who knew what else.

While my depression had been mostly under control for a while, in recent months, I was heavily depressed in a way that felt significantly worse than before. I went outside less than once a week, avoided interacting with friends (which was made easier by the pandemic), slogged through work, and barely even managed to find the energy to talk to my partner.

In a fit of desperation, I mustered up enough motivation to research treatment options, where I came across TMS. TMS uses magnetic stimulation to non-invasively impact areas of the brain to improve mood. It’s heavily advertised as a treatment for “medication-resistant depression.” That sure seemed like me.

For inexplicable reasons, I was embarrassed to bring it up to my doctor. When I did gather my courage though, his reaction angered me. Why was I the one who had to do the research and come to him with a treatment suggestion? Why didn’t he suggest this instead of continuing to prescribe me new medication both of us knew wouldn’t help me?

While he had only been my psychiatrist for a few years and never prescribed any of the medications that went against my diagnoses, he had been unsuccessfully prescribing me different SSRIs and SNRIs for the past several months. Even he was never hopeful about these medications.

“TMS is a huge time commitment though, so let’s try one more medication first if that’s okay with you. You can try Effexor. It’s similar to the Cymbalta that you’ve already tried, so my hopes aren’t high, but might as well.” I stared at him blankly through Teams and wondered why I was supposed to try another medication if even he didn’t think it would work. I didn’t feel empowered to do anything but nod and go to the pharmacy to pick up my new prescription though.

As expected by both of us, the new drug didn’t work. After a couple more months, my doctor agreed that I should seek out TMS options. My anger was growing.

Even after seeing various psychiatrists for the past decade, it’s only in the last year or so that I’ve started learning that most psychiatrists are heavily influenced by the pharmaceutical industry. While it’s no individual psychiatrist’s fault, their training and methodology aren’t holistic and primarily focus on drugs. I’m not anti-medication. Medication can and does work (even for me, Wellbutrin has been helpful for mood, energy, and motivation). There are so many other treatments out there that have been scientifically proven to be more effective though (for depression specifically), and it’s baffling to me that the burden of advocating for these treatments often falls on the patient.

My parents are immigrants from India and when I first entered the world of psychiatry and therapy at 15, it was a completely new experience for them as well—and at the time, not necessarily an experience they wanted any of us to enter. How could they know when to question the doctors and when not to? How could I?

Pushing past the anger and shock of this realization though, I looked up nearby TMS centers and settled on one. They had good reviews and were soon opening a location close to where I lived. The initial intake was with a woman over the phone to assess my eligibility for insurance purposes.

“How many anti-depressants have you tried before?”

“More than three?” she asked.

“Oh, yes, definitely. Let’s see, there was Zoloft, Lexapro, Paxil, Cymbalta, Wellbutrin, Brintellix,” I trailed off. “I know there were more, but I just can’t remember.”

“Well, that sure is quite a lot already,” she said kindly. “You will definitely qualify for TMS. Just be as thorough as you can on the intake form and add an appendix. There won’t be enough space for the number of meds you’ve tried.”

I ended up listing fourteen different medications on my form and I’m sure there were still others I couldn’t recall (my medical records are a mess and scattered between many doctors and pharmacies, seemingly impossible to collect all of them—yet another aspect of the medical industry I wish were different). Insurance approved me.

Although I was frustrated no one had suggested this earlier, I still went in not expecting much. For the first few weeks, I didn’t notice any changes. I was scoring very high on my weekly depression inventories. The physical pain during treatments was much higher than I expected (I was told to expect “mild discomfort”—that wasn’t true). The only difference was that I was forced to leave the house every weekday (the pandemic transitioned me to working from home so my job no longer did that), so I would go on a walk right after my treatments.

After about a month though, I noticed I was starting to have more energy. My walks began to include some running (running! I hadn’t done that since high school almost seven years earlier!). I got back into tennis, something I previously loved dearly, but also gave up after high school. The amount of television I was watching decreased—television I was mostly watching for the purposes of numbing. I started spending more time with friends and making new ones (something I had been wanting to do since moving to Seattle a few years earlier but never found the energy for). And my weekly depression scores were dropping. At some point, I was so shocked by how low it was I didn’t believe it was possible (surely, I must be adding wrong). It was true though. 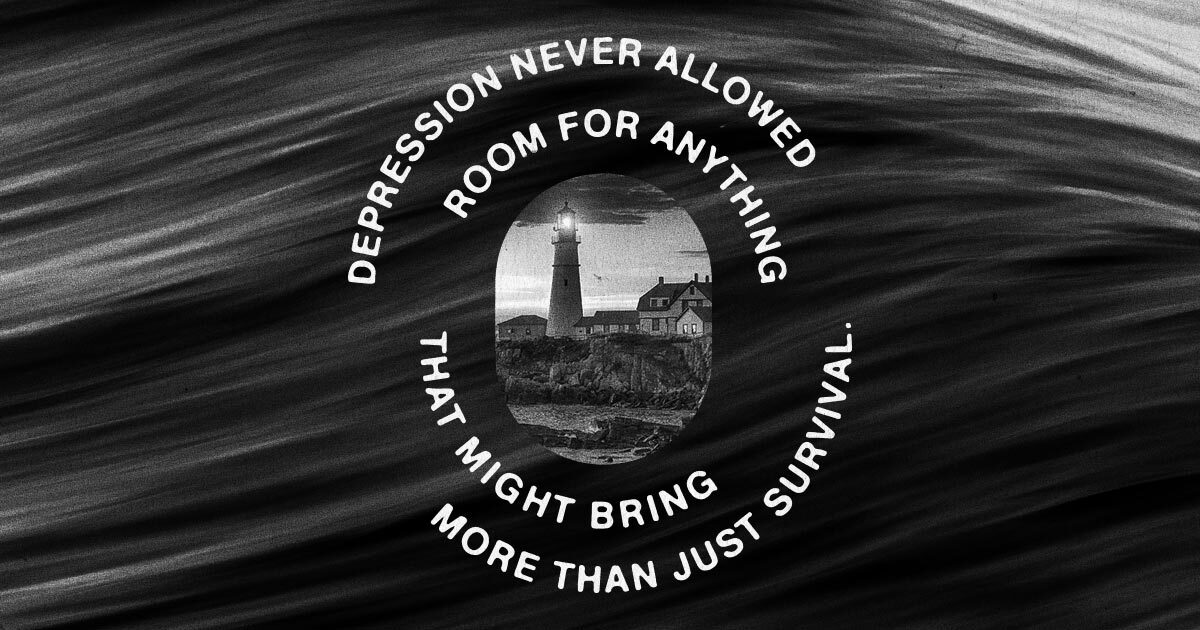 TMS hasn’t been a perfect remedy. I’ve done two refreshers since, one successful, one not. But it’s been a glimmer of hope after so many failed alternatives. It gave me back parts of myself that I thought were lost forever. Ever since I first got my depression partially under control close to a decade prior, I felt that I had to choose between taking care of my mental health and cultivating other areas of my life. Anything beyond what I viewed as essential (school/work/maintaining relationships) was something I couldn’t even begin to imagine having the energy for.

I spent my late teens and early twenties in this mindset—depression never allowed room for anything that might bring more than just survival. As frustrating as it is that I had to fight for it myself with seemingly not enough guidance from professionals, I’m grateful to myself for finally actively advocating for my health. I’m grateful that I’ve finally learned how to voice my discomfort and skepticism to professionals in order to work with them to find a better solution. I’m grateful that this experience pushed me to find a new psychiatrist and therapist when I secretly knew that the ones I had weren’t working for me. I’m grateful that I’ve been able to apply these lessons to my physical health as well. And I’m grateful that it didn’t take even longer for me to realize that it is possible to have a life filled with so much more than I imagined.

You are not weak for wanting or needing support. If you’re seeking professional help, we encourage you to use TWLOHA’s FIND HELP Tool. If you reside outside of the US, please browse our growing International Resources database. You can also text TWLOHA to 741741 to be connected for free, 24/7 to a trained Crisis Text Line counselor. If it’s encouragement or a listening ear that you need, email our team at [email protected].