My 15-year-old son was asked to leave private school before the end of the 1st semester. They are vague on the reasons: “He’s not thriving.”

He has ADHD (attention deficit hyperactive disorder)  and anxiety, for which he is medicated (though finding the right dosage has been complicated). ADHD, for him, comes with a host of intolerable issues. He’s disruptive, distracting, and distracted. He blurts out thoughts impulsively, then is inattentive to the reactions of those around him. When he’s missing or falling behind on academic work, he starts to feel bad about himself—that’s when the anxiety kicks in.

He’s also suicidal. This summer, he had a plan, he had a method, he wrote a note stating he felt like life wasn’t worth living and that things would be better if he wasn’t alive. He’s got a team of people who care about him: family, friends, doctors, a psychiatrist, a therapist; we are working to keep him alive. He’s still here and he still struggles.

One of the complaints the administration expressed in the parent meeting where they asked us to withdraw, is that he talks negatively—about life, about himself. He happened to mention his suicidal thoughts in classes, to some of his teachers, to some friends, to the school psychologist. We were told, “It makes others feel uncomfortable when he brings up suicide.”

The stigma is real.

And it’s perpetuated by those who would rather uphold the image of a pleasant and positive culture than openly acknowledge a depressed person. Especially when that depressed person doesn’t manifest their feelings in a way that makes others comfortable. He’s the “wrong kind” of suicidal because his feelings are too big or too much. He’s not gently confessing a struggle with optimism or organizing a rally for awareness.

Why can’t he say it in a way that’s more palatable? Because he’s barely surviving under the weight of his own thoughts.

His teachers said to the administration, “It’s easier to teach when he’s not around.” Let me repeat that to you: teachers of a suicidal child commented that it’s better for them if he’s not around. Even if they never said this directly to him, he felt their desire to disengage.

If he could have packaged and presented his thoughts and feelings “better,” he would have. He doesn’t want to feel this way. Pointing out his inability to reason or be positive when he’s in the throes of a battle with his own mind is not only futile, it’s dangerous and cruel because it leads him away from the help he is seeking. At the darkest time in his life, what is he being taught? That adults who are charged with caring for and guiding him in wisdom until he has the footing of maturity will instead abandon him to protect their own comfort.

He is a drowning kid, expected to teach himself how to swim and make it to shore. 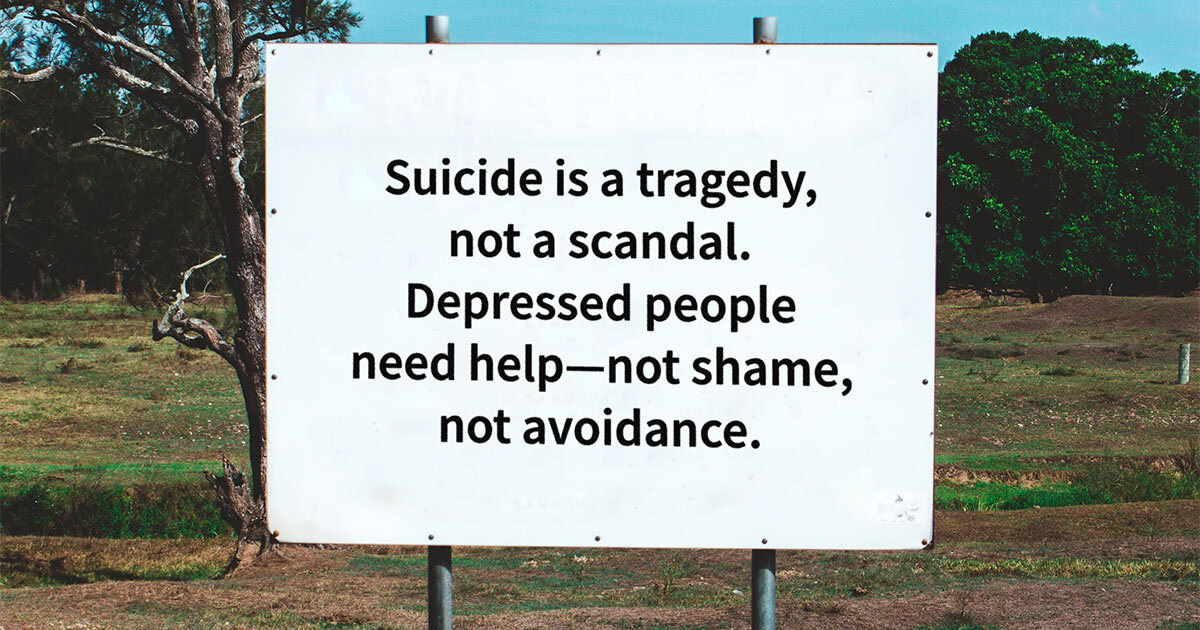 And here’s the scary part: he’s not the only one.  I don’t know anyone who doesn’t know someone with trauma or other mental illness caused or worsened by the pandemic. And ours is a kid with all the resources—a fact which he feels guilty about. This is another by-product of society’s messaging: ‘focus only on the positive’; ‘you have so much to be grateful for’; ‘so much in your life is amazing.’ This has added to his guilt over why he can’t conquer these anxious thoughts and intrusive feelings of hopelessness.

Take heart, kiddo. There is hope in telling the truth.

What would happen if instead of telling “negative” or “difficult” kids that their outcries were disruptive and made people feel uncomfortable, we told them they have a right to feel all the complicated emotions and not just the pretty ones? His teachers expected him to turn those things off in class while learning facts and keeping an organized notebook. We can teach kids that we want them to smile at all times, but until we are willing to take an honest look at our human condition, the startling beauty and struggles of neuro-diversity, and real emotional responses to worldwide and personal traumas—we are failing them.

Did I expect more from this school? Yes. Institutions are made up of people who make decisions that affect the lives and well-being of others. As I told him, even if this school wanted him back, after that meeting, I wouldn’t let him spend one more minute there. But this has also illuminated some worrisome habits of our society—specifically, an inclination to dismiss anything that isn’t convenient as “bad.”

Suicide is a tragedy, not a scandal. Depressed people need help—not shame, not avoidance. We should, we MUST keep kids from taking their own lives, but we cannot put the burden of overcoming mental illness on those still struggling. They need teammates and helpers and mentors and teachers and friends to check in on them, to ask—with no expectation of a polite, curated response—“How are you doing today, really?”

Let’s accept that asking for help won’t always have good timing, be pretty, or be worded in a way that is pleasing to others. But it is worth asking for.

Between the Bells is TWLOHA’s one-week interactive program designed for high school students to spark conversations about mental health and to remind those struggling they’re not alone. Learn more here.

Depression has a way of making us feel incredibly isolated. We’re here to remind you of the truth that you are not alone. We encourage you to use TWLOHA’s FIND HELP Tool to locate professional help and to read more stories like this one here. If you reside outside of the US, please browse our growing International Resources database. You can also text TWLOHA to 741741 to be connected for free, 24/7 to a trained Crisis Text Line counselor. If it’s encouragement or a listening ear that you need, email our team at [email protected].